The effect of early diagnosis and treatment on maternal and fetal outcomes in patients with HELLP syndrome?

Background: HELLP syndrome, a severe form of preeclampsia clinically characterized by hemolysis, elevated liver enzymes, and low platelet count, was first described in 1982.
Materials and Methods: To assess the impact of recognition of this syndrome on fetal and maternal outcomes, we conducted a retrospective study and reviewed the records of patients with preeclampsia treated at Mayo Clinic before and after 1982. We made a retrospective diagnosis of HELLP in 11 of 146 patients treated for preeclampsia prior to 1982. We compared pregnancy outcomes to a randomly selected group of 24 women with HELLP syndrome treated at Mayo Clinic between 1986 and 1994.
Results: We did not observe a statistically significant difference in maternal demographics or diagnostic laboratory findings. Prior to 1982, fetal mortality was significantly higher. The incidence and severity of acute renal failure and other cumulative maternal complications (including pulmonary edema, pleural effusion, pericardial effusion, intracerebral hemorrhage, seizure, hepatic necrosis, and retinal detachment) were significantly higher prior to 1982. After 1982, the time from diagnosis to delivery was significantly shorter (2.5 vs. 14 days), and patients were more likely to receive seizure prophylaxis with magnesium sulfate. There was a trend towards more Caesarian sections and labor induction in women treated after 1982.
Conclusions: These observations suggest that recognition of HELLP as a distinct clinical syndrome has led to improved outcomes of pregnancies, probably due to more timely diagnosis and earlier termination of pregnancy.

Preeclampsia is a pregnancy-specific disorder clinically characterized by hypertension (blood pressure ≥ 140/90 mm Hg) and proteinuria (≥ 300 mg in a 24-hour urine). It affects approximately 5% of pregnancies and remains a leading cause of both maternal and fetal morbidity and mortality worldwide (1). The etiology and pathogenesis of this disorder remain elusive, resulting in a failure to develop specific preventive and treatment options. The clinical spectrum of this disease covers a wide range of presentations, from mild forms of hypertension and proteinuria, to severe forms such as eclampsia, the convulsive form, and HELLP syndrome. The acronym HELLP (for Hemolysis, Elevated Liver enzymes, and Low Platelet count) was coined in 1982 (2), and refers to the specific laboratory abnormalities that are characteristic of this form of preeclampsia. It is noteworthy that hemolysis and low platelet count have been recognized as complications of severe hypertensive disease in pregnancy for more than 100 years. HELLP affects approximately ten percent of all pregnancies with preeclampsia/eclampsia. In 70% of patients, HELLP syndrome develops antepartum, in the second or third trimester of pregnancy, and in up to 30% it develops postpartum. It is commonly heralded by neurological symptoms and signs, epigastric or right upper quadrant pain in 80-90%, a systolic blood pressure > 160 mm Hg or a diastolic blood pressure > 110 mm Hg in 50%, proteinuria in 94%, and acute renal failure in 7.4% of patients (3,4,5). Medical treatment typically consists of magnesium sulfate seizure prophylaxis (6) and hypertension treatment for a blood pressure > 150/100 mm Hg.
Studies of maternal outcomes in pregnancies complicated by HELLP syndrome have demonstrated increased risks for disseminated intravascular coagulation, placental abruption, acute renal failure, pulmonary edema, subcapsular liver hematoma, and retinal detachment (7,8). Consequently, the presence of HELLP syndrome since its initial description has been considered a major indication for immediate delivery. Therefore, little is known about the natural course and pregnancy outcomes in untreated patients, i.e., those treated conservatively, despite the presence of clinical signs and laboratory abnormalities that are indicative of this syndrome.
The objectives of this study were i) to study the natural course of HELLP syndrome in patients who were treated for preeclampsia prior to 1982, before its recognition as a distinct syndrome, and who, in retrospect, met the diagnostic criteria, and ii) to study whether an increased awareness of HELLP syndrome after 1986 resulted in more timely diagnosis, earlier treatment, and hence improved maternal and fetal outcomes.

The protocol was approved by the Institutional Review Board and all subjects had consented to the use of their records for research. Relevant clinical data were abstracted from the records of patients with preeclampsia treated at Mayo Clinic before and after 1982.
A retrospective diagnosis of HELLP in 11 of 146 patients treated for preeclampsia/eclampsia prior to 1982 was confirmed by the presence of microangiopathic hemolytic anemia, elevated liver enzymes, and thrombocytopenia, according to previously accepted diagnostic criteria (4,9) as follows:
Evidence of intravascular hemolysis:
-          Decreasing hemoglobin with at least one of the following:
-          Abnormal peripheral blood smear (schistocytes)
-          Elevated lactate dehydrogenase activity (LD), greater than 600 U/L
-          Elevated total bilirubin, equal or greater than 1.2 mg/dL
Elevated liver enzymes:
-          Aspartate aminotransferase (AST), greater than 70 U/L
-          LD, greater than 600 U/L
Low platelet count:
-          Platelet count lower than 100 x 109/L
Based on the same set of criteria, the diagnosis of HELLP was verified in a randomly selected group of 24 women treated for HELLP syndrome between the years 1986-1994. The year 1986 was chosen as the lower range for the control group to allow several years for HELLP to become a universally recognized syndrome requiring urgent attention. Of note, all the patients had a coexisting diagnosis of preeclampsia, as defined by a blood pressure (≥ 140/90 mm Hg) and proteinuria (≥ 300 mg in a 24-hour urine) (1). Perinatal mortality included deaths occurring during late pregnancy (at 22 completed weeks of gestation and over), during childbirth, and up to seven completed days of life.

The following data were collected: maternal age, gestational age, mode of delivery, maternal mortality, intrauterine fetal death, maternal complications (pulmonary edema, pleural effusion, pericardial effusion, intracerebral hemorrhage, seizures, abruptio placentae, hepatic rupture, and retinal detachment), time from diagnosis to delivery, seizure prophylaxis with MgSO4, and laboratory results. Acute renal failure was defined as an increase in serum creatinine of 1.5 times, or a decrease in the glomerular filtration rate by more than 25%, compared to baseline (10). There was no difference between groups with respect to disease severity as determined by the Mississippi classification, which uses the platelet count to define HELLP syndrome as severe (≤ 50 x 109/L), moderate (50 - 100 x 109/L), or mild (> 100 x 109/L) (11). In addition, maternal demographics and diagnostic laboratory values were similar between the groups (Table 1).
Table 1. Maternal characteristics and diagnostic laboratory data of HELLP syndrome. 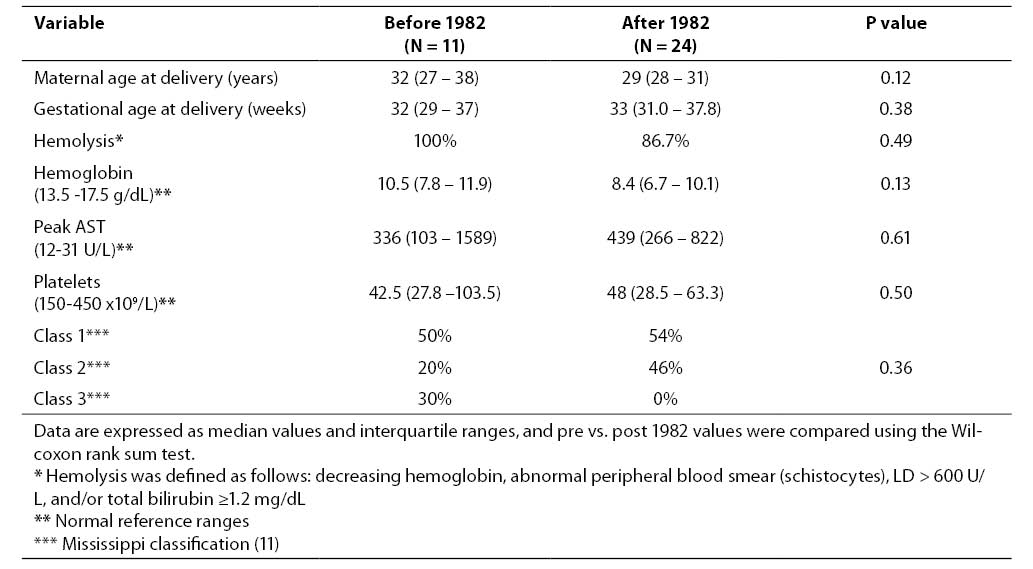 Descriptive statistics are reported for quantitative traits as medians and interquartile ranges, and for categorical traits as percentages. Statistical procedures included the Wilcoxon rank sum test for continuous variables, Fisher’s exact test for categorical variables, exact inference for ordered contingency tables, and the Kaplan-Meier method was utilized for time to event analysis. A P value of < 0.05 was pre-specified as being statistically significant.

Prior to 1982, significantly more women with HELLP syndrome developed renal failure (63.6% vs. 20.8% P = 0.02). The median peak creatinine was higher in these patients as well (1.45 mg/dL vs. 0.95 mg/dL, P = 0.007). There was no difference in the number of women requiring dialysis (1 of 11 vs. 0 of 24, P = 0.3).
In addition to renal failure, we also calculated a “complication score” that was the sum of all other complications recorded in the medical record. Complications included in this score are pulmonary edema, pleural effusion, pericardial effusion, retinal detachment, hepatic necrosis, intracerebral bleeding, and seizure. We found that women treated prior to 1982 had a significantly higher number of total complications (P = 0.012), and that the total number of women with any complications was significantly higher in this group (54.6% vs. 12.5% P = 0.015), (Table 3).
Table 3. Comparisons of maternal complications between the two groups. 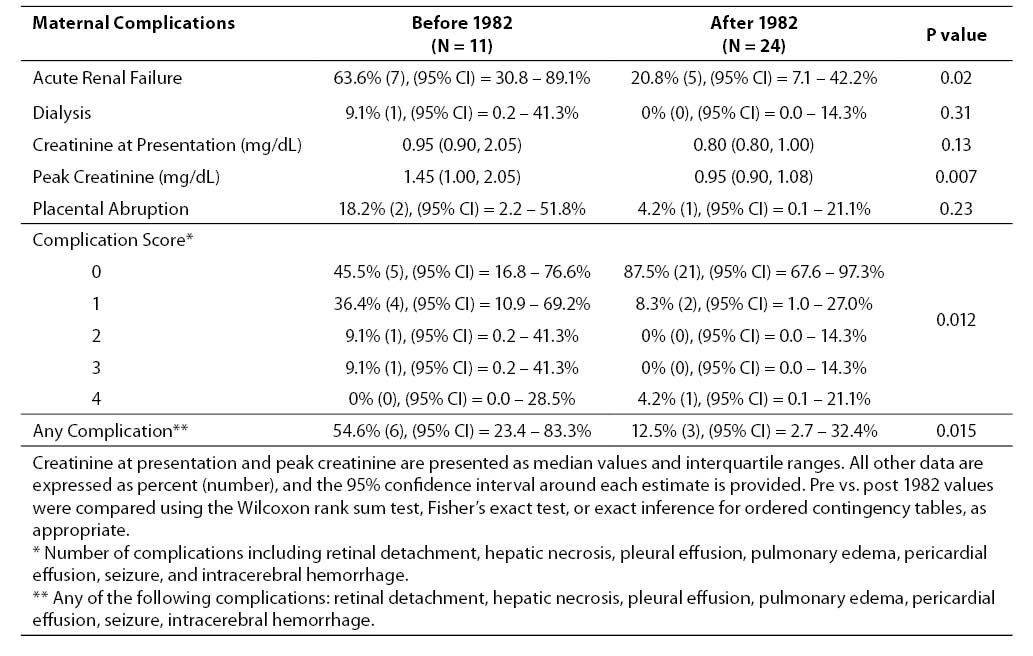 After its recognition, the treatment of women with HELLP syndrome changed. Most importantly, there was a significant decrease in the length of time between presentation and either live birth or delivery of a stillborn infant (14 days pre-1982 vs. 2.5 days post-1982, P < 0.001). After 1982, there was a marginally significant trend towards more women being delivered by induction or Caesarian section versus spontaneous delivery (P = 0.08). More women were treated with magnesium therapy for seizure prophylaxis as well, although this may reflect practice changes over time independent of the recognition of HELLP as a syndrome (Table 4).
Table 4. Comparisons of practice differences (time to and mode of delivery, magnesium sulfate prophylaxis) between the two groups.

In summary, we conclude that the recognition of HELLP syndrome as a deceptive and severe form of preeclampsia in 1982 has since resulted in improved maternal and fetal outcomes, mainly due to the widely accepted practice of immediate delivery. As it is manifested as a combination of laboratory abnormalities, including hemolysis, abnormal liver tests, and thrombocytopenia, the role of laboratory professionals in the diagnosis, serial monitoring, and therapy of these patients increasingly is recognized (9).