Background: The pathogenesis of Dupuytren’s disease is unclear, but inflammatory mechanisms might be supposed in the background.

Materials and methods: The ratios of the subsets of monocytes and lymphocytes in the peripheral blood were measured according to the stage of the disease of 39 Dupuytren’s patients. They were compared with those of 29 healthy, age-matched controls. The measurements were accomplished by flow-cytometry.

Conclusions: Our results support the previous considerations that lymphocytes are involved in the pathogenesis of Dupuytren’s disease and enhance the role of monocytes, NK-like T-cells and the alteration of immune response between the stages of the disease.

Dupuytren’s disease (DD) is a chronic disorder, characterized by development of nodules and cords in the palmar and/or plantar aponeurosis. These pathologic changes arise from a fibrotic process, but the exact mechanism of contracture is unclear. Chiu and McFarlane (1) reported a clinical-pathological description; the three stages of the disease were recognised as early, active and advanced stages.

Previous reports have indicated that inflammatory mechanisms may be involved in the pathogenesis of DD. A number of authors reported that nodules contain inflammatory cells; mainly lymphocytes and macrophages (2). An increased frequency of activated (HLA-DR+) T-lymphocytes were also detected in the biopsied tissues (3). The elevated ratio of activated T-cells has been found in the peripheral blood of patients with DD, as well (4). The role of cytokines with T-cell origin was also proved. Transforming Growth Factor-β (TGFβ) induces the transformation of fibroblasts into myofibroblasts that are responsible for the shrinkage of aponeurosis (2). A significant association was found between DD, HLA-DR3 and autoantibodies to types I-IV collagen (5).

Our aim was to investigate the participation of inflammatory mechanisms in the pathogenesis of DD and explore the distributions of monocytes and lymphocytes’ subsets according to the stages of DD.

A total of 39 adult male patients with DD aged between 45 and 69 (57 ± 12) years and a group of 29 age-matched, healthy male volunteers were included in this study. Those patients were excluded from the study, who suffered from any infection or from an internal disease as autoimmune disease, diabetes mellitus, cirrhosis hepatis, epilepsy, known malignancies. The patients were grouped according to the classification of Chiu and McFarlane on the basis of clinical and pathological classification, and were designated as early, active and advanced stages (1). 23 patients out of the whole Dupuytren’s group were in active stage (stage 2) with nodular thickening of the palmar fascia associated with joint contracture. 16 patients were in advanced stage (stage 3) with progressive joint contracture. No patients were observed in the early group having nodule only in the palmar fascia (stage 1). In 36 cases only one hand was involved. Both hands were affected in 3 patients. The lesions were found essentially at the fourth and at the fifth ray. Patients were recruited at the Traumatology outpatient’s room of Markusovszky Hospital in Szombathely. The sampling did take 2 years until 2007. The study was performed in accordance with the Helsinki Declaration and the research protocol was approved by the local ethical committee and all patients gave their informed consent to participate.

Cells were first counted and then diluted in PBS buffer to a concentration of approx. 107/mL. Monoclonal antibodies conjugated with fluorescein isothiocyanate (FITC) or phycoerythrin (PE) were added in the recommended volume on the manufacturer’s data sheet. The specificity and combinations of applied monoclonal antibodies were as follows: CD45/CD14, IgG1/IgG2 - isotype controls; CD3/CD19, CD3/CD16+56, CD3/CD4, CD3/CD8, CD5/CD20, CD3/HLA-DR, Kappa LC/CD19, Lambda LC/CD19. All reagents were purchased from BD Bioscience (San Jose, CA, USA). 100 µL of diluted cell suspension was added to the prepipetted antibodies and incubated for 15 minutes on ice in the dark. Then, the erythrocytes were lysed at room temperature. Fluorescence data were acquired on a FACScan flow-cytometer and analyzed with CellQuest software (BD Bioscience). 10,000 events were collected from each sample. 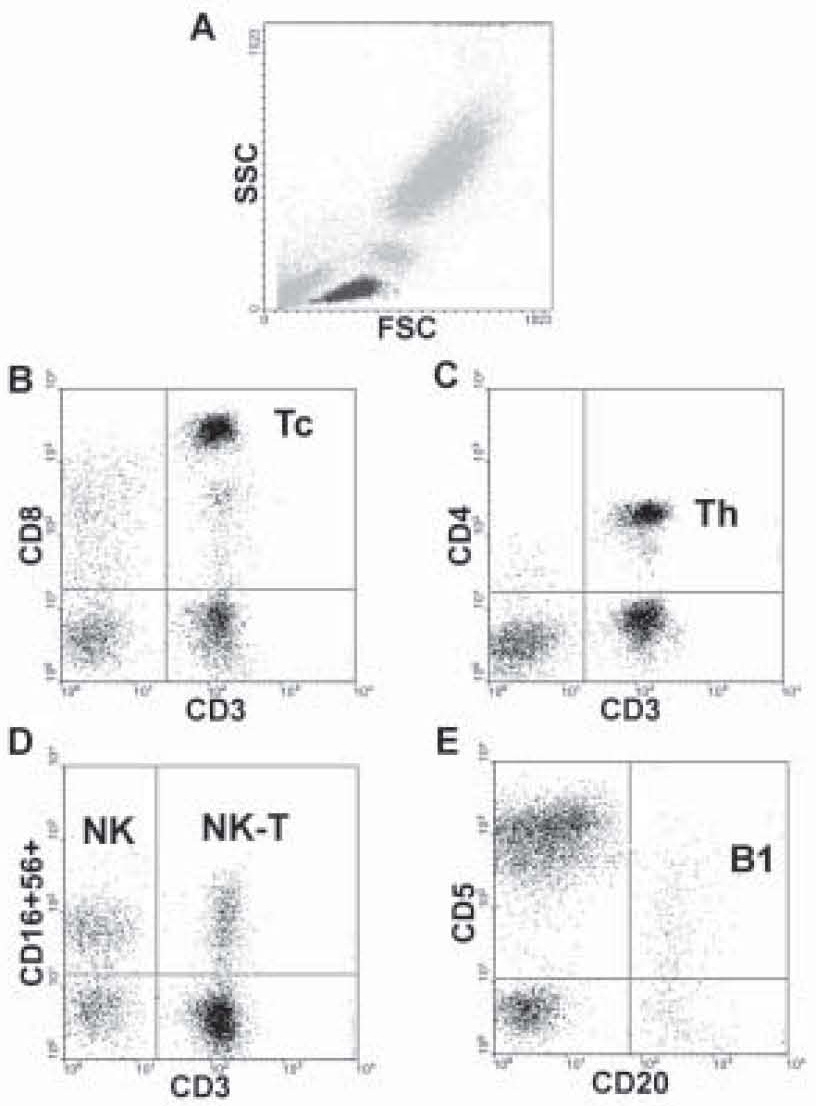 Results are expressed in the percent of the total leukocyte number and in the calculated absolute cell-counts. Results are presented as mean ± standard error (SE). One-way analysis of variance (ANOVA) was used for statistical analysis followed by a post-hoc paired comparison (LSD) test. A probability level of <5 % was accepted as significance. Statistica for Windows program package was used for all statistical analysis, by 95% confidential interval.

In 4 patients of the Dupuytren’s group mature, indolent lymphoid malignancies, such as B-cell chronic lymphocytic leukaemia (CLL) and T cell granular lymphocytic leukaemia (T-LGL) were proved by immunoglobulin light chain restriction and/or abnormal immunophenotype, whilst such a disease was not found in the healthy group. The lymphomas were in an early stage without any clinical sign.

These haematological cases were excluded from the further analyses. The statistical differences among controls (N = 29), and patients in Dupuytren’s stage 2 (N = 21) and stage 3 (N = 14) are shown in the Tables 1 and 2.

Table 1. Comparison of monocytes, B-lymphocytes and NK-cell counts between controls and Dupuytren patients.

Table 2. Comparison of T-lymphocyte counts between controls and Dupuytren patients.

We observed different and characteristic changes in numbers of peripheral blood lymphocytes and monocytes according to clinical stages of DD. In active stage, monocytes and NK-type T-cells increased significantly. Similarly, CD4+, CD8+, activated T-cells and NK-cells rose also, but these alterations were not significant. These findings support the previous observations that T-cells are involved in the pathogenesis of DD (3, 4). Monocytes, NK-T-cells and cellular immune response according to stages of DD were not investigated by this time.

A significant reduction of B-lymphocytes, including the so-called B1-cells (CD5+) was also here shown, which correlates partly with the results of Gudmundsson et al (4). They found a decrease in the ratio of CD5+ B-cells. Our previous observations about the presence of antinuclear antibodies refer also to the involvement of B-lymphocytes in DD (6). Fibrotic diseases, e.g. pulmonary fibrosis, hepatic fibrosis, systemic sclerosis are associated with anti-inflammatory T helper 2 (TH2)-cell responses (7-10). TGFβ is one of the most important cytokines of TH2 mediated immune response. The significance of TGFβ in Dupuytren’s disease was proved by more authors (10-12). Macrophages are one of the main sources of TGFβ and macrophage-derived TGFβ is thought to be pro-fibrotic (13). Increased ratio of monocytes in DD may ensure permanent supply for macrophages in the affected tissue.

NKT-cells are able to secret typical TH2 cytokines, e.g. IL-13 (14). The activation of TGFβ1 depends on the matrix metalloproteinase-9 (MMP-9), upregulated by IL-13 that cleave the latency-associated peptide (15). In experimental models of autoimmune diseases, NKT cells protected from diabetes or experimental autoimmune encephalomyelitis by shifting the balance from TH1 toward TH2 response (16,17).

In the advanced stage, the ratios of CD4+ T-cells and NK-T-cells fell significantly, while that of CD8+ and HLA-DR+ T-cells decreased not significantly. The ratios of monocytes, B-lymphocytes remained constant compared with those in the active stage. The lowering tendency of T-cells is tempting to be speculated as part of an anti-inflammatory reaction that can be the final result of the TH2 mediated immune response. Taken together, our data may refer to a TH2 mediated immune response associated with massive fibrosis in the pathogenesis of DD. It should, however, be emphasized that by this time we have not investigated directly the cytokine profiles of T-cells in DD.

We conclude that monocytes, T- (especially NK-T) and B -lymphocytes are likely involved in the pathogenesis of Dupuytren’s disease and alteration in their numbers may refer to an ongoing inflammatory mechanism. Further studies, however, should be launched to investigate the aponeurosis infiltrating T-lymphocytes, the distribution and cytokine profile of the peripheral blood T-lymphocytes in early stage DD patients.

We are indebted to Rita Jáger M.D. at the Hungarian Blood Bank for control blood samples and to Mrs. J. Gál and Ms. M. Horváth for technical assistance.

6.    Salamon A, Józsa L, Toldy E. The role of different factors in the pathogenesis of Dupuytren’s disease. Proceedings of the 8th Congress of the IFSSH. 2001;363-9.