Objective: Recurrent spontaneous abortion (RSA), the repetition of three or more consecutive abortions, occurs in approximately 1–2% of reproductive-aged women. It has been postulated that a number of repeated pregnancy losses may be related to immune causes. The purpose of this study was to determine the role of Interleukin (IL)-2 and Rheumatoid Factor (RF) in RSA.

Materials and methods: This case control study was carried out on two different groups. Group I consisted of fifty-six women with a history of three or more RSA and group II consisted of sixty-three healthy women who have had no abortion history, with at least one successful pregnancy. The sera were examined for the presence of IL-2 by ELISA method, and RF by latex agglutination test.

Conclusions: Serum IL-2 concentration does not affect pregnancy outcome, and the prevalence of RF in RSA women was higher than in normal controls. It is therefore recommended that the role of RF in pregnancy outcome should be investigated.

Recurrent spontaneous abortions (RSA) are still a frequent reproductive problem worldwide, with three or more affecting 1-2% of women of reproductive age (1). Despite several well established etiologic factors, the cause of RSA cannot be determined in almost 50% of cases. It has been postulated that a number of these repeated pregnancy losses may be related to immune causes (2). The response of T helper (Th) cells following activation is characterized functionally according to the cytokines they produce. Th1 cells secrete mainly interleukin (IL)-2, interferon (IFN)-γ and tumor necrosis factor (TNF)-β (3). IL-2 figures prominently among cytokines that are particularly related to the survival of the conceptus. Chaouat et al. (1990) showed that administration of IL-2 to pregnant mice causes abortion (4).

Rheumatoid factors (RF) are antibodies that recognize the Fc portion of IgG molecules as their own antigens. RFs can be of any immunoglobulin isotype (IgM, IgG, IgE). Most of the RFs measured clinically are of IgM class (5). Among healthy population, the frequency of RF positive individuals ranges from 1.3-4% in Caucasians to 30% in some tribes of North American Indians (6). A small subset of B cells that express CD5, known as B-1a cells, appear to produce RF (7). Many studies have illustrated the essential role of T cells in class switching where cytokine production has an important impact on the type of immunoglobulin produced by B cells (8).

The aim of this study was to compare the levels of IL-2 (Th1 cytokine) and RF in the sera of women having history of RSA with those of the control group.

This case control study was carried out on two different groups referred to Yazd Research and Clinical Centre for Infertility. Group I consisted of 56 women with a history of three or more RSA and group II consisted of 63 healthy women who had no abortion history, with at least one successful pregnancy. Abortion samples were normal in karyotype, TORCH negative and had no anatomical or endocrine problems, absence of anti-phospholipid antibodies of both IgM and IgG classes, anti-cardiolipin antibodies of IgM, IgG and IgA classes, and antinuclear antibodies of IgM and IgG classes. All cases were primary RSA. Demographic information such as age, number of abortions, gestational age at the last abortion for RSA women, and the number of pregnancies in control group were provided. The local Institutional Review Board approved experimental procedures, and signed informed consent was obtained from each participant.

The sensitivity of IL-2 assay was 3.5 pg/mL. The overall intra-assay and inter-assay coefficient of variation was calculated to be 5.2% and 8%, respectively. The presence of RF (anti-human immunoglobulin) was determined by a latex agglutination test (Bionic, Iran) according to manufacturer’s instructions and the presence of agglutination was considered positive. Positive samples were tested in different dilutions to 1/64 titers. 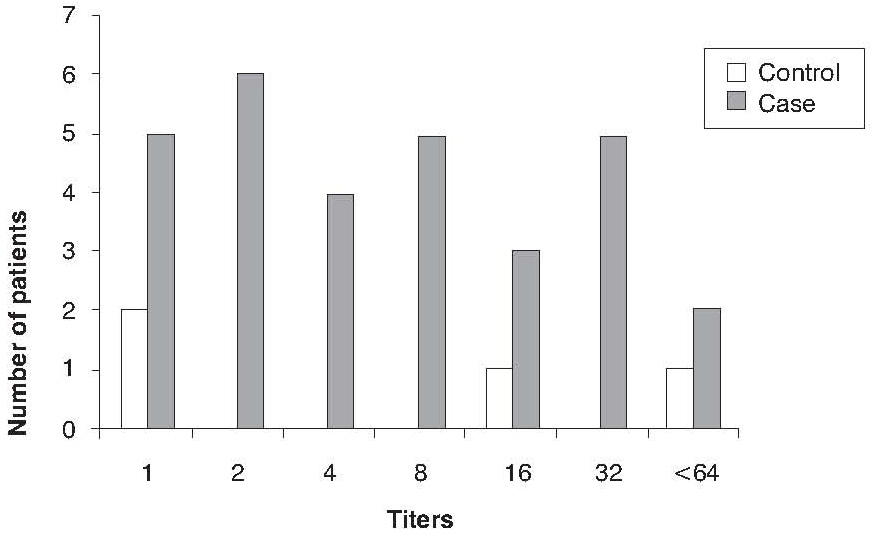 Figure 1. The frequency of RF titers in RSA (case) and control groups.

In recent years, some progress has been made in better understanding of recurrent abortion and in the offer of diagnostic tools and management. RSA is still the most common complication during pregnancy (9). Production of cytokines and distribution of immune cells during pregnancy may provide important information for predicting pregnancy outcome, e.g. the term or loss of pregnancy (10). In this study, we measured IL-2 cytokine in sera of women with history of RSA and in reproductive age-matched women without any abortion. Although we were unable to detect IL-2 in the sera of our control group, elevated concentrations of IL-2 in normal pregnancy as compared with non-pregnant controls have been reported (11). This difference in results may be related to the age of patients, detection kits, race and socio-economical status. Only two out of fifty-six women with the history of RSA were positive for IL-2 in serum. There are some studies which indicate that peripheral blood lymphocytes of women with RSA secrete increased concentrations of certain Th1 cytokines, such as IL-2 upon stimulation by mitogens or antigens when compared in women with successful pregnancy (12, 13). However, Th1 cytokine production is down-regulated during pregnancy (14). Our results failed to show similar profile of IL-2 production in the studied sera. As part of this research, also RF was measured in two groups. Our results showed that 53.5% of women with the history of RSA were positive for RF, and its level was significantly higher than in controls. It has been reported that some autoantibodies adversely affect the course of pregnancy and fetal growth (15). For RF, the only report referring to its increase during pregnancy is that of Ailus et al (16). 8.3% of women with RSA history that were studied by Iijima et al. had RF in their sera (17). RFs are autoantibodies associated with rheumatoid arthritis. They can be detected in normal individuals, although transiently. Recently, it has been shown that B cells which produce RF only do so when activated by two signals, one from engagement of the B cell receptor and the other from recognition of a pathogen-associated molecular pattern through a Toll-like receptor. These autoantibodies thus link the innate and acquired immune response (18). The roles of some infectious agents in recurrent abortions are well known. However, there might be some correlation between microbial abortion and RF production.

The results of this study showed that serum IL-2 concentration did not affect pregnancy outcome. However, the prevalence of RF was higher among patients with RSA than in normal women with no history of abortion. Therefore, it is recommended that the role of RF in pregnancy outcome should be investigated.

The financial support was provided by Shahid Sadoughi University of Medical Sciences. The authors are grateful to Mr Hossein Fazli for his technical assistance.

16.   Ailus KT. A follow-up study of immunoglobulin levels and autoantibodies in an unselected pregnant population. Am J Reprod Immunol 1994;31(4):189-96.