Determination of D-dimer by different quantitative assays – A harmonization exercise

Background: D-dimer determined by different assays shows considerable variability due to lack of standardization. We describe a harmonization exercise performed in an attempt to diminish this variability using plasma samples with high D-dimer concentration.

The concept of D-dimer measurement as an indicator of in vivo coagulation activation has been introduced more than two decades ago (1,2). Today, measurement of D-dimer has become an essential element in the diagnostics of deep vein thrombosis and pulmonary embolism (3-6).

It has been observed that the numerical assay results of different D-dimer assays vary considerably (7). This is mainly caused by the heterogeneity of fibrin degradation products in patient samples (8), as well as the specificity of the different antibodies used in these assays (9). D-dimer assays show different reactivity to different kinds of fibrin derivatives, such as high or low molecular weight fibrin derivatives, or cross-reactivity with non-cross-linked fibrinogen- and fibrin degradation products. Lack of standardization and different types of calibrators used by the manufacturers are additional issues that affect the assay results (10).

In an attempt to standardize D-dimer assays various standards such as purified D-dimer, whole blood lysate and X-oligomers have been used, but failed (11,12). Therefore, harmonization of D-dimer assays by using patient pooled plasma with a high D-dimer concentration as a reference preparation seems to be another option (13).

This approach to harmonization of quantitative D-dimer results by the use of patient pooled plasma with a high D-dimer value (14) was used at the University Medical Centre Ljubljana, where D-dimer assays are performed in several laboratories affiliated to different clinical departments. It was presumed that the harmonization procedure would increase the comparability of D-dimer results obtained in different laboratories of the same medical institution.

Harmonization and validation procedure and other calculations

For example, the harmonized value of sample V08 determined with Vidas D-dimer Exclusion (Table 3) was calculated as:

where 6831 mg/L was the raw result for sample V08 obtained with Vidas D-dimer Exclusion and 2037 mg/L was calculated as the harmonized result.

The variability of the results was expressed in percent as the coefficient of variation. Excel 97 (Microsoft Corporation, Orlando, Florida, USA) was used for all calculations.

Mean D-dimer concentrations (µg/L) in harmonization samples A-E for each assay obtained are shown in Table 1. Values of normal pool plasma obtained by each assay, which were deducted from raw values of samples A-E are also shown in Table 1. In Table 2 the slope, intercept and regression coefficients of the linear regression analysis through the assay specific values and the overall median line are shown.

Tablica 2. The slope, intercept and regression coefficients of the linear regression analysis through the assay-specific values and the overall reference median line

The highest D-dimer values were observed with Acute Care™ D-Dimer on Stratus CS, while approximately 18-26 times lower values were determined with D-dimer Plus on a BCT or BCS, with other D-dimer concentrations in between.

Table 3. D-dimer levels (µg/L) in validation samples V01-V15 obtained by different assays before and after harmonization. Coefficients of variation (CV) are shown for each validation sample. 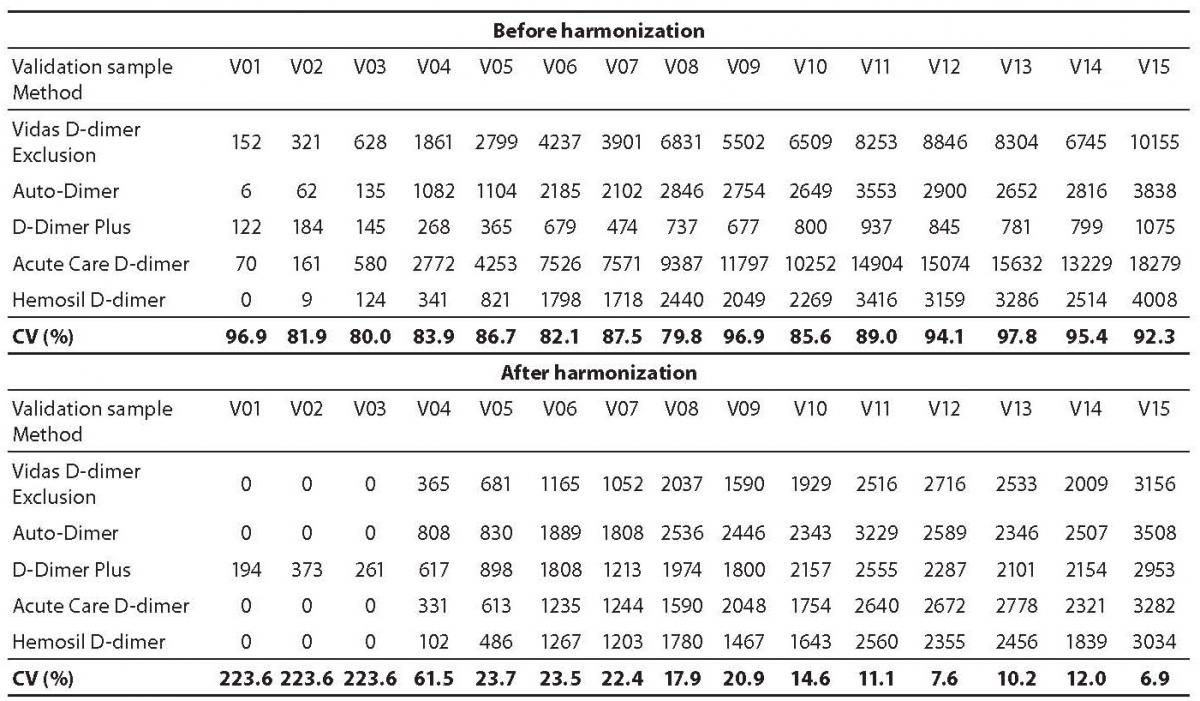 The present study showed, that harmonization of results of quantitative D-dimer assays with patient pooled plasma was possible, but was limited to high D-dimer values. In the range of D-dimer around the cut-off, harmonization did not decrease the variability of the results.

The initiative for harmonization was provoked by the fact that in the same medical institution several D-dimer assays are used. Since the results obtained with these assays are not comparable, management of patients might not be optimal if physicians are not aware of the differences between different assays and therefore the different cut-off values. Moreover, exchange of D-dimer results between different hospitals is hampered. It is recommended that due to differences in monoclonal antibodies, assay technologies, and calibration, the results of different D-dimer assays should not be used in clinical studies, and the assay used should be clearly stated not only in scientific publications but also in clinical routine, to allow appropriate interpretation of D-dimer concentration measured (10).

Since D-dimer antigen is not a homogeneous analyte, but represents a conglomerate of fibrin derivatives of different molecular sizes and structures (15), standardization of D-dimer assays is difficult (13,16,17). Currently, results of D-dimer measurements are based on assay-specific reference curves, the calibrators being selected by the respective manufacturer. Numerical results are reported as D-dimer concentration, based on calibration with purified D-dimer, or as fibrinogen-equivalent units (FEU), based on the amount of purified fibrinogen used for the preparation of a cross-linked fibrin clot, which is then degraded by plasmin and used as a calibrator. The third kind of calibrators used by some manufacturers are based on pooled plasma from patients with elevated D-dimer concentration (10). Since the different approaches to calibration lead to variable results of D-dimer concentration, a consensus was reached that a common calibrator is needed. This calibrator should reflect the heterogeneity of D-dimer antigen-containing compounds found in clinical blood samples, a goal that has not yet been achieved (18).

Another approach to comparable D-dimer values obtained with different assays is harmonization by the use of patient pooled plasma (13,17). Harmonization is based on mathematical transformation of regression lines through the assay-specific values of a set of plasma samples with different D-dimer concentration to a reference regression line through the overall mean values of all the D-dimer assays being harmonized (14,19). The advantage of this approach is that all the different kinds of fibrin degradation products will be present in the patient pooled plasma, and a limitation is that an individual patient or specific patient groups (e.g. patients with deep vein thrombosis or patients with disseminated intravascular coagulation) may behave differently. Because there is no reference assay for D-dimer available, the amount of patient pooled plasma added to normal pooled plasma is used as an independent variable. Assay-specific values used in this harmonization model reflect the response of the different assays to the kind of D-dimer in the patient pooled plasma used. If a large number of laboratories are participating in the harmonization, then the estimated assay-specific consensus values are a reliable approximation to the so-called “analytical true values” for these samples.

In the present study harmonization of test results of different D-dimer assays was performed as published (14). Compared to the harmonization procedure published (14), which lead to a reduction of the variability from about 75% to 5.5%, in our study reduction of variability was much smaller (from about 89% to about 60%) for all validation samples, but was considerably better for samples with high D-dimer concentration (V04-V15) (reduction from about 89% to 19%). For samples with D-dimer concentration around and below the cut-off (V01-V03), the coefficient of variation even increased after harmonization (from about 86% to about 224%). In the published study (14) over 500 laboratories participated using in a total of 20 different assays. Although only the seven most frequently used assays were used in the set-up of the harmonization model, the number of results was considerably greater compared to our study in which only five laboratories participated. Although the harmonization procedure performed in our study could not be adopted to report results from different laboratories, it represented an exercise on the (non)comparability of the D-dimer assays results used in our medical institution.

To conclude, the harmonization procedure adopted considerably improved comparability between different D-dimer assays in samples with high D-dimer concentration. However, for samples with normal D-dimer and D-dimer close to the cut-off value no improvement in variability was observed. This could partly be attributed to the small number of participating laboratories, but also to the small number of harmonization samples in the normal and around the cut-off ranges. Since D-dimer values around the cut-off are critical for exclusion of deep vein thrombosis or pulmonary embolism, this harmonization procedure could not be adopted to report results from different laboratories.

The authors are indebted to laboratory heads Katarina Lenart, Nada Snoj, Alenka Trampuš Bakija and Jana Kralj and technicians from these laboratories for excellent technical assistance, and to the Slovenian representative of Dade Behring, and companies Dipros and Mikro+Polo for providing reagents and analysers.

13.  Nieuwenhuizen W. A reference material for harmonisation of D-dimer assays. Fibrinogen Subcommittee of the Scientific and Standardization Committee of the International Society of Thrombosis and Haemostasis. Thromb Haemost 1997;77:1031-3.