Background: BMI is one of the measures used in clinical epidemiological studies as well as in clinical diagnosis of obesity. Obesity and BMI have been implicated as independent risk factors for CAD. On contrary, the relationship between BMI and CAD may be absent or sometimes shows the “obesity paradox”. The aim of the study presented was to determine the distribution of BMI in Croatian patients with confirmed or suspected coronary artery disease.
Materials and methods: 728 Croatian patients who underwent coronary angiography were involved in the study. The concentrations of glucose, lipid parameters, homocysteine and fibrinogen were determined with standard methods. BMI was calculated after measurement of body weight and height.
Results: There were no significant differences between three BMI-categories for CAD(+) and CAD(-) patients, neither for the patients with and without diabetes or smokers/non-smokers. In CAD(+) group, there was no relation between myocardial infarction (MI) and BMI, but there was significantly more obese patients with arterial hypertension (P = 0.005). Though statistically significant, differences in plasma cholesterol (P = 0.001), HDL-cholesterol (P < 0.001), apolipoprotein A-I (P < 0.001) and triglyceride (P = 0.002) concentrations between normal, overweight and obese patients were clinically irrelevant. No significant correlations were observed between HDL-cholesterol, Apo A-I, triglycerides and hypertension with BMI.
Conclusions: In patients with positive or suspected coronary artery disease, BMI is not associated with CAD or with other studied CAD-risk factors with the exception of hypertension.

Body mass index (BMI) has been recognized as a common risk factor for many diseases, including coronary artery disease (CAD), cancer and diabetes, according to the World Health Organization (WHO) criteria (1). The proportion of overweight and obese people increases to epidemic proportions in both industrialized and developing countries worldwide, because of imbalance between nutrition and physical activity (2). Insulin resistance, increased lipid parameters and disturbances in the sympathetic nervous system are associated with obesity (3). The association of insulin resistance, central obesity, hypertension and dyslipidemia is denoted as metabolic syndrome and presents a major risk factor for development of CAD (4,5). BMI is one of the measures often used in clinical epidemiological studies as well as in clinical diagnosis of obesity. Obesity has been implicated as an independent risk factor for CAD. However, many recent studies confute this statement and indicate the absence of controversial relationship between BMI and CAD (6). Moreover, BMI seems to be a poor diagnostic factor in obesity, because it does not discriminate between the percentage of body fat and lean mass (7). Some population studies have demonstrated the presence of “obesity paradox” (6) or indicate that obesity may be a “negative predictor” of CAD (8).
These previously reported observations encouraged us to explore the distribution of BMI in Croatian patients with confirmed or suspected CAD that underwent coronary angiography.

The study included 728 patients (498 male and 230 female) that underwent coronary angiography at Magdalena Specialized Hospital for Cardiovascular Surgery and Cardiology in Krapinske Toplice. Blood samples were collected from 2001 to 2004. The patients were diagnosed with known CAD (after myocardial infarction and/or previous coronary angiography and/or coronary intervention), or were scheduled for coronary angiography for suspected coronary disease based on clinical presentation (typical angina, positive stress test). Patients with acute coronary syndrome (unstable angina pectoris, acute myocardial infarction) were excluded from the study. Clinical data such as age, gender, weight, height, smoking status, diabetes mellitus, evidence of hypertension and myocardial infarction were collected. Body weight and height were measured in each patient and smoking status data were collected by use of a questionnaire. Previous myocardial infarction was defined on the basis of medical documentation on hospitalization for this diagnosis as defined by clinical symptoms, ECG changes (STEMI or NSTEMI) and presence of elevated biochemical markers of myocardial necrosis. Biochemical analyses were assessed at least a month after acute myocardial infarction. Arterial hypertension was defined as repeatedly observed blood pressure values of more than 140/90 mm Hg without antihypertensive therapy, or as normotensive blood pressure measurements under antihypertensive therapy. Diabetes mellitus was defined according to blood glucose values ŠWHO diagnostic criteria (9)Ć and/or presence of insulin or oral hypoglycemic therapy. All patients were scheduled for elective coronary angiography, implying that there were no clinical symptoms or signs and/or laboratory values indicative of acute infectious disease; patients with known malignancies were not included in this study. Study subjects were divided into two groups: 1) 468 CAD(+) subjects with at least 50% stenosis of any of the major coronary arteries; and 2) 260 CAD(-) subjects with less than 10% stenosis of major coronary arteries. BMI was calculated after body weight and height measurements. Patients were also divided into three groups according to BMI (in kg/m2) as follows: normal, BMI < 25 kg/m2 (BMI-1); overweight, BMI 25–29 kg/m2 (BMI-21); and obese, BMI ³ 30 kg/m2 (BMI-3). Study patients signed an informed consent to participate in the study. The study was approved by Ethics Committees of the Magdalena Specialized Hospital for Cardiovascular Surgery and Cardiology and of Zagreb University School of Medicine.

Statistical data analysis was performed by use of the STATISTICA 7 software (StatSoft, Inc., 2003,USA). CAD and BMI group frequencies were calculated by direct counting. Categorical variables were compared using Pearson’s c2-test. Continuous variables with normal distribution were expressed as  χ±SD and 95% confidence interval (95% CI). Continuous variables without normal distribution were expressed as median and interquartile range. Group comparisons of continuous variables were performed by Student's t-test or Mann-Whitney test. Multivariate analysis (MANCOVA) with age and gender as covariates was used to test the BMI category effect on blood parameters and number of vessels affected. Values of triglycerides, fibrinogen, and number of vessels were log-transformed for multivariate analysis. Correlations were performed by calculating Pearson correlation coefficient or Spearman rank correlation. The level of significance was set at 0.05.

Table 1 presents general characteristics of study subjects in two clinical subgroups (patients with and without angiographically confirmed CAD). As published previously, the well known risk factors for CAD, i.e. higher prevalence of male gender, cigarette smoking, diabetes, hypertension, as well as higher plasma concentrations of triglycerides and homocysteine, and lower HDL-cholesterol concentration, were significantly overrepresented in CAD(+) group. Frequencies of BMI categories according to baseline characteristics of study subjects are presented in Table 2. There were no significant differences in the three BMI categories either between CAD(+) and CAD(-) patients, patients with and without diabetes or according to their smoking status. In CAD(+) group, there was no correlation between myocardial infarction and BMI, but there were significantly more obese patients with arterial hypertension (P = 0.005). Concentrations of plasma parameters in CAD(+) group according to three BMI categories are shown in Table 3. Multivariate analysis with age and gender as covariates yielded significant differences in plasma cholesterol (P = 0.001), HDL-cholesterol (P < 0.001), apolipoprotein A-I (P < 0.001) and triglyceride (P = 0.002) concentrations among normal, overweight and obese patients. Although significant, these differences were clinically irrelevant, because the difference between lipid parameters concentrations was less than 5%. Correlations between BMI and different parameters are presented in Table 4. None of the parameters tested (HDL-cholesterol, Apo A-I, triglycerides and hypertension) showed correlation with BMI.
Table 1. Characteristics of study subjects according their results of coronary angiography 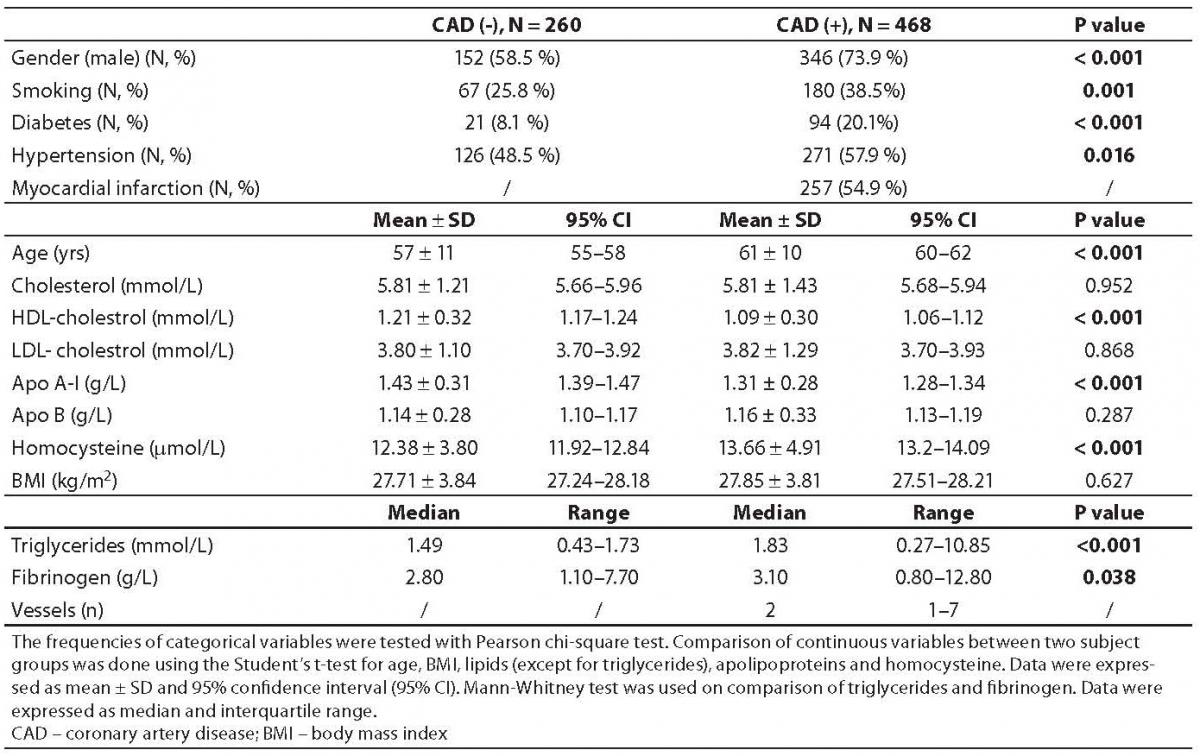 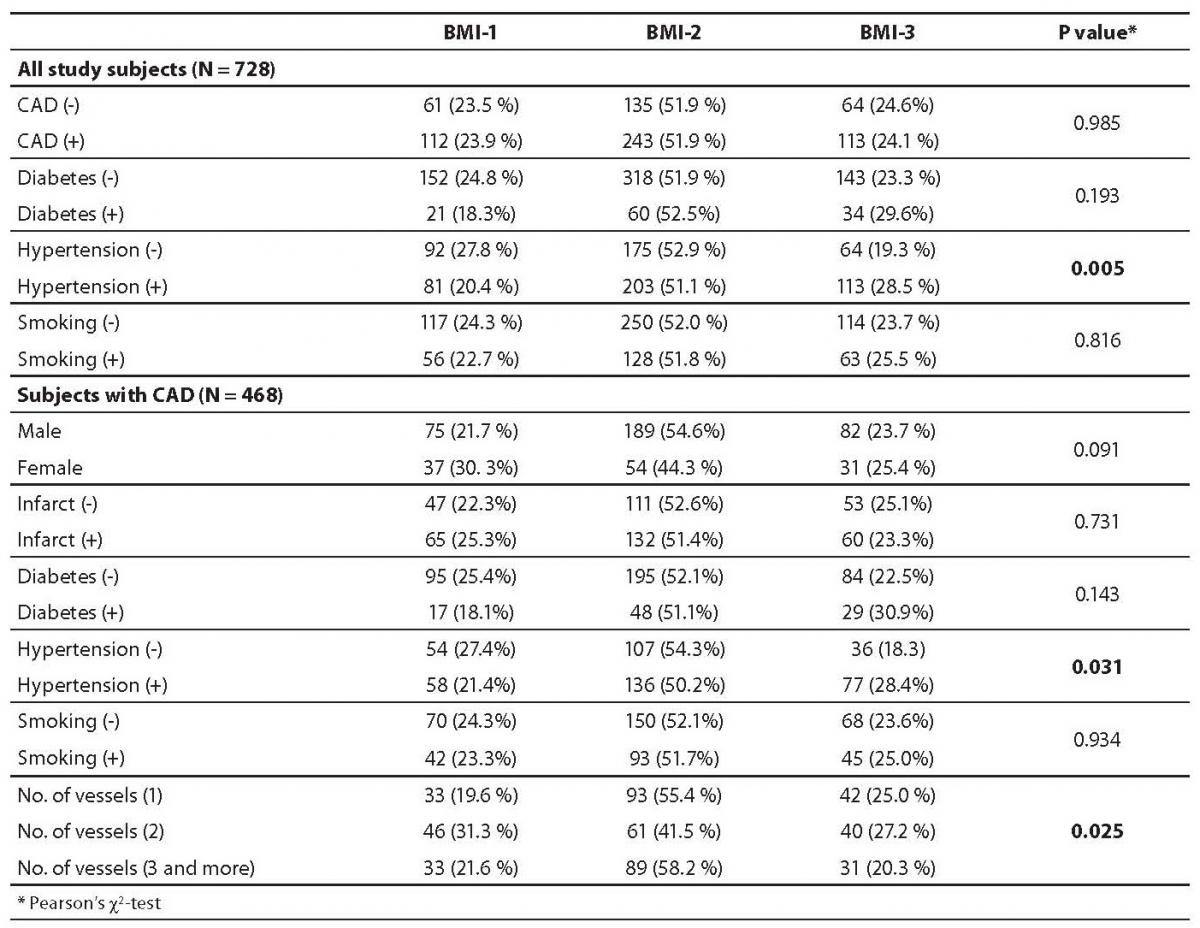 Our study showed poor diagnostic performance of BMI in the assessment of risk factors for CAD, because no relationship between CAD and BMI was demonstrated. Although BMI doesn’t seem to be an independent risk factor for CAD, it may be related to some other CAD risk factors like hypertension, diabetes and plasma concentrations of some lipid parameters. Several recent studies showed no relationship between CAD and BMI either. A study including Austrian patients that underwent coronary angiography failed to detect any positive association of CAD and BMI (10). Moreover, the same authors suggest that body fat may increase the number of coronary vessels with > 50% stenosis. In obese Italian patients, BMI correlated inversely with CAD, while CAD appeared to be associated with the waist to hip ratio, however, only in nondiabetic patients with normal body weight (11).
Many recent studies have reported unexpected and controversial results concerning relationship between BMI and CAD. Angiographically normal coronary arteries were more prevalent in the USA patients with systolic heart failure and elevated BMI (12). The existence of “obesity paradox” was recorded in patients undergoing coronary angiography in the US study group (6,13). Systematic review of different cohort studies showed patients with low BMI and CAD to have an increased long-term mortality risk when compared with patients with normal BMI, whereas total mortality risk was not increased in patients with very high BMI (14).
A prospective international INVEST study in more than 22,000 patients suffering from CAD and hypertension suggested a protective effect of obesity due to decreased risks of primary outcome and all-cause mortality (15). A study in more than 95,000 consecutive patients from New York State that underwent percutaneous coronary intervention showed lower in-hospital mortality and higher rate of adverse cardiac events in obese patients. On the contrary, patients with extreme BMI (underweight and those with BMI over 40 kg/m2) had a significant higher mortality (16). Chinese patients with carcinogenic shock after AMI had a significantly lower BMI than those that survived AMI without carcinogenic shock (17).
A study including CAD patients from numerous American hospitals explained one aspect of the obesity paradox (18). Steinberg et al. found the study group of CAD patients with higher BMI to be younger but more likely to be men and have hypertension, diabetes and hyperlipidemia. In the same study, higher BMI appeared to be associated with better use of the recommended medical therapy and invasive CAD therapeutic monitoring. This may have explained the lower rate of in-hospital mortality. A study carried out at Mayo Clinic showed overweight and obese individuals to be paradoxically protected from short-term death after AMI, but had a long-term mortality risk similar to normal weight individuals (19).
Quantitative determination of epicardial adipose tissue and pericoronary fat using by computed tomography in Dutch patients showed the amount of adipose tissue surrounding coronary arteries to be related with obesity and metabolic syndrome in patients clinically suspected of CAD (20). Pericardial fat accumulation was a stronger coronary risk factor than other factors of body fat distribution in non-obese Japanese men (21). Morricone et al. found no relationship between CAD and BMI. Interesting was their finding that CAD correlated with the amount of visceral adipose tissue in Italian patients without diabetes or impaired glucose tolerance (22). Data from the Dallas Heart Study showed the waist to hip ratio to be independently associated with prevalent atherosclerosis and provided better discrimination than either BMI or waist circumference (23). A case-control study of acute myocardial infarction that included 27,098 patients from 52 countries, representing several major ethnic groups, showed the waist to hip ratio to be highly significantly associated with the risk of myocardial infarction risk worldwide. The authors conclude that the waist to hip ratio provides better estimate of myocardial infarction attributable to obesity than BMI (24).
All these findings show the waist to hip ratio, visceral adipose tissue, epicardial adipose tissue and pericoronary fat to be more relevant obesity parameters in the evaluation of CAD risk factors than BMI. As discussed above, results of many studies point to the lack of association between BMI and cardiovascular disease. Our data also showed absence of BMI correlation with CAD as well as with diabetes, myocardial infarction, smoking status, age and gender. On the contrary, the higher prevalence of hypertension among obese patients (BMI ≥30 kg/m2) suggested that hypertension as a well known factor may be associated with BMI. Although statistical analysis of lipid parameters among normal, overweight and obese patients showed significant differences in the corrected model, dyslipidemia could not be interpreted as clinically relevant because the observed differences were less than 5%.
In conclusion, the present study showed absence of the relationship between BMI and CAD, as well as between BMI and other CAD risk factors, with the exception of hypertension. Many recent studies pointed to the existence of the “obesity paradox”. These studies suggest that scientists should be more careful in the interpretation of BMI and selection of study patients. Some other body fat indicators might be more relevant parameters in the evaluation of CAD risk factors than BMI.