Polycystic ovary syndrome (PCOS) is a metabolic and reproductive disorder affecting 5%-10% of women of reproductive age (1). It is characterized by increased ovarian and adrenal androgen secretion, hyperandrogenic symptoms (hirsutism, acne, alopecia), menstrual irregularities and insulin resistance (2), which is present in 50%-70% of PCOS patients. In addition to insulin resistance, other features of metabolic syndrome are often also present (obesity, dyslipidemia, hypertension and impaired glucose tolerance). Besides PCOS and metabolic syndrome, insulin resistance is also associated with obesity, type 2 diabetes mellitus, lipodystrophies and chronic infection. The overall prevalence of insulin resistance is reported to be 10%-25% (1). Insulin resistance is characterized by attenuated response of tissues to insulin action and can be due to impairments at any level of insulin signaling. Clinical markers of insulin resistance are visceral obesity, acanthosis nigricans, acne, hirsutism and hepatic steatosis. Hyperinsulinemic euglycemic clamp is considered to be the gold standard for evaluating insulin resistance. Because of the invasiveness of this method, other alternative measures like fasting plasma insulin concentration, homeostasis model assessment (HOMA) index, quantitative insulin sensitivity check index (QUICKI) and McAuley index have also been developed (1).
Peroxisome proliferator-activated receptors (PPARs) are nuclear receptors which control gene transcription. There are three types of PPARs: PPARα, PPARβ (also named PPARδ) and PPARγ. PPARγ has an important role as an adipocyte gene expression regulator. Specific PPARγ activation induces preadipocyte differentation into mature adipocyte in rodent and human cell lines (3). PPARγ regulates transcription of proteins involved in free fatty acid (FFA) uptake (adipocyte-specific FFA binding protein aP2, lipoprotein lipase, fatty acids transport proteins FATP and CD36, adipophilin, liver X receptor α) and lipogenesis (long chain acyl-CoA synthase, phosphoenolpyruvate carboxykinase) (4). Besides adipocyte differentiation, PPARγ is also essential for mature adipocyte survival in vitro (5).
PPARG gene is located on chrosomome 3p25. It spans over 146 kilobase pairs and consists of 9 exons. It codes 4 different mRNAs which translate to 2 different protein isoforms (PPARγ1 and PPARγ2) using different promotors and alternative splicing. The PPARγ2 isoform has 30 additional amino acids on its N-terminal end and has 5- to 6-fold increase in its ligand-dependent activating function (5). The Pro12Ala polymorphism lies in exon B and is therefore present only in PPARγ2 isoform. The His477His polymorphism lies in exon 6 and can be found in both protein isoforms (Figure 1). PPARγ containing the G allele has a lower transcriptional activity than the one containing the allele C in vitro. This was confirmed by 3 individual in vivo studies (7). 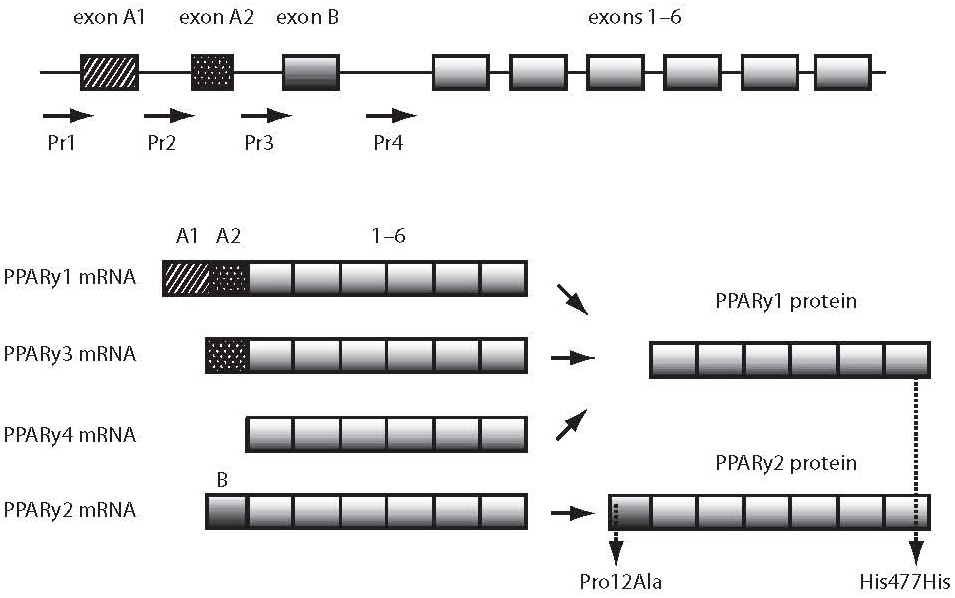 Figure 1. PPARγ gene and mRNAs. The PPARγ1 isoform is 475 amino acids long and is a result of translation of PPARγ1, PPARγ3 and PPARγ4 mRNA. The PPARγ2 isoform has 30 additional amino acids on its N-terminal end. PPARγ1 is expressed ubiquitously, whereas PPARγ2 is adipose-specific. PPARγ3 is expressed in macrophages, adipose tissue and colon. Localization of PPARγ4 expression is not yet defined. (Adapted from ref. 6)
The aim of our preliminary study was to determine the association of Pro12Ala and His477His polymorphisms in PPARG gene and their diplotypes with insulin resistance in PCOS patients. Although many studies have studied the Pro12Ala and/or His477His polymorphisms, often with opposing results, we were the first to conduct this kind of a study in a Slovene group of PCOS patients and to determine the association of diplotype with high sensitivity C-reactive protein (hsCRP) in PCOS patients.

Our study included 69 Slovene (Caucasian) women, all of them diagnosed with PCOS according to NICHD (National Institute of Child Health and Human Development) criteria. The study was approved by the Ethics Committee and all patients signed an informed consent.

Genotype frequencies for both SNPs were in Hardy-Weinberg equilibrium in our study group. Genotype and allele frequencies are shown in Table 1. Thirty-four PCOS patients had insulin resistance according to HOMA index above 2.0. A significant difference was found between Pro12Ala genotype subgroups according to body mass index (BMI) (Table 2), where carriers of the G allele had lower BMI (Pro/Pro BMI = 28.9 ± 7.2 kg/m2 vs. C/T BMI = 25.2 ± 5.2 kg/m2; P = 0.040). The Pro12Ala polymorphism was not associated with systolic or diastolic blood pressure, waist circumference, fasting glucose, glucose after OGTT, fasting insulin, HOMA index or hsCRP.
Table 1. Allele and genotype frequencies of Pro12Ala and His477His polymorphisms in polycystic ovary syndrome (PCOS) patients

In addition, haplotype analysis was performed. The Pro12Ala and His477His polymorphisms were in considerable linkage disequilibrium (D’ = 0.727) (Table 3). Out of ten theoretically possible diplotypes, only five diplotypes were found. Only one subject had the Ala-T/Pro-T diplotype and was excluded from further statistical analysis. For the rest, diplotype association was tested for clinical and biochemical markers of insulin resistance, yielding no significant association (data not presented).
Table 3. Haplotype frequencies and diplotypes

We found significant association between the G allele of the Pro12Ala polymorphism and lower BMI, and between the T allele of the His477His polymorphism and lower hsCRP but none of the two polymorphisms was associated with fasting plasma insulin and glucose concentrations and HOMA index. Diplotype analysis showed no association with anthropometric and biochemical markers of insulin resistance in PCOS.
Pro12Ala is a common polymorphism; G allele frequency is race dependent and spans from 1% to 16%. Our results in PCOS patients showed an allele frequency of 13.8% for the G allele. These frequencies are similar to those established in Danes (13), Scots (14,15), Finns (16), French (17), Indians (18), Americans (19) and Slovenes (9). A lower allele frequency (8%) was found in USA Caucasian females, and between 1% and 4% in African Americans (20), Chinese, Malayans (18), Koreans (21) and Italian females (22). A number of studies explored the influence of the G allele on tissue insulin sensitivity. Some showed the G allele to improve tissue insulin sensitivity, some failed to find any connection and, interestingly, none found a negative impact of the G allele. Results are even more inconsistent regarding diabetes. Some studies linked the G allele with a decreased risk, some with an increased risk of type 2 diabetes and some found no connection (7).
The His477His polymorphism can be found under different names: C161T, C1431T, His447His and CAC477CAT. The T allele frequency ranges from 6.5% to 25.2%, depending on race. The determined T allele frequency for His477His polymorphism in our study was 12.3% in PCOS patients. Similar allele frequencies were found in French (17,23), Americans (19) and Scots (14,15). Slightly higher allele frequencies (16%-17%) were found in Australians (24) and Indians, and even higher (19%-25%) in Chinese, Malayans (18) and Finns (16).
Statistical analysis showed a significant association between the G allele of the Pro12Ala polymorphism and BMI where the carriers of the G allele had lower BMI. Some of the published correlation studies showed no significant association of the G allele with BMI (13,21), three of them including women with PCOS (20,22,25). Others found the G allele carriers to have higher BMI (16,18,19). All of these studies were conducted on a 2- to 60-fold larger number of subjects compared to our study. A meta-analysis including data from 30 studies (~19000 subjects) showed a significant connection of the G allele in subjects with BMI over 27 kg/m2 (26). Another meta-analysis including data from 57 studies (~32000 subjects) showed the Pro12Ala to have no association with diabetes related traits but in certain subgroups (Caucasians, obese subjects) the G allele was associated with higher BMI and greater insulin sensitivity (27).
In our study, the Pro12Ala polymorphism was not associated with waist circumference and diastolic and systolic blood pressure, which is consistent with the findings of Frederiksen et al. (13) but inconsistent with Valve et al. and Wei et al. (16,19), where the G allele was connected with higher waist circumference and higher BMI as well. Like our study, none of those studies (13,16,21,22,25) found any association between the G allele and fasting glucose, fasting insulin and/or HOMA index. Hara et al. (20) found no significant association of the G allele and fasting glucose or glucose after OGTT, but carriers of the G allele had a significantly lower insulin concentration and HOMA index. Similar to our study, the G allele was not associated with fasting insulin in studies conducted by Tai et al. (18) and Wei et al. (19), but it was associated with higher and lower glucose, respectively. Studies of the Pro12Ala polymorphism in association with hsCRP in PCOS patients cannot be found in the literature.
Our statistical analysis on the His477His polymorphism showed a significant association with hsCRP; carriers of the T allele had lower hsCRP. Similar to Meirhaeghe et al. (23), we found no association of the T allele with BMI. In contrast to our findings, the T allele was associated with higher BMI in several studies (16,18,19,22). In our study, the T allele was not associated with waist circumference, which is similar to the results reported by Wei et al. (19). In the study by Valve et al. (16), it was associated with higher waist circumference (16), which is in contrast to our results. Meirhaeghe et al. (23) found no association between the T allele and systolic and diastolic blood pressure, which is consistent with our findings. Fasting glucose and insulin concentrations were not associated with the T allele in our study, which is similar to the findings reported elsewhere (16,18,19,22,23). We showed the T allele to be associated with decreased hsCRP, therefore representing a lower risk for cardiovascular disease development. Similar findings have been reported by Wang et al., where carriers of the T allele had a lower risk of developing cardiovascular disease, an association seen especially in CT heterozygotes (24).
We performed a diplotype analysis and established the degree of linkage disequilibrium D’ = 0.727, which was similar to the one reported by Doney et al. in diabetic Scots (D’ = 0.697) (14). Somewhat lower D’s were found in another study in diabetic Scots (D’ = 0.663), healthy children (D’ = 0.638) and healthy adults (D’ = 0.608) (15), Caucasian Americans (D’ = 0.65) (19), Chinese (D’ = 0.555) and Malayans (D’ = 0.572). A higher degree of linkage disequilibrium was found in Indians (D’ = 0.799) (18). Haplotype frequencies in our subjects (Table 3) were similar to those found by Doney et al. in Scots in two studies (14,15).
Our results showed that diplotype was not associated with any of the anthropometric or biochemical markers. On the contrary, Doney et al. demonstrated that Pro-T haplotype was connected with higher BMI compared to Pro-C or Ala-C haplotype in diabetic and non-diabetic Scots (14).
Considering the fact that the results of several studies are inconsistent, it is possible that the Pro12Ala and His477His polymorphisms only have a small influence on insulin resistance. In our pilot study on individual polymorphisms we showed that carriers of the G allele of the Pro12Ala polymorphism had a lower BMI and carriers of the T allele of the His477His polymorphism had a lower hsCRP, which are two risk factors for the development of insulin resistance. However, the association with the HOMA index or fasting insulin, two of insulin resistance markers, was not observed in our study. We therefore conclude that the polymorphisms investigated are not associated with insulin resistance in PCOS patients.

This study was supported by Slovenian Research Agency, Research Program No. P3-0298.