Statistical hypothesis testing and some pitfalls

Data analysis for research purposes usually aims to use the information gained from a sample of individuals in order to make inferences about the relevant population.
Statistical hypothesis testing is a widely used method of statistical inference. It is important to a reader of scientific or expert journals, as well as to a researcher, to understand the basic concepts of the testing procedure, in order to make sound decision and opinion on presented results.
This article gives an overview of basic steps in the general procedure for statistical hypothesis testing and points out some common pitfalls and misconceptions. Questions with particular regard to P value, determining significance level, proving null hypothesis and multiplicity problem were addressed.

Data analysis for research purposes usually aims to use the information gained from a sample of individuals in order to make inferences about the relevant population.
Statistical hypothesis testing is a widely used method of statistical inference. For example, if we are interested in whether there is a difference between men and women with respect to their serum cholesterol levels, or if the growth of bacteria follows some known distribution, or if our correlation coefficient is different from 0, we will use a hypothesis test. Computers and specialized statistical software, with their extensive help guides, make carrying out statistical tests rather easy. Statistical computer programs give the exact P value, and journal editors today demand that researchers quote actual P values, and let readers make their own interpretation (for example, see Instructions to Authors on Biochemia Medica web site).
On the other hand, there is more to interpretation of a test result than just stating “statistical significance” when P value is less then 0.05 or any other arbitrary cut-off value. So it is equally important for both, researchers and readers of scientific or expert journals, to understand statistical hypothesis testing procedures and how to use them when presenting or evaluating research results in the published article. There is one somewhat disregarded issue concerning statistical tests. Many published papers today quote rather a large number of P values which may be difficult to interpret (1). The purpose of this paper is to give a brief overview of basic steps in the general procedure for a statistical hypothesis testing, and to point out some common pitfalls and misconceptions.

A statistical hypothesis testing is a procedure that involves formulating a statistical hypothesis and using a sample data to decide on the validity of the formulated statistical hypothesis. Although details of the test might change from one test to another, we can use this four-step procedure to do any hypothesis testing:
1. Set up the null and alternative hypotheses.
2. Define the test procedure, including selection of significance level and power.
3. Calculate test statistics and associated P value.
4. Conclude that data are consistent or inconsistent with the null hypothesis, i.e. make a decision about null hypothesis.
Two possible errors can be made when deciding upon the null hypothesis (2).
Type I error occurs when we “see” the effect when actually there is none. The probability of making a Type I error is usually called alpha (α), and that value is determined in advance for any hypothesis test. Alpha is what we call “significance level” and its value is most commonly set at 0.05 or 0.01. When the P value, obtained in the third step of the general hypothesis test procedure is below the value of α, the result is called “statistically significant at the α level”.
Type II error occurs when we fail to see the difference when it is actually present. The probability of making the Type II error is called beta (β) and its value depends greatly upon the size of the effect we are interested in, sample size and the chosen significance level. Beta is associated with the power of the test to detect an effect of a specified size. More about power analysis in research can be found in one of the previous articles in Lessons in Biostatistics series (3).

What is the P value?

Which significance level should we choose?

It is important to emphasize that significance level is an arbitrary value we choose as a cut-off value for deciding upon the null hypothesis and that it should be determined prior to analysis. Even when we do know the exact P value, we need some guidance about reaching a decision from the observed P value.
The plausible and simple solution is to identify the consequences of wrong decisions, i.e. of making the Type I or Type II error. If seeing (wrongly) a difference when actually there is none can be harmful for the population under study (or in general), we should choose a lower significance level, thus trying to minimize the probability of making the Type I error.
Picture the following scenario: A prospective clinical trial has shown that patients under treatment A experience considerable adverse effects. Treatment A was called off and the effects of a new treatment B were investigated. The decrease in adverse effects was observed for the new treatment B comparing to the old treatment A.
The question is: what significance level should we choose to estimate the significance of the observed difference, i.e. is the new treatment really better than the old one?
We can make two wrong conclusions, and each of them with consequence regarding patients.
Wrong conclusion #1: Treatment B is better, when actually it is the same as treatment A.
Consequence #1: We adopt the new treatment exposing patients to the adverse effects of Treatment B.
Wrong conclusion #2: Both treatments are the same, when actually treatment B is better than the treatment A.
Consequence #2: We do not adopt the new treatment in practice, but continue to search for a better solution.
Now it is quite obvious that making a Type I error (seeing the difference when there is none) in this scenario brings more harm to patients and that we should try to avoid making it.
When choosing the α significance level, we must bear in mind that if we decrease the value of α, the value of β will increase, thus decreasing the power of the test (3).

Can we “prove” the null hypothesis?

It may come as a surprise, but the answer to this question is very simple: No.
Getting an insignificant result about some treatment effect does not imply that there is none. The most we can say is that we failed to find sufficient evidence for its existence. To quote the title of an article in a highly respected medical journal - British Medical Journal: “Absence of evidence is not evidence of absence” (4). In terms of the null hypothesis we should say that “we have not rejected” or “have failed to reject” the null hypothesis (5). Statistical hypothesis test does not “prove” anything. 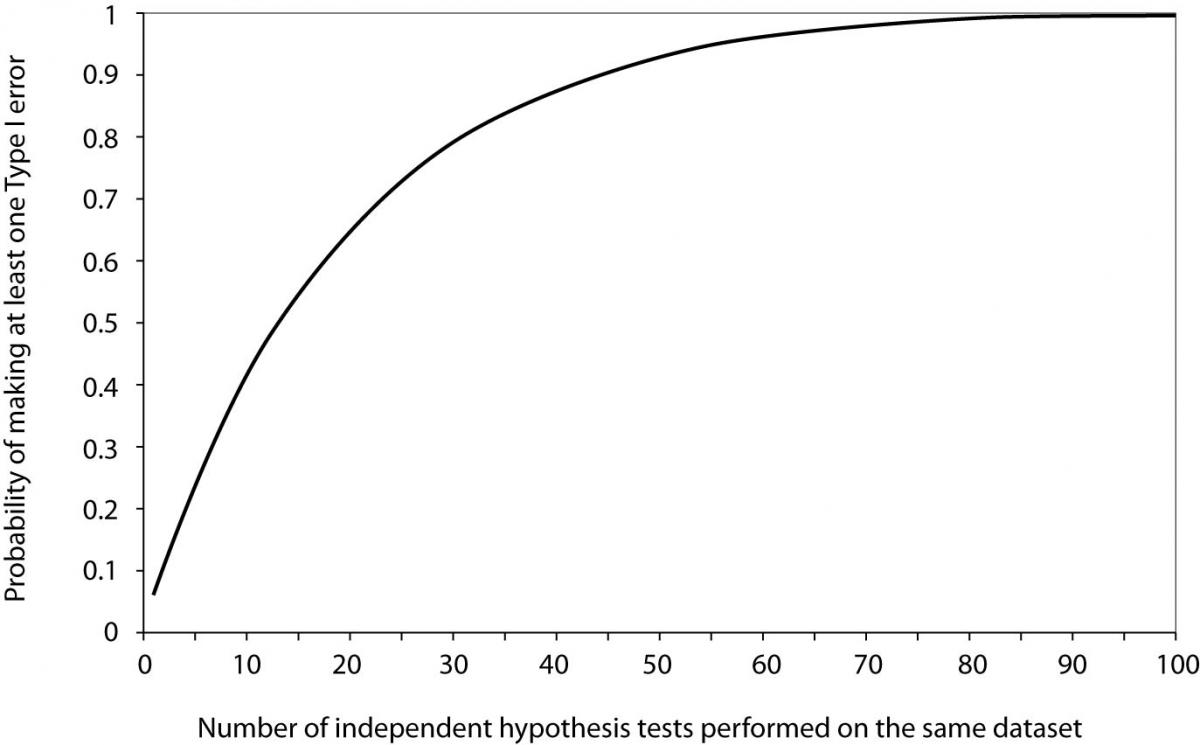 Figure 1. Probability of making at least one Type I error as a function of the number of independent hypothesis tests performed on the same dataset when all null hypotheses are true and significance level α is set to 0.05.
The results of the test comparing groups with and without back pain by means of P values were presented for each of the six subgroups plus two more for all causes in both age groups. Only one of those eight reported P values was less than 0.05 (0.02) while other ranged from 0.10 to 0.99. It was also pointed out that no association between back pain and any vascular disease was found in women, which leads to the notion that the author performed the same number of tests in the women subgroup. That would make the total of at least 16 tests among which only one was found to be “significant”, just about as many as we would expect to occur purely by chance.
The problem of multiple testing is common to microarray experiments (7). Let us consider the experiment of typing a series of random patients with a particular disease and a series of random controls without disease for a certain number of alleles. The number of tests would equal the number of alleles, testing whether each allele frequency was the same in the two populations. For 30 alleles, the probability of a false significant result when there is no association whatsoever is 0.76 while it increases to 0.92 for 50 alleles.
One way of dealing with these problems is to adjust either the minimum accepted significance level or to adjust P values obtained from the series of independent tests in order to preserve the overall significance level. If we adjust the minimum accepted significance level, we compare the “original” P values with the adjusted significance level. If we adjust P values, then we compare adjusted P values with the originally stated significance level.
A common way to adjust the original P values (sometimes called “nominal” P-values) for multiple testing is to use the Bonferroni method (1). By this method the adjustment is made by multiplying the nominal P values with the number of tests performed. So, if we made three independent tests which resulted in P values of 0.020, 0.030 and 0.040, the Bonferroni-adjusted P values would be 0.060, 0.090 and 0.120, respectively. While “original” results for all three tests would be considered significant at 0.05 level, after adjustment none of them remained significant.
Closely related to the Bonferroni method is the Šidak (Sidak) method (7). Šidak-adjusted P-values for k independent tests are calculated as:
pk = 1 – (1 – p) k.
Another problem occurs if we have multiple outcome measurements, in which case the tests will not be independent in general. Other multiple testing problems arise when we have more than two groups of study participants and wish to compare each pair of groups, or when we have a series of observations over time and wish to test each time point separately. For problems where the multiple tests are highly correlated, the aforementioned methods are not appropriate as they will be highly conservative and may miss the real effect (1).
The multiple testing problem is a serious problem in scientific research. Failure to adjust for multiplicity raises a serious doubt in obtained results because multiplicity inflates the significance level and diminishes the power of the research, and even more so if comparisons were not planned and prespecified. Thus, the multiplicity problem should not be taken lightly. Today there are numerous methods for adjusting multiplicity and an appropriate method should be implemented when facing the multiplicity problem. If we torture the data long enough they will finally produce something which is “significant”. But the significance will be unreliable, and conclusions based on those significant results are likely to be spurious.

Statistical hypothesis testing is a common method of statistical inference. There are several equally important issues not addressed in this article such as choosing the right test, performing one-tailed or two-tailed test, distinction of statistical significance and practical importance, just to name a few. It is important to a reader of scientific or expert journals as well as is to a researcher to understand the basic concepts of the testing procedure in order to make sound decisions about results and to draw accurate conclusions.
One more thing deserves attention when dealing with research results. Reporting a significant difference without reporting the size of the difference observed (i.e., the effect size) and associated confidence intervals is just half of the story. Thus, it is recommended to use both hypothesis testing and effect size estimation methods for statistical inference.