Sperm morphology assessment according to WHO and strict criteria: method comparison and intra-laboratory variability

Background: Assessment of sperm morphology is one of the most important steps in the evaluation of male partner in infertile couples. However, significant inter- and intra-laboratory variations can cause difficulties in interpretation, misdiagnoses, and consequently lead to confusion. Therefore, it is necessary to minimize these variations to eliminate consequential errors and ensure intra- and inter-laboratory reproducibility.
Materials and methods: Semen specimens were obtained from 49 consecutive male patients attending Andrology Laboratory for fertility evaluation. Two sperm morphology assessment criteria were compared: 1) semen smear prepared by Giemsa and assessed by World Health Organization (WHO) criteria; and 2) semen smear prepared by Spermac and assessed by strict criteria. Intra-laboratory comparison of morphological examination was also carried out.
Results: The diagnosis of teratozoospermia by both WHO and strict criteria was concordant in 45 of 49 cases. Intra-rater agreement between the observers was similar for WHO and strict criteria (kappa, 0.700 vs. 0.715).
Conclusions: Morphology assessment by WHO and strict criteria is concordant in diagnosing teratozoospermia and good inter-observer agreement can be achieved after proper training, mindful smear examination and complying with the classification systems.

Assessment of sperm morphology as a component of semen analysis is one of the most important steps in the evaluation of male partner in infertile couples. The World Health Organization (WHO) has so far published several manuals in order to standardize semen analysis procedures and WHO criteria have become widely accepted in sperm morphology examination at andrology laboratories all over the world (1,2). Furthermore, in 1990, Menkveld et al. showed that the assessment of sperm morphology by more stringent criteria, the so called Tygerberg or strict criteria enhances objectivity and decreases intra-laboratory variability (3). Nevertheless, due to different classification systems, a significant inter- and intra-laboratory variation also exists as a result of many factors including different smear preparation techniques, interpretation and technician experience (4). Such variations can cause difficulties in interpretation, misdiagnoses, and consequently lead to confusion. Therefore, it is necessary to minimize these variations to eliminate consequential errors and ensure intra- and inter-laboratory reproducibility.
The aim of our study was to compare two sperm morphology assessment criteria: 1) semen smear prepared by Giemsa and assessed by WHO criteria; and 2) semen smear prepared by Spermac and assessed by strict criteria. We also aimed to carry out intra-laboratory comparison of morphological examination. To the best of our knowledge, this is the first report on comparison of methods and intra-laboratory variations in Croatia.

Semen specimens were obtained from 49 consecutive male patients between 18 and 50 years of age. The patients attended Andrology Laboratory, University Department of Obstetrics and Gynecology, Zagreb University Hospital Center, for fertility evaluation in the period from May to July 2007. All subjects were asked for a minimum of 2 days of sexual abstinence.

According to WHO criteria (1), normozoospermia is defined as an ejaculate with sperm concentration of > 20 x 106spermatozoa/mL, progressive sperm motility of > 50%, or at least 25% of spermatozoa with linear progressive motility and ≥ 30% of morphologically normal spermatozoa. However, these criteria can only be applied when sperm analysis is carried out at 37 °C. Sperm motility is highly influenced by temperature and should always be assessed under controlled thermal conditions (5). Since, the motility analysis at Andrology Laboratory was performed at room temperature (22 °C), we had to readjust the sperm motility criteria. According to these readjusted criteria, asthenozoospermia is present when < 40% of spermatozoa with progressive motility is found in the semen sample (5). Teratozoospermia is diagnosed when < 30% of morphologically normal spermatozoa are found in semen samples according to the WHO criteria or < 15% according to the strict criteria. Oligozoospermia defines an ejaculate with sperm concentration of < 20 x 106 spermatozoa/mL. Finally, oligoasthenozoospermia is defined as an ejaculate with reduced sperm concentration and motility.

Assessment of sperm motility and concentration

The evaluation of sperm motility and concentration was performed by using the Autosperm, Amsaten Corp. (De Pinte, Belgium) system for ejaculate analysis. After liquefaction, 10 μL of semen was pipetted onto a glass slide and covered with a cover slip (size 22 x 22 mm). The analysis was performed at room temperature at final magnification of 500x. The motility was expressed as the percentage of motile spermatozoa:
a) spermatozoa with linear and progressive motility (linear velocity ≥ 22 μm/s);
b) spermatozoa with slow linear or nonlinear motility (linear velocity < 22 μm/s and velocity ≥ 5 μm/s);
c) sluggish; and
d) immotile spermatozoa.

Sperm morphology assessment by WHO criteria

Following liquefaction, 10 µL of semen was spread onto a glass slide and allowed to air-dry at room temperature. The smears were then stained with Giemsa stain and sperm morphology was assessed according to WHO criteria (1). Two different examiners counted 200 cells per smear using brightfield illumination at final magnification of 1000x and oil immersion. According to WHO criteria, a morphologically normal spermatozoon has an oval head and an acrosome covering 40%–70% of the head area. A normal spermatozoon has no neck, midpiece, tail abnormalities nor cytoplasmic droplets larger than 50% of the sperm head.

Leukocytes and immature germ cells (round spermatids, spermatocytes and spermatogonia) were assessed by staining the slides with Giemsa stain and quantified by using the Autosperm, Amsaten Corp. (De Pinte, Belgium) system for ejaculate analysis.

After liquefaction and prior to staining, an aliquot of semen was washed with Quinn’s Sperm Washing Medium, SAGE (USA) and centrifuged at 300 g for 10 minutes. The supernatant was removed and 0.5 mL of Quinn’s medium was added to the remaining pellet. Ten µL of washed semen was then spread onto a glass slide, fixed and air-dried. The smears were washed with distilled water and stained with Spermac stain, FertiPro (Beernem, Belgium). After staining, the smears were washed with distilled water. Two different examiners counted 200 cells per smear using brightfield illumination at final magnification of 1000x and oil immersion. Strict criteria (3) were applied for the evaluation, according to which a spermatozoon is normal if it has an oval head, 4.0–5.0 µm long and 2.5–3.5 µm wide, measured with an ocular micrometer. The length-to-width ratio should be 1.50–1.75. A normal spermatozoon has a well-defined acrosome that covers 40%–70% of the head. The midpiece is thin, less than 1 µm wide, about 1.5 times longer than the head. Cytoplasmic droplets, if present, should not be larger than half of the head width. The tail is thin, uniform, uncoiled and about 45 µm long. According to this classification system, all borderline forms are considered as abnormal (3).

The vitality was analyzed by staining the smears with eosin (1). Vital sperms have intact cell membrane, are not stained and remain white in the smear, whereas eosin diffuses through the disrupted cell membrane of the sperms which are not vital. The smears were air-dried and the evaluation was performed by counting the red-stained and unstained spermatozoa with brightfield optics at final magnification of 400x. At least 100 cells were counted. Results are presented as proportion (%) of eosin negative (unstained) sperms.

The results were described with arithmetic mean and standard deviation. All semen samples were assessed by one observer. Differences between semen parameters assessed by WHO and strict criteria were tested by t-test. Differences in semen parameters among various subgroups (normozoospermia, asthenozoospermia, oligozoospermia and oligoasthenozoospermia) were assessed by one-way ANOVA. Inter-observer agreement was examined on the evaluation of the sperm morphology by both WHO and strict criteria. Kappa value was calculated as a measure of inter-observer agreement. The results were analyzed with the SPSS program, SPSS Inc. (Chicago, USA).

Semen parameters, together with patient age and sexual abstinence are presented in Table 1. The patients were distributed into 4 groups as follows: normozoospermia, asthenozoospermia, oligozoospermia and oligoasthenozoospermia. No statistically significant difference was found in the age or sexual abstinence among the four groups. However, there was a considerable inter-group difference in sperm concentration, total sperm count, motility and vitality (P < 0.001 for each parameter). Also, the semen volume and the number of immature germ cells differed significantly between the groups (P = 0.029 and 0.024, respectively).
Table 1. Patient and semen parameters 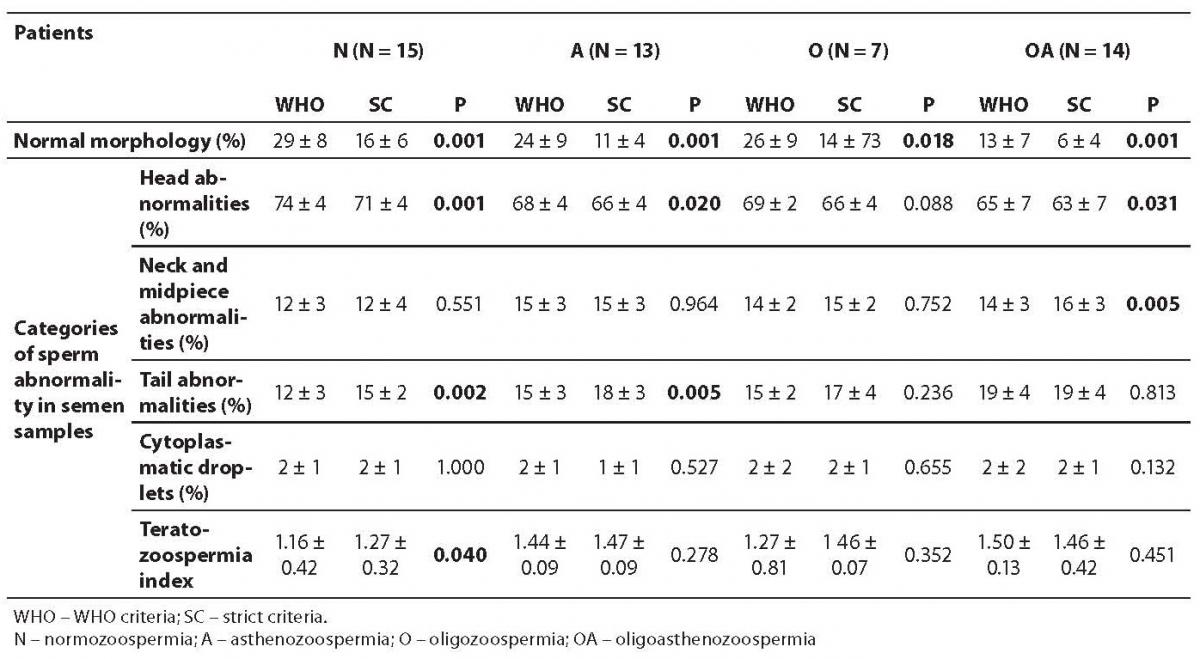 The key finding of our study was that comparison of sperm morphology assessment by WHO and strict criteria showed maximal concordance in diagnosing teratozoospermia. Also, a good inter-observer agreement for both criteria was found in the intra-laboratory comparison of morphology assessment.
Many authors have studied the impact of different preparation techniques and assessment criteria on the objectivity of morphology assessment and intra-laboratory variability. However, due to different study designs it is quite uneasy to compare results so far published in the literature. In 1993, Meschede et al. studied the influence of three different preparation techniques, i.e. Papanicolaou, Shorr stain and ‘wet preparations’ protocol, on the results of sperm morphology assessment (6). This study showed very poor correlation among the techniques; therefore the authors recommended that only one method be used in a particular laboratory in order to ensure laboratory comparability. However, other researches (7,8) found good correlation between staining methods used in their study. The inconsistency in observed in the reported results might be due to the significant improvements made in sperm morphology assessment standardization as well as improvements in quality control of semen analysis in the last 15 years. The results of our study are in close agreement with latest reports, proving that acceptable agreement can be accomplished when classification systems are adjusted to the staining techniques.
Giemsa staining, routinely used in our laboratory, yielded a higher mean percentage of head abnormalities in the normozoospermia, asthenozoospermia and oligoasthenozoospermia groups when morphology was assessed by WHO criteria compared to strict criteria. This might be due to the background staining of unwashed samples and similar staining of different sperm parts. On the other hand, when samples were stained by Spermac, various sperm parts were stained with different colors, resulting in better visual perception of all sperm abnormalities.
Moreover, TZI may also be significantly influenced by the preparation method (6). On the contrary, TZI was not influenced by the preparation method in our study. As already stated, comparison of sperm morphology assessment by both criteria was most consistent in diagnosing teratozoospermia, whereas the major inconsistency in observing TZI was found in the normozoospermia group.
As of our results, the intra-laboratory comparison revealed a good level of agreement between the two observers in our laboratory. However, in one study on 54 semen samples from eight fertile men and 46 subfertile patients using liquefied and washed samples stained with Diff-Quik and Papanicolaou stains, a very high degree of agreement (inter-observer variability for liquefied and washed samples of 0.82 and 0.93, respectively) was observed between the two observers (9). Of those two examiners, one was a trained scientist with more than 5-year experience, while the other one was a scientist with less than 2-year experience. Practical experience and compliance with the recommended methodologies are crucial in diagnosing teratozoospermia and can have a huge impact on the results of the sperm morphology assessment (10). One of our observers was newly introduced to the sperm morphology assessment. This could be the reason for a somewhat lesser degree of inter-rater agreement. Even so, this provides a good example of how, after proper training, mindful smear examination and complying with the classification systems, results similar to those obtained by an experienced observer could be achieved. Many authors (3,4,10,13) carried out intra-/inter-observer and/or intra-/inter-laboratory comparisons. Unfortunately, it is quite difficult to compare their results, due to some major differences in study design and measures of variability.
Based on our results herein we conclude that morphology assessment by WHO and strict criteria is concordant in diagnosing teratozoospermia regardless of the criteria used and that a good inter-observer agreement can be achieved when all necessary precautions of good laboratory practice are taken into consideration prior to morphology evaluation.
Sperm morphology is recognized as a semen parameter that mostly correlates with the in vivo (11) and in vitro fertilizing ability (12). Nevertheless, there is an ongoing debate regarding the reliability of the results of semen analysis (13). It points to the need of standardization and continuous quality monitoring. Hopefully, this study will encourage other Croatian andrology laboratories to investigate their inter-rater agreement. This could be a good initiative for standardization of sperm morphology assessment at the national level.

This work was supported by the Ministry of Science, Education and Sports, Republic of Croatia, project number 108-1080399-0384.