Background: There is little information on the influence of regular physical exercise on baseline prolactin levels in male athletes, especially in professional soccer players. Therefore, the aim of this article was to compare serum prolactin levels in professional sportsmen with those of a control population of healthy, sedentary, male blood donors.
Patients and methods: Serum prolactin was measured in 31 members of a professional soccer team playing in the Italian major league (“Serie A”), and in a control population of 195 healthy, sedentary, male blood donors. Athletes had rested 24 hrs since the previous training session. All samples were collected in the morning after an overnight fast and a minimum of 30 min rest before venipuncture.
Results: No significant differences could be observed in the morning concentration of serum prolactin between athletes and sedentary controls (12.9 ± 1.0 vs. 11.8 ± 0.8 ng/mL; P = 0.471). The percentage of athletes displaying values outside the age- and sex-specific reference range did not differ significantly from that of the control population (< 3.4 ng/mL: 0 vs. 1%, P = 0.642; > 16.2 ng/mL: 29 vs. 23%, P = 0.154).
Conclusions: Results of our investigation show that the baseline (morning) concentration of serum prolactin might not vary significantly in response to regular physical exercise. Therefore, the reference range for the general population of young male adults might also be used for professional soccer players and, probably, other sportsmen with a similar physical workload.

Prolactin or luteotropic hormone (LTH) is a pleiotropic neuroendocrine hormone produced by the anterior pituitary gland (1). In humans, prolactin is primarily associated with lactation, though it exerts several other biological functions, including regulating orgasms and stimulating proliferation of oligodendrocyte precursor cells which further differentiate into oligodendrocytes, the cells responsible for the formation of myelin sheath on axons in the central nervous system (1). Some evidence also supports the hypothesis that prolactin might be involved in maintenance of immune competence, since prolactin receptors have been identified on human lymphocytes (1).
Recently, major emphasis has been placed on the measurement of this hormone in sportsmen, because its value would reflect compliance and tolerance to physical exercise. It has also been hypothesized that prolactin measurement may be used to identify the most suitable athlete for a given sport and mainly to survey exercise as rewarding behaviour in trained people (2). There are, however, little data on the influence of chronic physical exercise on baseline prolactin levels in male athletes and, especially, there is no information on the reference values of this hormone in professional soccer players, to the best of our knowledge. Therefore, the aim of this article was to compare serum prolactin levels in professional sportsmen with those of a control population of healthy, sedentary, male blood donors.

Serum prolactin was measured in 31 members of a professional soccer team (age: 27 ± 1 years) playing in the Italian major league (“Serie A”). Athletes came to our laboratory for a planned laboratory testing at the beginning of the season (14 July 2008). The control population consisted on 195 healthy, sedentary, male blood donors (age 27±1 years, P = 0.155), referred to our laboratory for a regular blood donation. Athletes had rested 24 hrs since the previous training session. Samples were collected in the morning (between 8.00 and 9.00 AM) after an overnight fast and a minimum of 30 min rest before venipuncture (2), in vacuum tubes containing no additives (Becton-Dickinson, Oxford, UK). After centrifugation at 1,500 g for 10 min at room temperature, serum was separated and immediately analyzed. Prolactin was measured by a commercially available automated chemiluminescent immunoassay on the Immulite 2000 (Diagnostic Products Corporation, Los Angeles, USA). Mean intra- and inter-assay coefficients of variation for this assay are < 3.4% (3) and the reference range for young males is 3.4-16.2 ng/mL (4). Results of measurements were compared using the Wilcoxon-Mann-Whitney test (for continuous variables) or the chi-square test (for categorical variables) and data are presented as mean ± standard deviation (SD). Statistical analysis was performed with the statistical package SPSS version 12.0 (SPSS, Chicago, IL) and the level of statistical significance was set at P < 0.05. 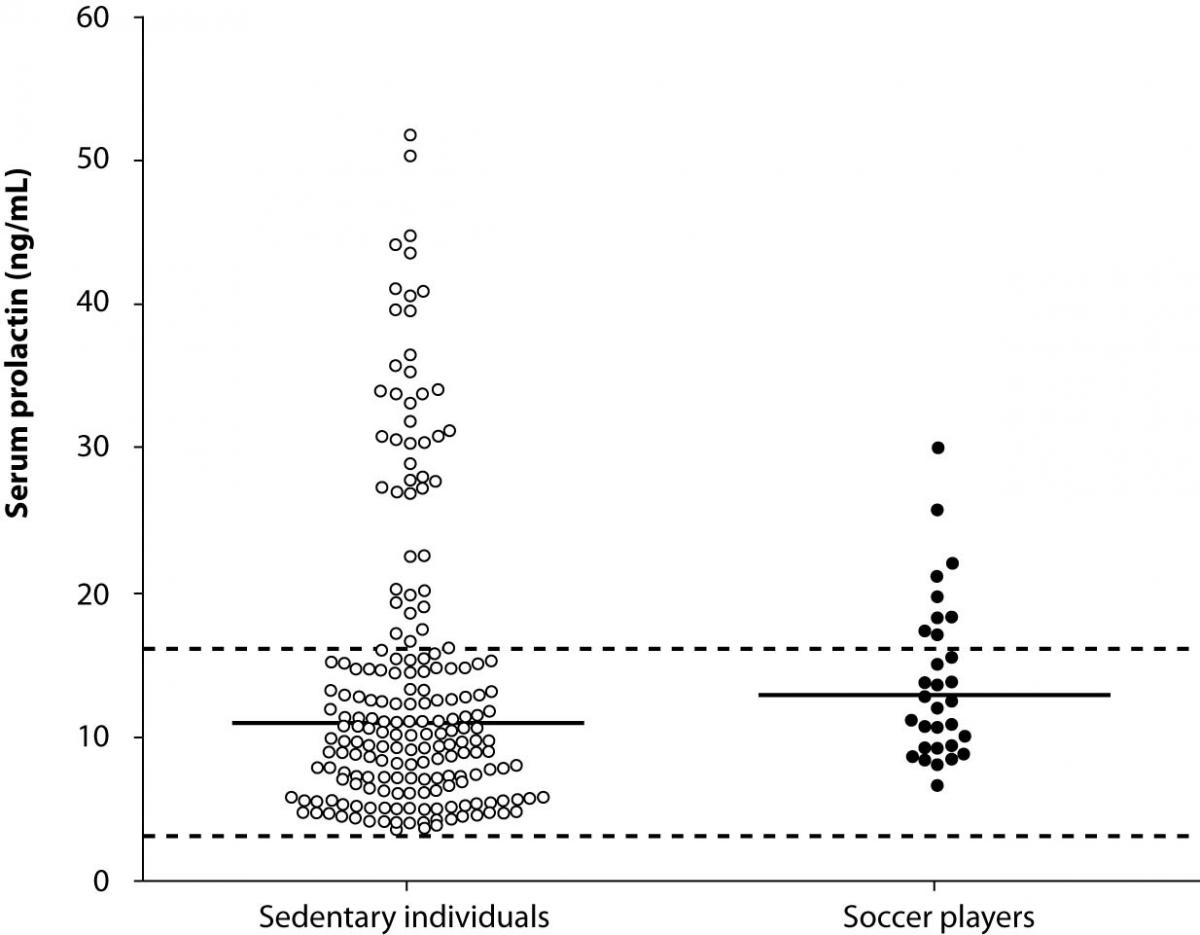 Broad comprehension of preanalytical sources of variation in laboratory testing is important for the reliable interpretation of test results. This aspect becomes critical in specific circumstances, as for the evaluation of hormones in physically active individuals, when a variety of exercise-induced metabolic adaptations might translate in significant variations of the hormonal profile (5). Although it is conventionally acknowledged that physical activity exerts a broad range of effects on male reproductive function, depending upon the intensity and duration of the activity and the fitness of the individual, controversial data have been published on the effect of regular physical exercise on baseline prolactin levels in male athletes. When studying male pro-cyclists during continuous intense competition (the 1998 “Vuelta a España”), Fernández-Garcia et al. found no differences in prolactin concentration between two different teams and throughout the study, except for a significant increase between two weeks and the end of the race (6). Di Luigi et al. also observed a significant increase of prolactin following a thirty-minute treadmill exercise (7). Overall, such variations have been mainly attributed to acute exposure to hyperoxia during exercise (8). Conversely, prolactin was found to be increased only at half-time in soccer players, whereas its concentration at the end of the match did not differ from that measured before the start (9). Fournier et al. also observed no significant modification of prolactin in runners after an ultra-marathon race of 110 km (10). Besides the acute effects of physical exercise, little data is available on the chronic influence of regular exercise on baseline prolactin levels, and no information is available in this regard for professional soccer players. Although it has been hypothesized that regular physical training might lead to adaptive changes in prolactin, hormonal response to absolute workloads was found to be inversely associated to the degree of training, i.e. at a workload where prolactin response was already maximal in untrained subjects, no response could be registered in highly trained subjects (10). Wheeler et al. also reported that the mean levels of prolactin were significantly lower in endurance runners than in controls, although levels remained within the physiological range (12).
Reliable evidence suggests that the long term, physiological suppression of the hypothalamic-pituitary-gonadal axis in sportsmen is probably of minor clinical significance (11-14). Results of our investigation are consistent with the hypothesis that the baseline (morning) concentration of serum prolactin in professional soccer players assessed at the beginning of the competitive season might not vary significantly in response to chronic physical exercise, nor it differs from that of a population of healthy sedentary individuals. This finding has some important practical implications in the field of sports medicine. First, we provided evidence that the traditional reference range for the general population of young male adults might also be used in professional soccer players and, probably, in other sportsmen with a similar physical workload. Accordingly, the measurement of morning prolactin concentration might be used to assess compliance and tolerance to physical exercise throughout the competitive season, so that the hormonal response to absolute workloads can be monitored, and eventual variations attributable to overtraining and/or overreaching reliably detected (15). Due to the small study population, the findings of this study need to be confirmed on a larger number of professional athletes.