Introduction: Procalcitonin (PCT) has been proposed as a marker of infection in critically ill patients. The aim of the study was to evaluate and compare the possible discriminative use of PCT together with other standard inflammatory parameters, such as C-reactive protein (CRP), platelets (PLT), white blood cell count (WBC) and immature granulocytes (IG) in differentiating systemic and localized bacterial infection in critically ill patients.
Materials and methods: According to clinical sings and microbiologic findings, 25 patients were divided into two groups: group A – patients with systemic bacterial infection and group B – patients with localized bacterial infection. Concentration of PCT and CRP; PLT, WBC and IG count were determined in all patients.
Results: The median concentration of PCT was 1.3 (range: 0.1–7.4) μg/L in group A and 0.2 (range: 0.1–9.1) μg/L in group B with differences between groups being statistically significant (P = 0.038). A significantly higher median PLT count (P = 0.012) was found in group B (327, range: 91–647 x 109/L) as compared to group A (140, range: 40–325 x 109/L). In contrast, there were no statistically significant differences in median values of CRP, WBC and IG between groups (P = 0.071; 0.189 and 0.239, respectively). According to ROC (receiver operating characteristic) analysis, the obtained cut-off value for PCT as the marker of systemic bacterial infection was 0.3 μg/L (sensitivity 91%, specificity 64%).
Conclusion: According to our results, PCT concentrations and PLT counts showed better discrimination than other investigated standard inflammatory parameters for differentiating systemic from localized bacterial infection in critically ill patients.

Procalcitonin (PCT), the precursor of the hormone calcitonin, is a 116 aminoacid glycoprotein with a molecular weight of 14.5 kD (1). Under normal metabolic conditions, PCT is only present in the C cells of the thyroid gland, whereas in bacterial infections its concentration raises in blood. In healthy subjects, PCT concentration is < 0.1 μg/L and rises to levels above 100 μg/L during severe bacterial, parasitic or fungal infections with systemic manifestations, even in the absence of a thyroid gland. This indicates that PCT is mainly produced extrathyroidally in systemic inflammatory conditions (2). PCT determination was first performed in 1993 by Assicot et al. in children to differentiate bacterial from viral meningitis (3). Since that date, PCT has become a marker of bacterial infection with a wide range of indications for its use (4).
Systemic bacterial infection (sepsis) can be difficult to distinguish from localized infection and noninfectious conditions in critically ill patients, such as systemic inflammatory response syndrome (SIRS). Although infections and sepsis are accompanied by clinical and laboratory signs, such as changes in body temperature, leucocytosis, C-reactive protein (CRP) and tachycardia, they often provide low discrimination in the diagnosis of infection. In such cases early diagnosis of sepsis and a prompt antibacterial therapy are very important. Usually before the initiation of adequate therapy, blood culture analysis is performed in patients who are doubtful to have these conditions. Although blood cultures are very specific for the detection of sepsis, the overall sensitivity is only 25–42% (5). Furthermore, clinical signs of sepsis may develop without bacteriological evidence of infection and negative results do not exclude the presence of infection or sepsis (2). Thus, early diagnosis of sepsis and bacterial infection still depend on a sum of clinical criteria and microbiological procedures, which do not allow any conclusions on the extent, activity and prognosis of the disease.
As PCT is an established marker of severe systemic bacterial infection. The aim of this study was to evaluate the possible discriminative use of PCT in differentiating systemic and localized bacterial infection in critically ill patients. The main goals were to compare serum concentrations of PCT, together with other standard inflammatory parameters like CRP, platelet (PLT), white blood cell (WBC) and immature granulocyte (IG) counts, in patients with systemic and localized bacterial infection.

In our investigation we have included a group of patients hospitalized for > 1 week to the Intensive Care Unit (ICU) or to the Department of Burn Injuries of the University Hospital of Traumatology Zagreb, from July to November 2007 who fulfilled following inclusion criteria: clinical signs of sepsis (6) or localised infection. Patients were divided into two subgroups, according to the clinical signs and blood culture findings: patients with clinical sings of systemic bacterial infection and positive blood cultures comprised the group A (N = 11), while patients with localized bacterial infection and negative blood cultures but positive other cultures (urine culture, tracheal aspirate, upper respiratory tract swab), comprised the group B (N = 14). This study was approved by the Ethics Board of the University Hospital of Traumatology Zagreb.

Blood sampling for biochemical parameters and blood cultures was done on the day of onset of clinical sings of infection in all patients. In addition, in patients with negative blood cultures, samples for urine culture or tracheal aspirate or upper respiratory tract swab were taken according to clinical symptoms.
The biochemical laboratory analysis included the determination of PCT, CRP, PLT, WBC and IG count. Samples for PCT and CRP were centrifuged at 3000 x g for 10 minutes and serum aliquoted and stored at -20 °C until the analysis were done. PCT concentrations were determined in serum samples using enzyme-linked fluorescent immunoassay on the miniVidas analyzer (Biomerieux, Marcy I’Etoile, France), whereas CRP was measured in serum by immunoturbidimetric method on the Dimension Xpand (Siemens, Newark, DE, USA). PLT and WBC counts were determined in whole blood samples with K3EDTA as an anticoagulant on the automated hematology analyzer Sysmex XT-1800i (Sysmex Corporation, Kobe, Japan). Differential white cell count was performed manually in stained blood peripheral smears.

The Kolmogorov-Smirnov test was used to assess types of distributions of investigated parameters. Values were expressed as median and ranges. The Mann-Whitney U test was used for between-group differences testing. The Z-test was used for determination of the significance of difference between two proportions. The receiver operating characteristic (ROC) analysis was used to determine optimal cut-off values, area under ROC curve (AUC), with respective 95% confidence intervals (95% CI), specificity and sensitivity values. The values of P < 0.05 were considered statistically significant. Statistical analysis was done using MedCalc statistical software (MedCalc 10.3.0.0., Frank Schoonjans, Maraikerke, Belgium). 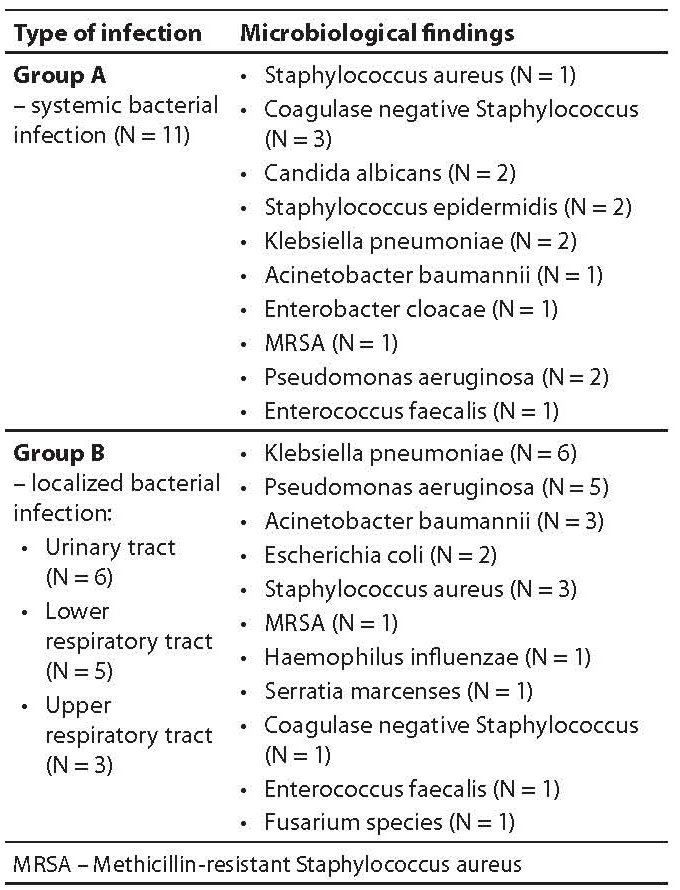 The obtained results of PCT, CRP, PLT, WBC and IG values are presented in Table 2. A statistically significant higher median value of PCT and a lower median PLT count was identified in group A as compared to group B (P = 0.038; P = 0.012, respectively). Although higher median values of CRP and IG and lower WBC were observed in group A than in group B, the differences between groups were not statistically significant (P = 0.071; 0.239 and 0.189, respectively).
Table 2. Measured parameters in all patient groups. 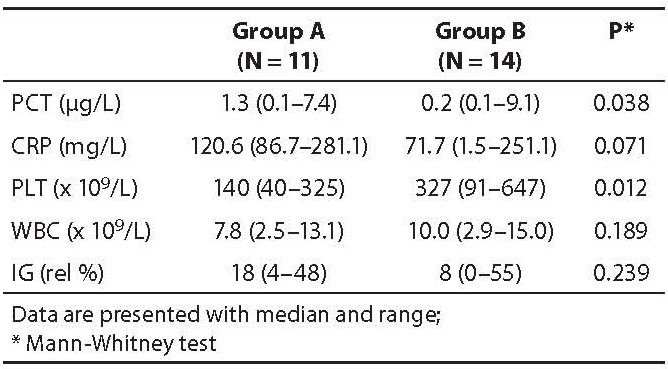 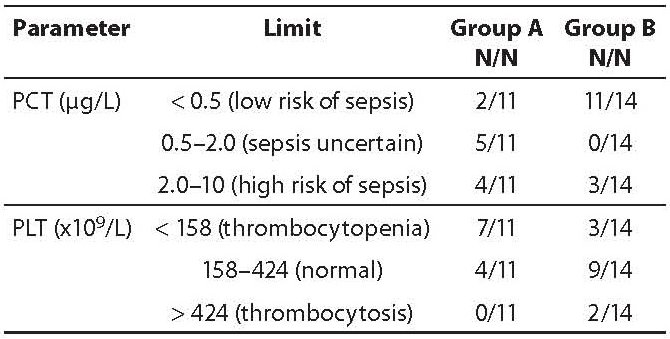 The authors would like to thank Mrs. Desiree Coen Herak for critical reading of manuscript and useful suggestions.