Concentration of C-reactive protein, magnesium and calcium in children with acute bronchoconstriction before and after therapy with salbutamol

[2] Department of Medical Biochemistry and Hematology, Faculty of Pharmacy and Biochemistry, University of Zagreb, Zagreb, Croatia

Bronchoconstriction is the constriction of the airways due to the tightening of surrounding smooth muscle, and clinical consequences of such state are coughing, wheezing, and shortness of breath (1). It can be caused by different clinical conditions, i.e. chronic obstructive lung diseases (asthma, chronic obstructive pulmonary disease – COPD, bronchiectasis), viral infections, interstitial lung disease, extrathoracic lesions (pharinx, larynx, and upper trachea) and intrathoracic lesions (lower trachea). In childhood, bronchoobstruction is mostly caused by respiratory viral infections and asthma. In sensitive individuals, the inflammation is usually induced by causal allergens leading to the symptoms of asthma (bronchoconstriction, cough, chest tightness). Additionally, respiratory infections, especially respiratory viral infections (including rhinoviruses, influenza, parainfluence, respiratory syncytial viruses, coronaviruses, adenovirus) can trigger asthmatic symptoms, such as wheezing and chest tightness (2).
Determination of serum eosinophil cationic protein (3), and recently, determination of serum CRP (using high sensitive method) can be used to monitor inflammation in patients with asthma (4). However, importance of CRP, as a marker of chronic, latent inflammation is not enough tested.
Both, investigations in vitro (5) and in vivo (6) demonstrated that magnesium acts on bronchial smooth muscle relaxation. It is known that many metabolic functions of magnesium and calcium are tightly inter-related. As intracellular cation, magnesium acts as a calcium channel blocker (7). This is consistent with the fact that magnesium also acts as a calcium antagonist. Calcium is known to act as a bronchoconstrictor. Additionally, magnesium is also involved in the processes of inflammation (8) and oxidative stress (9). Hypomagnesaemia may result in reduced pulmonary function, especially in patients with asthma (10). In previous investigations we have point out at the significant redistribution of magnesium between plasma and leukocytes during acute asthma in children (11). Patients with acute asthma (12) and even those with chronic asthma (13) have increased concentration of CRP.
The aim of this study was to find out possible changes in serum concentration of magnesium and calcium (as participants in bronchoconstriction), and concentration of CRP (as a marker of inflammation) in children with moderate and severe bronchoconstriction, caused by viral respiratory infections. CRP, magnesium and calcium concentrations were determined on hospital admission and at discharge from the hospital, i.e. before and after administration of salbutamol (short-acting β2-adrenergic receptor agonist, bronchoconstriction reliever).

Figure 1. Subgroups of children with bronchoconstriction.
Previously, in 13 children moderate permanent asthma was diagnosed according to the criteria recommended by the PRACTALL (14) and GINA 2006 (1). During respiratory syncytial virus infection (confirmed in nasopharyngeal wash specimens), moderate bronchoconstriction was confirmed in 10 children, and severe bronchoconstriction in 9 children (Figure 1). Allergic disease was not evidenced in other 13 children.
Salbutamol solution (150–200 μg in a single dose) with an ECONOneb nebulizer System (Medix Limited; Lutterworth, UK) was administered at different time intervals, according to the severity of bronchoconstriction. Diagnostic work-up and therapy were performed according to the standardized procedure, in line with ethical principles, Helsinki Declaration on Human Rights from 1975 and Seoul amendments from 2008. Study approval was obtained from the Hospital Ethics Committee. An informed consent in writing was obtained from the parents. Blood sampling was done on admission (Day 1) and the third day of salbutamol administration (Day 3).

The variables were described as mean and standard deviation (x¯ ± SD) if they had normal distribution, or median and interquartile range (IQR) if not. Normality was tested using D’Agostino-Pearson test. Student’s t-test (for normal distribution) and Mann-Whitney test (for asymmetric distribution) were used for comparison of independent samples, while variance ratio, F-test was used for comparison of dependent variables (16). Values of P < 0.05 were considered statistically significant. Correlation of the study variables was expressed by coefficient of correlation and Spearman’s coefficient of rank correlation, respectively (r). Data processing was performed using MedCalc software (Medisoftware, Mariakerke, Belgium).

Inhalation of salbutamol led to a relief of dyspnea within 24 to 36 hours. Also, signs and symptoms of viral infection have gradually relieved.
During the follow-up period, concentration of magnesium was statistically significantly higher than in control group of children (Table 1). Statistical differences between magnesium concentration between 1st and 3rd day were not significant, neither in children with moderate nor severe bronchoconstriction. There was no statistically significant difference in plasma calcium concentrations between investigated groups of children. Magnesium to calcium ratio was significantly higher on 3rd day of therapy in comparison with the group of healthy children (P = 0.04).
Table 1. Values of magnesium, calcium, magnesium to calcium ratio and CRP, in 32 children with bronchoconstriction before (day 1) and after therapy with salbutamol. 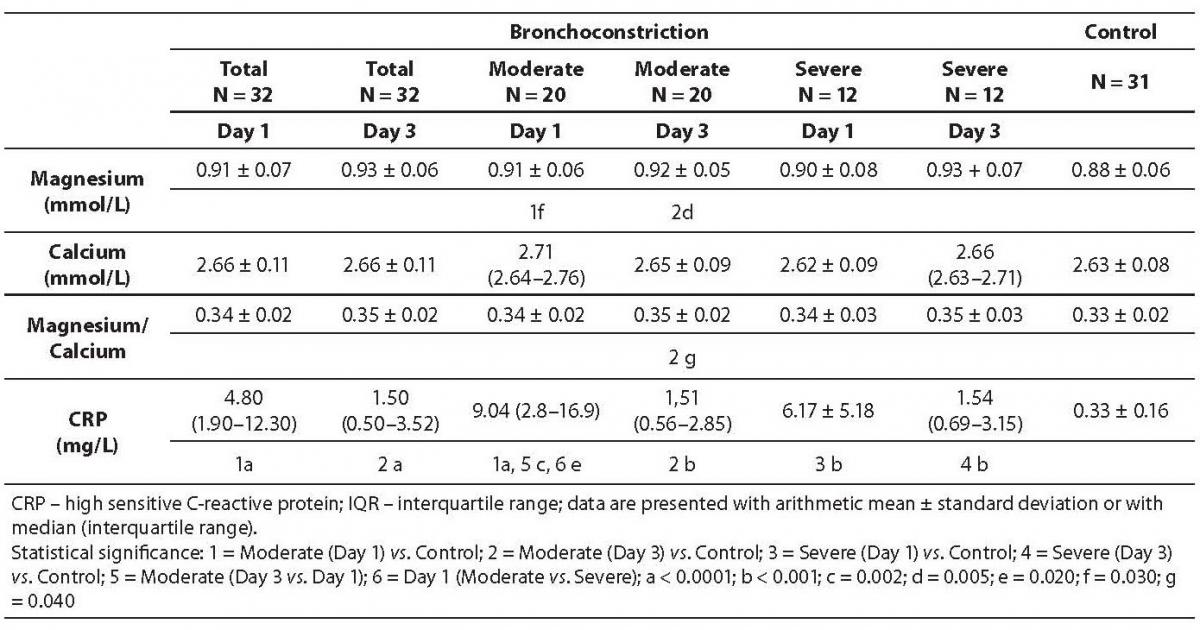 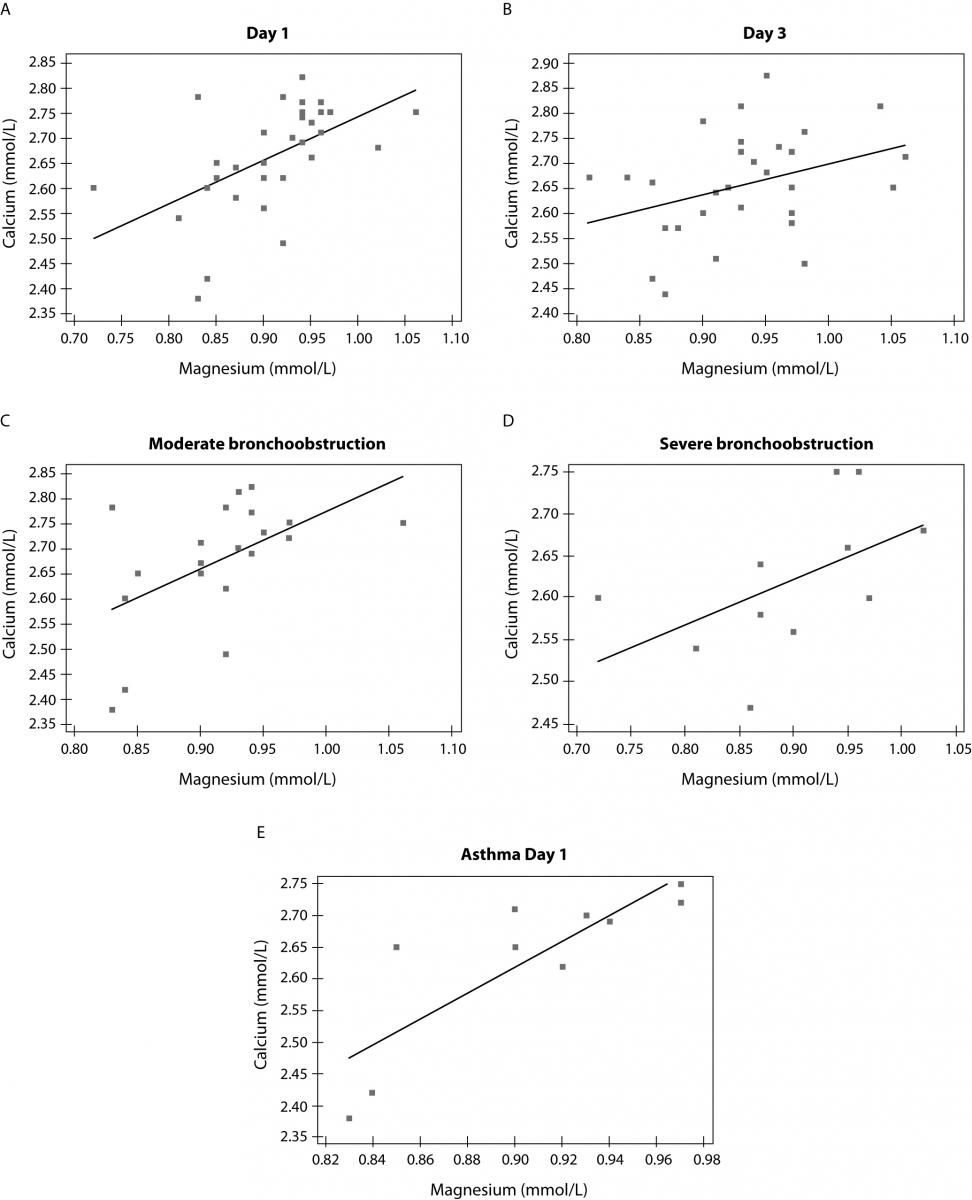