[1] Department of Biochemistry and Clinical Analysis, Faculty of Pharmacy, University of Sarajevo, Sarajevo, Bosnia and Herzegovina

Introduction: The enzyme 11β-hydroxysteroid dehydrogenase type 1 (11β-HSD1) catalyzes the conversion of the hormonally inactive cortisone to active cortisol, thus facilitating glucocorticoid receptor activation in target tissues. Increased expression of 11β-HSD1 in adipose tissue has been associated with obesity and insulin resistance. In this study, we investigated the association of two 11β-HSD1 gene (HSD11B1) polymorphisms with the metabolic syndrome (MetS) and its characteristics in the Bosnian population.
Materials and methods:The study included 86 participants: 43 patients diagnosed with MetS and 43 healthy controls. Subjects were genotyped for two HSD11B1 gene polymorphisms: rs846910: G>A and rs45487298: insA, by the high resolution melting curve analysis. Genotype distribution and an influence of genotypes on clinical and biochemical parameters were assessed.
Results:There was no significant difference in the mutated allele frequencies for the two HSD11B1 gene polymorphisms between MetS patients and controls. In MetS patients, no significant associations between disease-associated traits and rs45487298: insA were found. Regarding rs846910: G>A variant, heterozygous patients (G/A) had significantly lower systolic (P = 0.017) and diastolic blood pressure (P = 0.015), lower HOMA-IR index (P = 0.011) and higher LDL-cholesterol levels (P = 0.049), compared to the wild-type homozygotes. In the control group, rs45487298: insA polymorphism was associated with lower fasting plasma insulin levels (P = 0.041), lower homeostasis model assessment insulin resistance (HOMA-IR) index (P = 0.041) and lower diastolic blood pressure (P = 0.048). Significant differences between rs846910: G>A genotypes in controls were not detected. Haplotype analysis confirmed the association of rs45487298: insA with markers of insulin resistance in the control subjects.
Conclusions: Our results indicate that a common rs45487298: insA polymorphism in HSD11B1 gene may have a protective effect against insulin resistance.

The metabolic syndrome (MetS) represents a cluster of metabolic disorders including abdominal obesity, dyslipidemia (elevated triglycerides and lowered high-density lipoprotein cholesterol (HDL-cholesterol)), hyperglycemia and hypertension (1). These metabolic abnormalities are associated with increased risk for cardiovascular disease and type 2 diabetes mellitus (2,3). It is estimated that about 20-30% of the world’s adult population has MetS (3). Diagnostic criteria for MetS have changed during the last decade with new insights into the pathogenesis of disease. Different health organizations had proposed their own criteria and finally in 2009, a new harmonized definition was accepted (1). MetS is diagnosed when any three of the following five criteria are met: increased waist circumference (with population- and country-specific cut points), triglycerides of at least 150 mg/dL (≥ 1.7 mmol/L), HDL-cholesterol less than 40 mg/dL (< 1.0 mmol/L) in males and less than 50 mg/dL (< 1.3 mmol/L) in females, blood pressure of at least 130/85 mmHg and fasting glucose of at least 100 mg/dL (≥ 5.6 mmol/L) (1). Recommended waist circumference thresholds for Europids are ≥ 94 cm for men and ≥ 80 cm for women (1). Abdominal obesity and physical inactivity are considered as major causes for MetS. Beside this, genetic factors, aging and endocrine disorders, all contribute to the susceptibility for disease (2).
The enzyme 11β-hydroxysteroid dehydrogenase type 1 (11β-HSD1) catalyzes the conversion of the hormonally inactive cortisone to active cortisol, thus facilitating glucocorticoid receptor activation in target tissues. It is a microsomal, nicotinamide adenine dinucleotide-dependent dehydrogenase, identified in many tissues, with highest levels of expression in the liver, gonads, adipose tissue, and brain (4). The similarities between Cushing’s syndrome and MetS lead to the hypothesis that increased cortisol concentrations in adipose tissue are implicated in the pathogenesis of visceral obesity and MetS. A transgenic mouse overexpressing 11β-HSD1 in adipose tissue, became a model for MetS with increased visceral fat mass, glucose intolerance, insulin resistance, dyslipidemia and hypertension (5). In contrast, 11β-HSD1 knockout mice, showed improved insulin sensitivity and lipid profile (6). Various studies (7-16), although not all (17), have reported increased 11β-HSD1 expression in subcutaneous adipose tissue in obese subjects. Some of them confirmed this association also in visceral adipose depots (7,11,16), while others did not (9,18,19). Several researches found positive correlations of 11β-HSD1 subcutaneous fat expression with markers of insulin resistance (10,12,14,15,18,19). Investigations in animal models and early results of human studies suggest that inhibitors of 11β-HSD1 are promising therapeutic drugs for obesity and diabetes (20), further supporting the role of 11β-HSD1 in the pathogenesis of MetS (21).
The gene encoding 11β-HSD1 (HSD11B1) is located on chromosome 1q32-q41. Several studies investigated associations of single-nucleotide polymorphisms (SNPs) of HSD11B1 with metabolic phenotype. Two SNPs within HSD11B1 gene (rs846910: G>A and rs12086634: G>T) have been associated with type 2 diabetes in Pima Indians (15). SNP rs846910: G>A was also associated with hypertension (22). Another polymorphism, insertion of adenine in intron 3 (rs45487298: insA), was associated with obesity and insulin resistance in children (23). On the contrary, Robitaille et al. found no association of three HSD11B1 gene variants with components of the MetS (24). Four other HSD11B1 polymorphisms were not associated with type 2 diabetes or metabolic parameters in Koreans (25).
This is the first study performed in population from Bosnia and Herzegovina, in which we examined a significance of genetic variations in the HSD11B1 gene (rs846910: G>A and rs45487298: insA), in the pathogenesis of MetS. Influence of genotypes on clinical and metabolic parameters was also assessed.

The study included a total of 86 participants from Bosnia and Herzegovina: 43 patients of General Hospital Tesanj, Zenica-Doboj Canton, diagnosed with MetS, and 43 healthy subjects. All research involving human subjects was done in accordance with the ethical recommendations and practices of the General Hospital Tesanj, and compiled with ethical principles of the Declaration of Helsinki. The study was approved by Ethics Committee of Cantonal Hospital Zenica and by the Institute for Genetic Engineering and Biotechnology, University of Sarajevo. Written informed consents were obtained for each participant involved in the study. MetS was diagnosed according to harmonized criteria from 2009 that include three or more of the following abnormalities: waist circumference ≥ 94 cm in men or ≥ 80 cm in women, triglycerides ≥ 1.7 mmol/L (or specific treatment for this lipid abnormality), HDL-cholesterol < 1.0 mmol/L in men or < 1.3 mmol/L in women (or specific treatment for this lipid abnormality), blood pressure ≥ 130/85 mmHg (or treatment for previously diagnosed hypertension) and fasting glucose ≥ 5.6 mmol/L (or previously diagnosed type 2 diabetes) (1). Patients with an acute infection and/or inflammation, endocrine disorders and those on insulin therapy were excluded from the study. Only 9 patients did not receive any therapy; 47% of all patients were treated with lipid-lowering drugs, 58% were treated with glucose-lowering drugs, and 74% received antihypertensive therapy. Control group consisted of 43 age-matched, healthy, non-obese subjects who had less than three features of MetS, and were not taking any medication during the course of the study.

Statistical analysis was performed using SPSS Statistics 17.0 software. A P value ≤ 0.05 was considered statistically significant. The differences in genotype frequencies between study groups were analyzed by chi-square (χ2) test and Fisher’s exact test (in the case where expected frequencies were less or equal to 5). Genotype association with clinical and biochemical markers was tested by Mann-Whitney test (data did not follow normal distribution). Linkage disequilibrium between two polymorphisms was calculated by 2LD program (30). Haplotype analyses were performed using PHASE 2.1 software (31).
Power analysis was performed using the Quanto program version 1.2.4 (32) and G*Power 3 software available at http://www.psycho.uni-duesseldorf.de/abteilungen/aap/gpower3.

Clinical and biochemical variables of MetS patients and controls are presented in Table 1. Most of the measured anthropometric, hemodynamic and metabolic parameters were significantly different between the two groups except for total and LDL-cholesterol concentration (Table 1).
Table 1. Clinical and biochemical characteristics of MetS patients and controls. 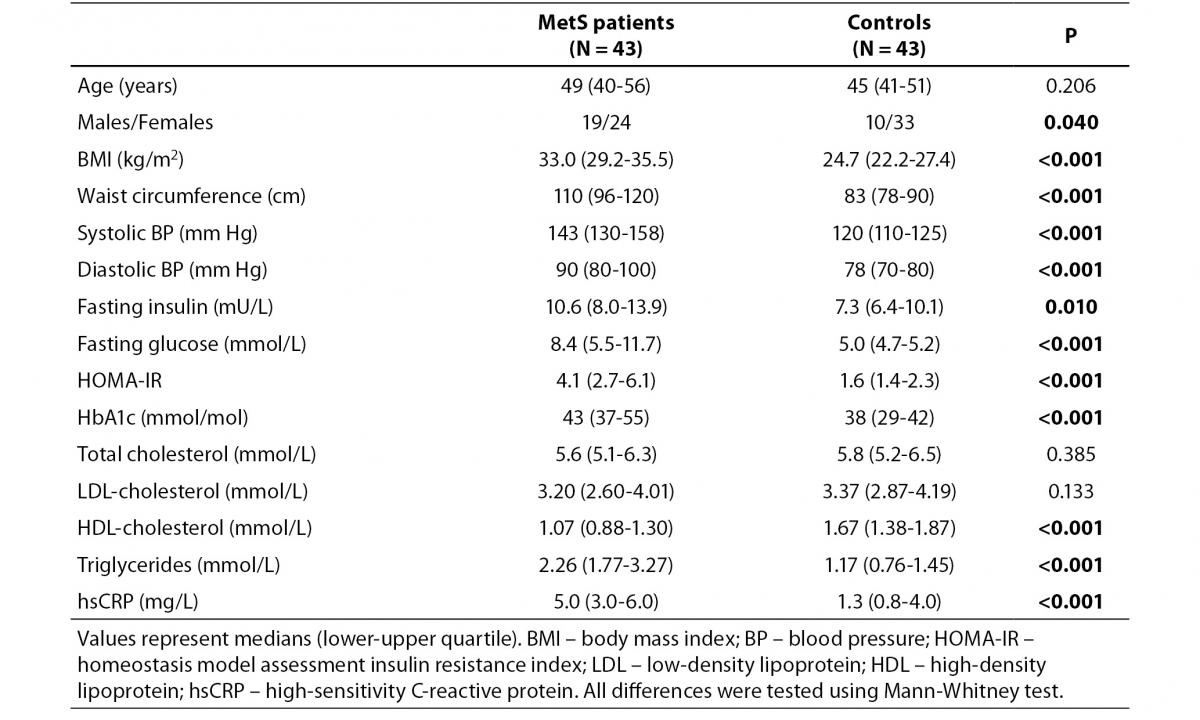 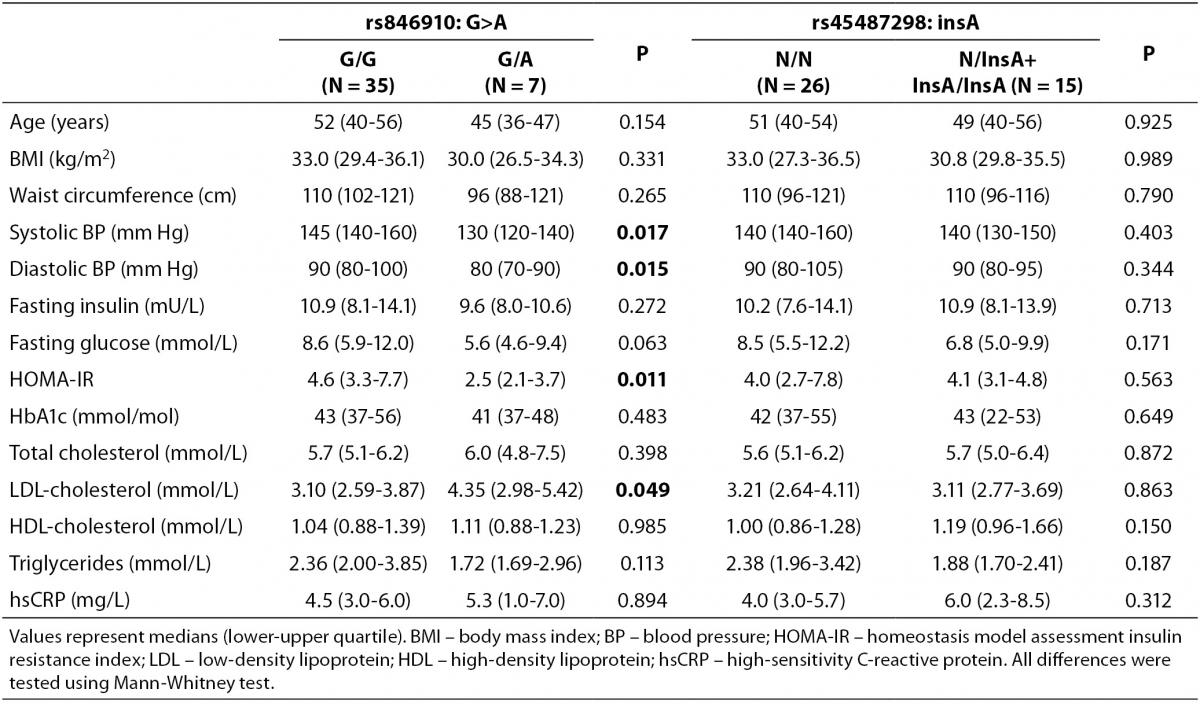 Comparisons of clinical and metabolic parameters between genotypes in the control group are shown in Table 4. The carriers of rs45487298: insA polymorphism had significantly lower fasting plasma insulin (P = 0.041), lower HOMA-IR index (P = 0.041), and lower diastolic blood pressure (P = 0.048), compared to the wild-type homozygotes (Table 4). Significant differences between rs846910: G>A genotypes in control subjects were not detected (Table 4).
Table 4. Comparison of clinical and biochemical characteristics between different genotypes of rs846910: G>A and rs45487298: insA polymorphisms in the control group. 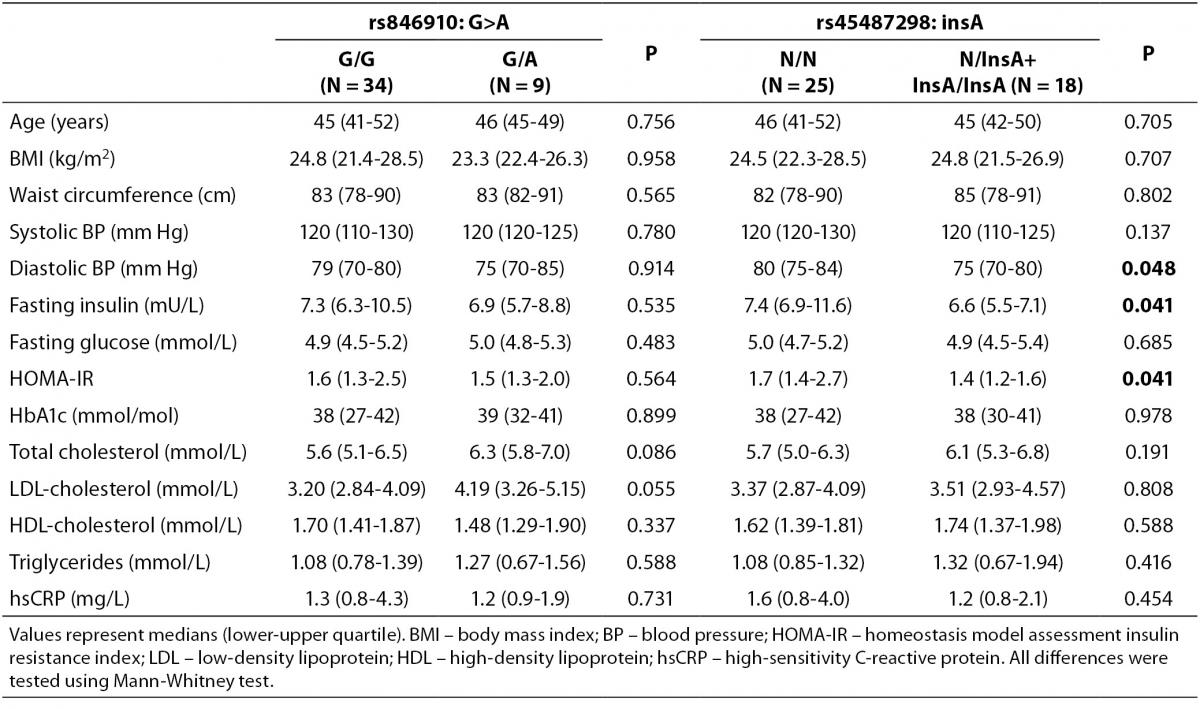 In addition, the haplotype analysis was also performed. The rs846910: G>A and rs45487298: insA polymorphisms were in moderate linkage disequilibrium (D’ = 0.418). Reconstructed haplotype and diplotype frequencies are shown in Table 5. There was no significant difference in distribution of haplotype frequencies between MetS patients and controls (P= 0.90). As AN and AInsA haplotypes were rare, only the associations of GN and GInsA haplotypes with clinical and biochemical markers were tested. By comparing the effects of GN/GInsA and GInsA/GInsA diplotypes together, to complete wild-type diplotype, we examined the potential effect of the InsA polymorphism solely (without rs846910: G>A). In MetS patients group, significant associations were not found (data not shown). In the control group, analysis confirmed the above mentioned results: carriers of GN/GInsA and GInsA/GInsA diplotypes, as compared to GN/GN individuals, had lower fasting insulin level (data presented as median (1st-3rd quartile): 8.1 (7.0-13.9) mU/L vs. 6.2 (4.7-7.1) mU/L; P= 0.011) and lower HOMA-IR index (1.8 (1.4-2.8) vs. 1.3 (0.9-1.6); P = 0.016).
Table 5. Haplotype and diplotype frequencies of rs846910: G>A and rs45487298: insA variants in MetS patients and controls.