The effects of different syringe volume, needle size and sample volume on blood gas analysis in syringes washed with heparin

Introductıon: We evaluated the effect of different syringe volume, needle size and sample volume on blood gas analysis in syringes washed with heparin.
Materials and methods: In this multi-step experimental study, percent dilution ratios (PDRs) and final heparin concentrations (FHCs) were calculated by gravimetric method for determining the effect of syringe volume (1, 2, 5 and 10 mL), needle size (20, 21, 22, 25 and 26 G) and sample volume (0.5, 1, 2, 5 and 10 mL). The effect of different PDRs and FHCs on blood gas and electrolyte parameters were determined. The erroneous results from nonstandardized sampling were evaluated according to RiliBAK’s TEa.
Results: The increase of PDRs and FHCs was associated with the decrease of syringe volume, the increase of needle size and the decrease of sample volume: from 2.0% and 100 IU/mL in 10 mL-syringe to 7.0% and 351 IU/mL in 1 mL-syringe; from 4.9% and 245 IU/mL in 26G to 7.6% and 380 IU/mL in 20 G with combined 1 mL syringe; from 2.0% and 100 IU/mL in full-filled sample to 34% and 1675 IU/mL in 0.5 mL suctioned sample into 10 mL-syringe. There was no statistical difference in pH; but the percent decreasing in pCO2, K+, iCa2+, iMg2+; the percent increasing in pO2 and Na+ were statistical significance compared to samples full-filled in syringes. The all changes in pH and pO2were acceptable; but the changes in pCO2, Na+, K+ and iCa2+ were unacceptable according to TEa limits except fullfilled-syringes.
Conclusions: The changes in PDRs and FHCs due nonstandardized sampling in syringe washed with liquid heparin give rise to erroneous test results for pCO2 and electrolytes.

Fifty years ago, some researchers first reported that collection of blood gas samples into the syringe with liquid heparin caused dilutional error (1-3). But, heparinized blood collection for blood gas analysis in some clinics or hospitals is still preferred in plastic syringes with liquid heparin instead of syringes with dry heparin due to economical and traditional reasons.
Some researchers notified recommendations about standardized blood collection into syringes washed with liquid heparin (4,5). Also, International Federation of Clinical Chemistry (IFCC) recommended for blood gas sampling to fill dead space of the syringe with heparin, to lubricate the inner wall of the syringe, to expel the excess anticoagulant and to collect the least 20 times the dead space volume of blood (6). Clinical and Laboratory Standards Institute (CLSI) and American Association for Respiratory Care (AARC) published the guidelines for blood gas analysis which were not described the blood collecting procedure in syringes washed with liquid heparin, but they warned the combine effects from together dilutional and chemical effects of liquid heparin to blood gas tests (7,8).
Despite all these publications, we have frequently observed the nonstandardized blood gas sampling with liquid heparin (especially using different volumes syringes, different sizes needles and collecting different sample volume) is used for patient’s comfort, easier application or ignorance about the effects. For these reasons, in this study, we evaluated the effect of i) dilution rates of disposable plastic syringes and needles; ii) final heparin concentrations; and iii) non-standardized sampling volume on blood gas parameters sampled in syringes of various sampling capacity, washed with heparin.

This multi-step experimental study was performed between June and August 2011 in the Central Laboratory of Dokuz Eylül University Hospital (Izmir, Turkey).
Step 1: Determining the effect of syringe volume and needle size on percent dilution ratios (PDRs) and final heparin concentrations (FHCs):
The PDRs and FHCs in different volumes syringes and different sizes needles were calculated from the dead space and total capacity for each material. Different volumes disposable plastic syringes with attached needles (1, 2, 5 and 10 mL) and different sizes needles with attached tips (20, 21, 22, 25 and 26G) were weighed 10 times. For suctioning and dispensing pure water, the needles were combined with 1 mL-syringes. Then, the needles were weighed without syringes. The balance was zeroed before each measurement. The measurements and calculations performed are described below.
Descriptions of weights:
-   Empty weight; newly unpacked empty syringes attached with needles and needles attached with tips were weighed.
-   Full-filled weight; syringes and needles which were filled with pure water to total capacity were weighed.
-   Washed weight; syringes were weighed after applying standardized washing with pure water. For standardized washing, syringes were washed consecutively 2 times by filling to total capacity graduation lines and then emptying to zero graduation lines with pure water.
Descriptions of calculations:
-    Dead space (DS); is the remaining amount of pure water in syringes which were filled with pure water and then emptied, in needles which were only filled with pure water, it was calculated via formula below:
-     Total capacity (TC); is the amount of suctioned pure water into syringes, it was calculated via formula below:
-     Percent dilution ratio (PDR); is the percent ratio of liquid volumes retain in dead space of syringes or needles to volumes of total capacity of syringes, is the amount of dilution error, it was calculated via formula below:
-     Final heparin concentration (FHC); is the amount of heparin in sample which suctioned to syringes washed with liquid heparin, is the amount of chemical error, it was calculated via formula below:
-     Percent of total dead space (PTDS): is the percent ratio of dead space of needles to total dead space of syringes. It was calculated using formula below:
Step 2: Determining the effect of sample volume size on PDRs and FHCs:
After all syringes were washed, 0.5 mL and 1 mL of pure water were suctioned into 1 mL- syringes; 0.5 mL, 1 mL and 2 mL into 2 mL- syringes; 0.5 mL, 1 mL, 2 mL and 5 mL into 5 mL- syringes; 0.5 mL, 1 mL, 2 mL, 5 mL and 10 mL into 10 mL- syringes for determining the effect of nonstandardized sampling size that is less than the full volume sampling on dilutional and chemical error. Filled and emptied syringes with attached needles were weighed. Total capacities of syringes, PDRs and FHCs in syringes were calculated.
Step 3: Determining the effect of different PDRs and FHCs on blood gas and electrolyte parameters:
50 mL venous blood samples in previously heparinized syringes were obtained from 7 volunteers. Whole blood samples obtained from each volunteer were suctioned into 10 mL-syringes previously washed with liquid heparin, in volumes of 0.5 mL, 1 mL, 2 mL, 5 mL and 10 mL. Because of all samples analysis finished in > 30 minutes, the samples (50-mL whole blood and 10-mL experimental aliquots) were kept on ice until the analysis and the samples were remixed by inverting and rolling horizontally before analysis. Baseline whole blood sample aliquots suctioned into empty syringes with no additive and no washed were analyzed for comparison before each set. The error of baseline samples which have approximately 10 IU/mL of FHC (and 0.2% of PDR) was neglected. Each aliquot set was analyzed for blood gas parameters as soon as possible within themselves (within 5-10 minutes). Then, the changes and the percent changes from baseline were calculated for each parameter. They were calculated via formula below:
These steps are presented in a flowchart in Figure 1.

Figure 1. Flowchart of the Step 3.
Step 4: Determining the erroneous results due to the nonstandardized sampling size in random clinical samples according to the German Medical Association Directive on Quality Assurance of Quantitative Laboratory Tests for Medical Purposes (RiliBAK)’s Allowable Total Error (TEa):
According to six-month data, on average 3109 blood gas samples per month are analyzed on two blood gas devices in Central Laboratory of Dokuz Eylul University Hospital. The samples which have < 0.5 mL for 10 mL-syringes and < 0.2 mL for other syringes of sampling size are rejected because of blood gas device warns “no sample error” alarm. The distribution of samples according to sampling size were determined from the consecutive 100-routine blood gas samples at working hours in last 2 days to our laboratory. Then the bias (%) of routine blood gas results according to PDRs and FHCs from nonstandardized sampling size were compared according to the RiliBAK’s TEa. The total allowable limits of RiliBAK are 0.06 for pH, 12% for pCO2, 12% for pO2, 5% for Na+, 9.1% for K+, 15% for Ca2+ (10).
Analytical validation of experimental methodology
Gravimetric measurements
To validate the methodology in experimental methods used in this study, 0.1 mL and 1 mL of pure water were suctioned by calibrated micropipettes and then weighed 20 times. Micropipets were calibrated with a different precision balance by a commercial calibration laboratory (Omega Kalibrasyon Merkezi, İzmir, Turkey) which is accredited according to ISO/EIC 17025 by Turkish Accreditation Agency (TURKAK). Then CV% ((SD/Mean) x 100), bias% ([(Measured value – True value) / True value] x 100) and total error (Bias% + (1.65 x CV%)) were calculated. CV% were 0.81% and 0.16%, bias% were 0.60% and 0.30%, total error were 2.19% and 0.58% for 0.1 mL and 1 mL volumes, respectively.
The same measurements were repeated by using heparin. Then densities of water and heparin were calculated as 0.995 g/mL and 1.025 g/mL for 1 mL volumes, respectively. The density difference between heparin and pure water was calculated as 3.1%. Considering that this difference in density is too small to cause any difference in attachment to inner surface of syringes and needles between heparin and water, thus pure water was used instead of heparin for dead space determination.
Blood gas measurements
The pH, pCO2, Na+, K+, iCa2+, iMg2+ were measured by ion selective electrode potentiometry, and pO2 was measured by amperometry on blood gas analyzer. The method validations of tests done according to the requirements of the ISO 15189:2007 (11). Coefficient variation (CV) (%) and bias (%) of tests were determined, and then total errors (TE) of tests were calculated by “TE = bias (%) + 1.65 CV (%)” formula. Tests were validated, if total errors of tests were lower than the RiliBAK TEa (10).

The distribution of the variables was determined using Kolmogorov-Smirnov test. In normally distributed groups the results were presented with mean and SD. The significance of the changes in blood gas and electrolyte parameters at different PDRs and FHCs compared with PDRs and FHCs of full-filled syringes were analyzed by one-way ANOVA using PASW Statistics or Windows 18.0 (IBM Corporation, NY, US). Post hoc analysis was performed by Bonferroni posthoc test because of testing the complex pairs and reducing the probability of a Type I error (12). P value < 0.05 was considered significant. 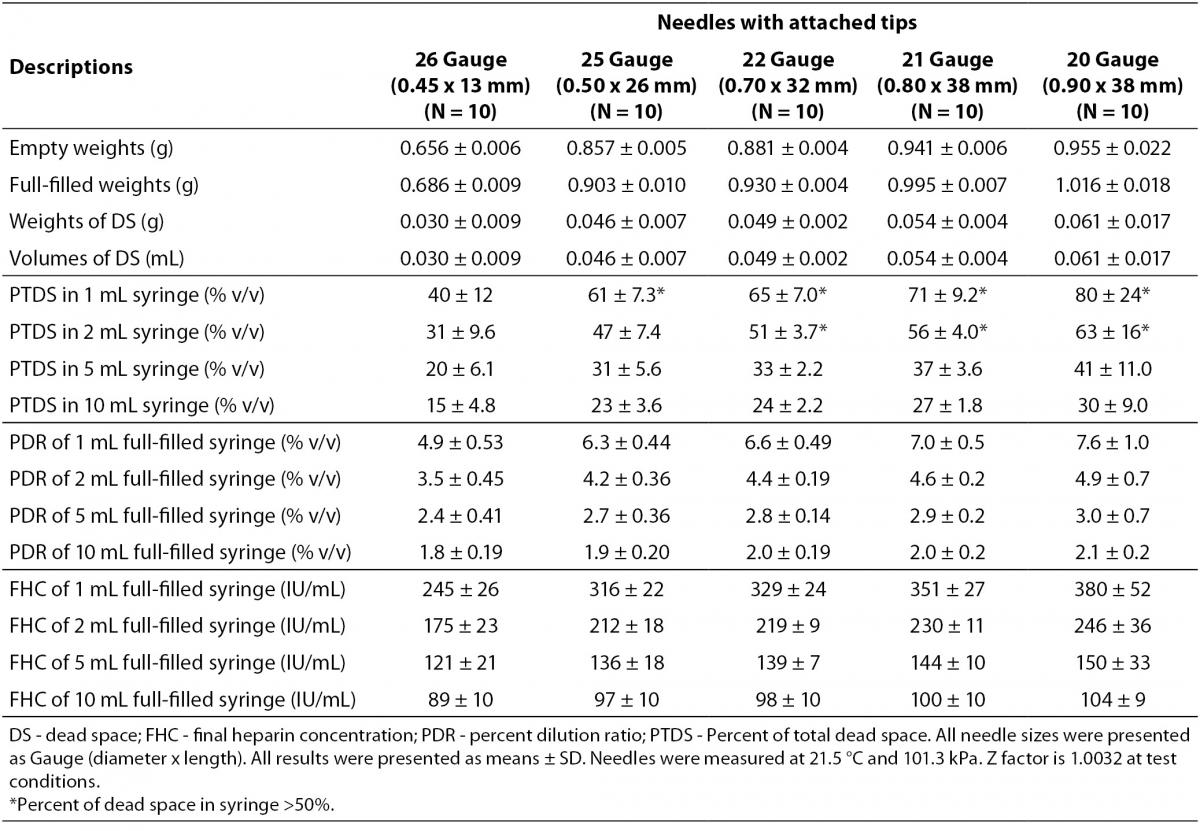 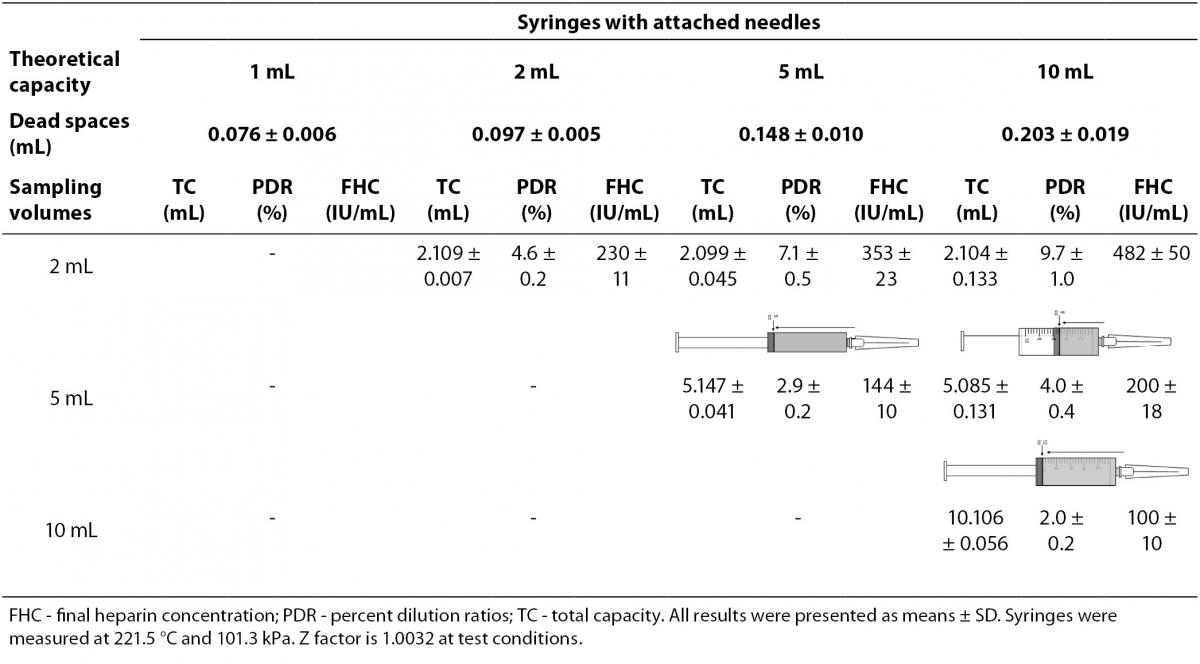 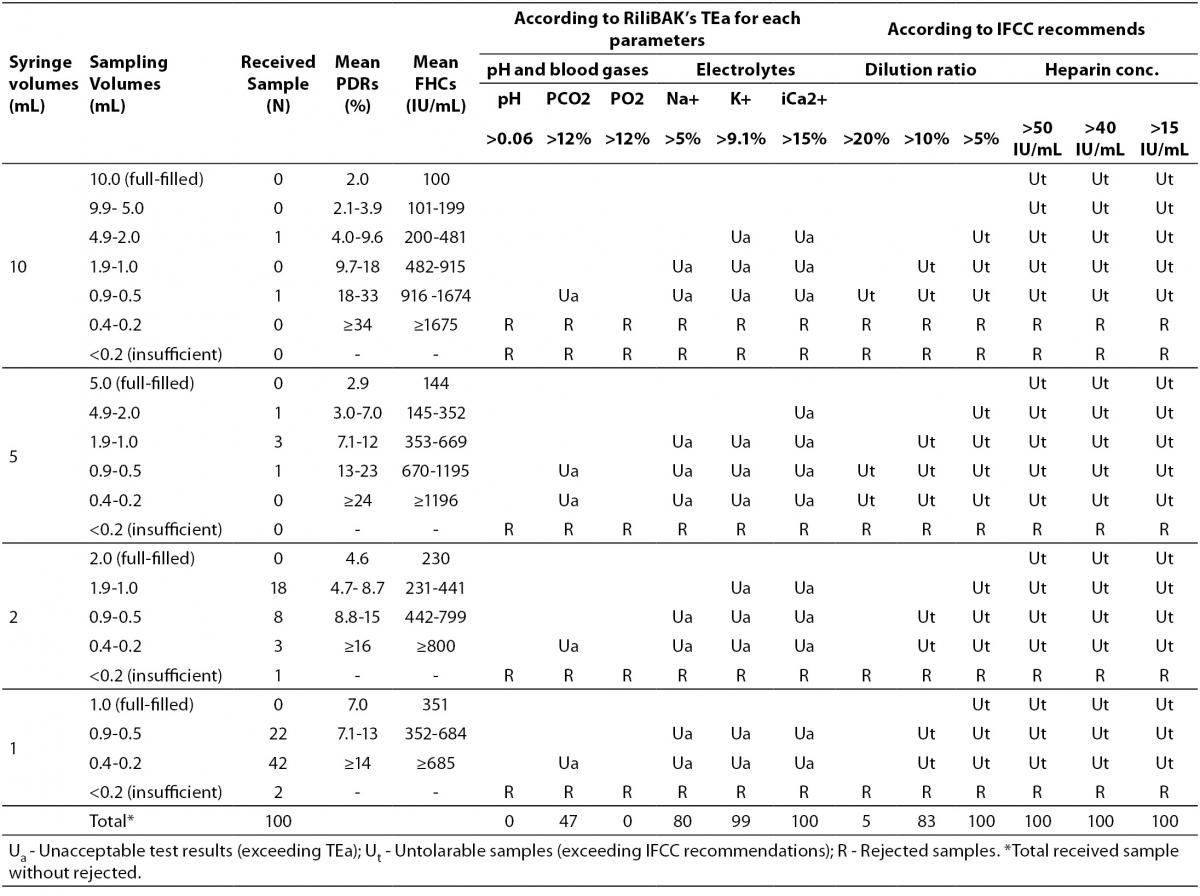 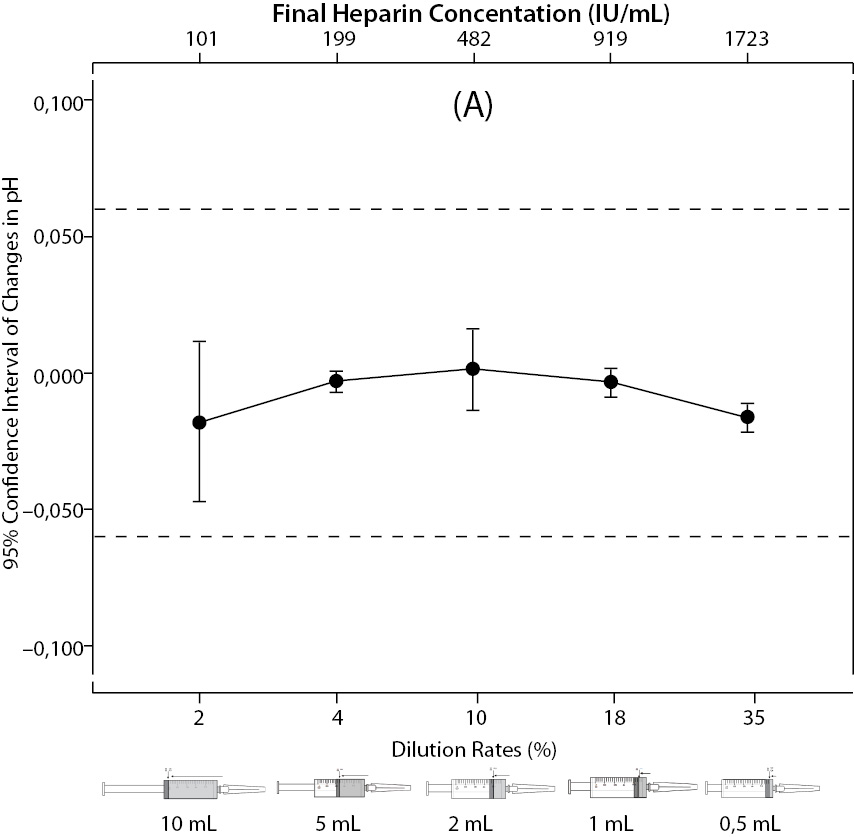 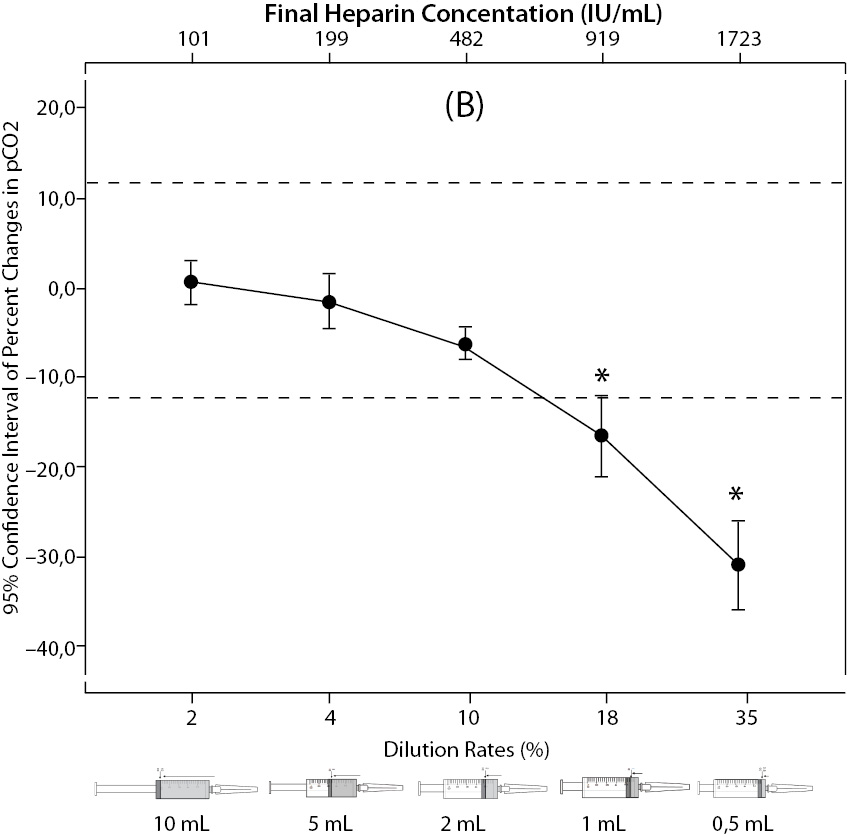 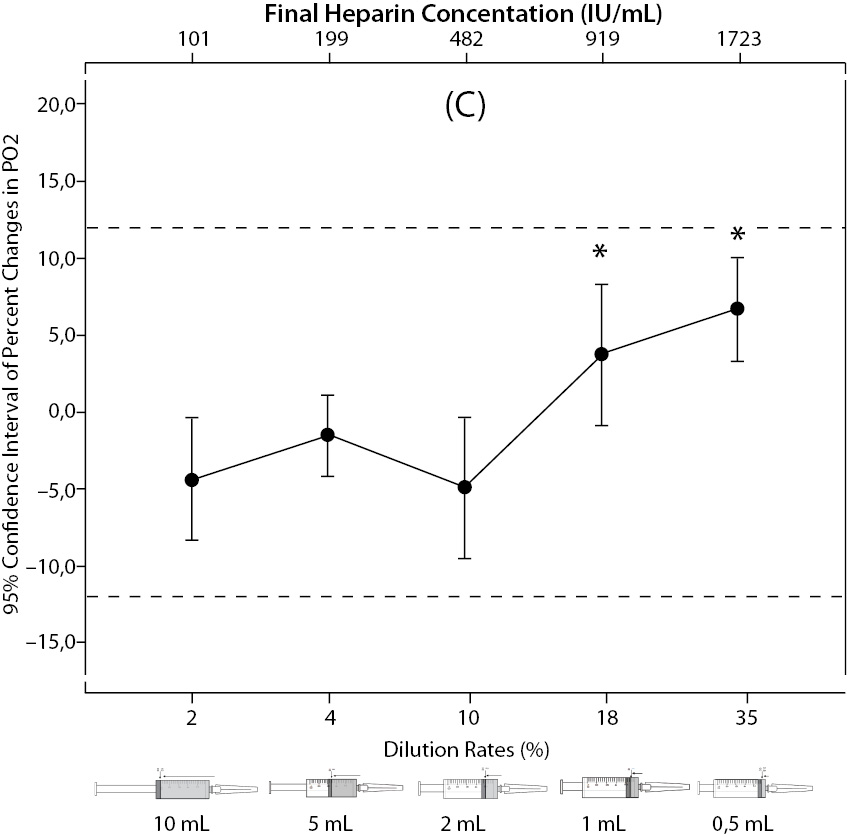 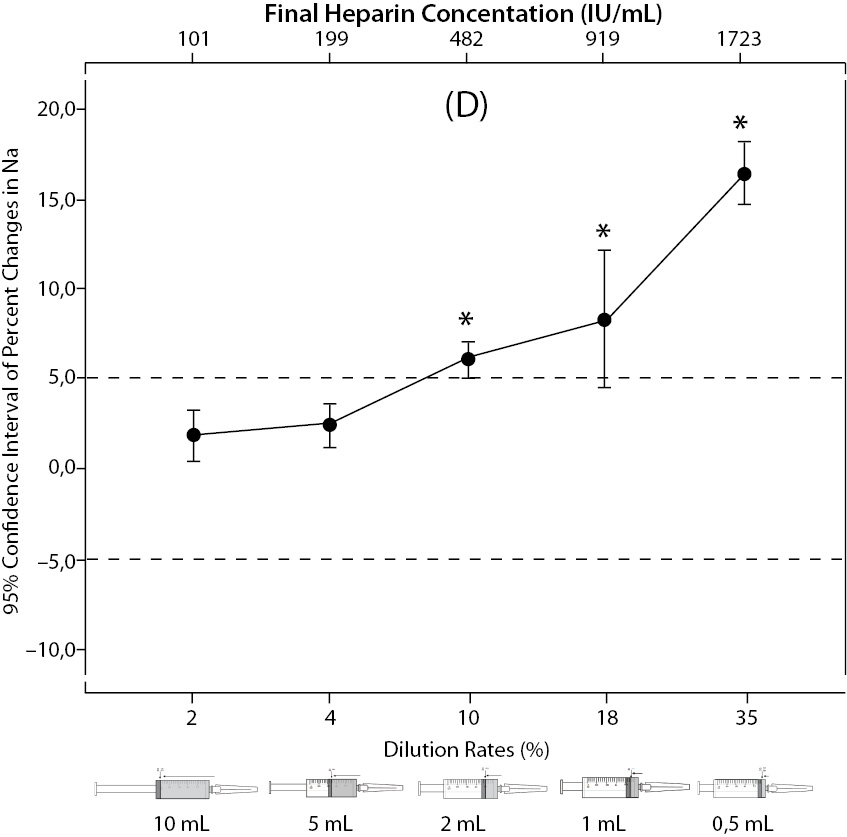 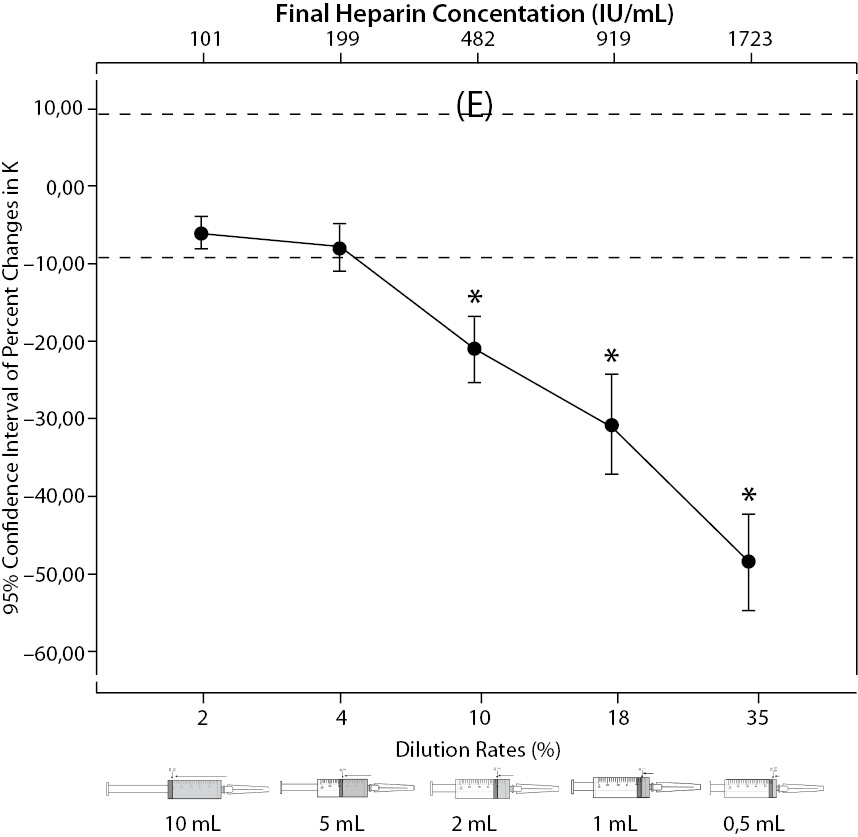 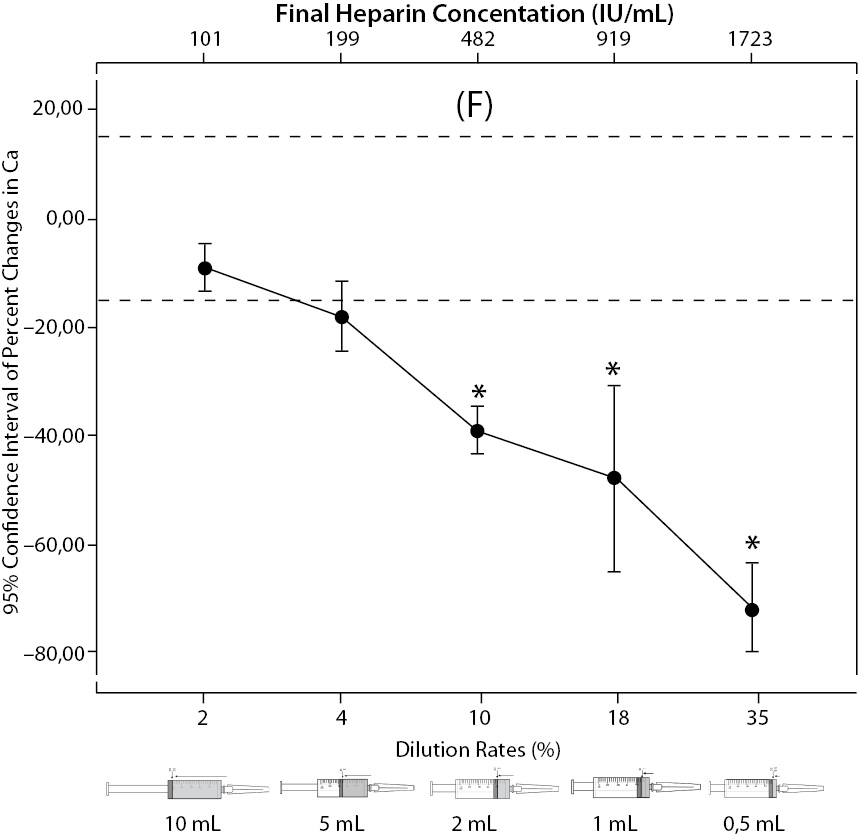 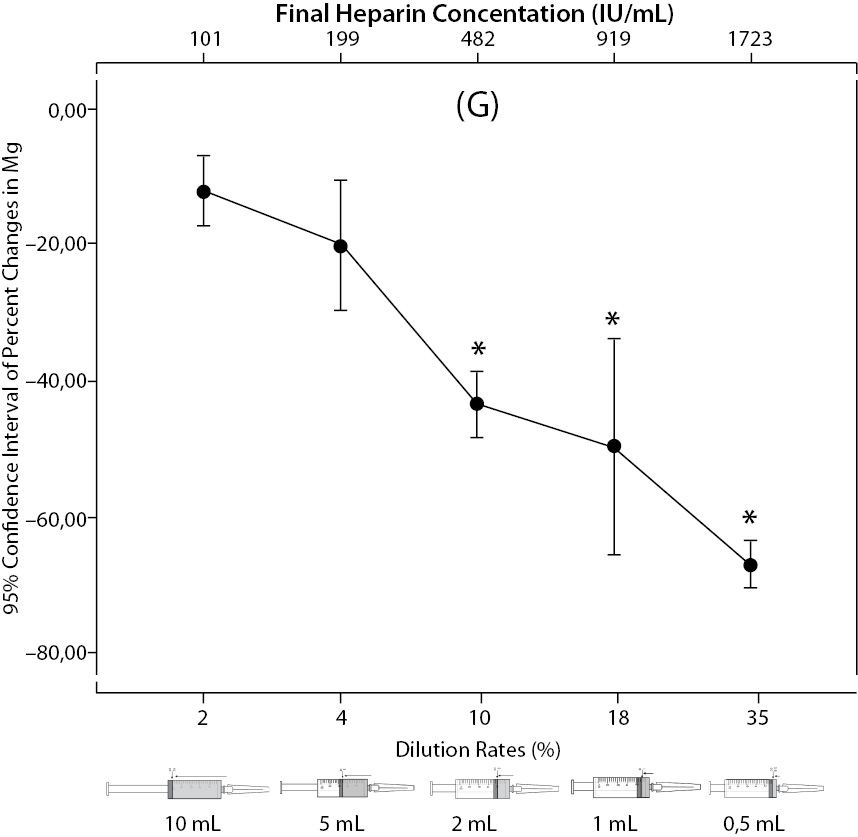 Figure 2. The changes in pO2 (C), Na+ (D), K+ (E), iCa+2 (F), iMg+2 (G) at different percent dilution ratios and final heparin concentrations according to experiments with 10 mL syringes. They were compared binary with PDRs and FHCs of full-filled syringes The horizontale dotted line indicates the acceptable limits for TEa according to RiliBAK except iMg. *P < 0.05 in post hoccomparisons with full sampling in syringes.
The erroneous results due to the nonstandardized sampling size in random clinical samples according to RiliBAK’s TEa
In our laboratory,the 39% of blood gas samples were received from emergency department, 25% from pediatrics, 17% from chest disease departments, 16% from internal medicine and 3% from surgical departments. The 73% samples were arterial blood and, 27% were venous blood which is preferred for evaluating only acid base status in clinics. It was observed that small volume syringes for blood gas sampling were used more frequently in our hospital (64% with 1 mL-syringes, 29% with 2 mL-syringes, 5% with 5 mL-syringes and 2% with 10 mL-syringes), and the syringes were not full-filled up to their capacity. Three insufficient samples were rejected. It is indicated in Table 4 that nonstandardized sampling caused error above TEa limits of RiliBAK in 47% of pCO2 results, 80% of Na+ results, 99% of K+ results and 100% of iCa2+ results (10).

We wish to thank Erol Medikal (Istanbul, Turkey) which is the sales office of Nova Instruments in Turkey for blood gas reagents and technical supports in blood gas analysis.