Background: It is still uncertain whether or not avoidance to let disinfectant alcohol dry at the site of venipuncture is a source of spurious hemolysis when drawing venous blood.
Methods: In a consecutive series of 52 outpatients referred for routine laboratory testing, venous blood was drawn by direct venipuncture with (odd group) or without (pair group) wiping 70% isopropyl alcohol at the site of venipuncture. A 3.5 mL evacuated tube with clot activator and gel separator was drawn from a vein of the upper limb, serum was immediately separated with standard centrifugation and tested for potassium, lactate dehydrogenase (LD), aspartate aminotransferase (AST) and hemolysis index (HI) on Roche Cobas.
Results: No specimen was discarded for unsatisfactory venipuncture. No differences for age and gender were observed between groups. As regards the four parameters investigated, no significant differences could be observed between patients in whom blood was drawn with or without letting the alcohol dry. It is also noteworthy that no sample in both groups exceeded the conventional sample rejection threshold of cell-free hemoglobin.
Conclusions: The results of our prospective, randomized study attest that failure to wipe alcohol at the site of venipuncture should not be considered as a potential source of spurious hemolysis when drawing blood.

The collection of blood specimens is unavoidable in laboratory diagnostics, wherein venous blood samples represent the specimens of choice for the vast majority of tests (1). Although blood drawing is commonly perceived as an easy, foolproof and safety procedure, several evidences attest that this practice carries inherent risks, which ultimately make it the leading source of errors throughout the total testing process (1-4). In order to minimize the risk of collecting unsuitable specimens and jeopardizing patient health, international and national recommendations have been released for collection of diagnostic blood specimens by venipuncture, including those issued by the Clinical Laboratory Standards Institute (CLSI) (5), the World Health Organization (WHO) (6), the Italian societies of clinical chemistry and laboratory medicine (7). All these guidelines and recommendations are aimed to provide a descriptive, stepwise procedure for the collection of diagnostic blood samples. Specifically, the guidelines list several steps that phlebotomists should accurately follow, including description of equipment, procedure and safety measures (5-7). Although most of items contained in these recommendations are derived from previous literature data and can hence be considered evidence-based, a few of them emerged from anecdotal reports or have been conveyed throughout the time as myths or legends, with no reliable scientific evidence in support.
In general, all guidelines clearly recommend that the skin at the venipuncture site should be cleaned with a sterile disinfectant (preferably 70% isopropyl or ethyl alcohol) applied to 5 x 5 cm gauze, swab or a cotton ball, using a firm but gentle pressure, starting from the centre of the venipuncture site and moving downward and outwards to cover an area of 2 cm or more. Once cleansing has been completed, alcohol should be allowed to dry completely for up to 30 seconds, or gently removed with clean gauzes or cotton balls (5-7). This recommendation is based on the fact that the presence of alcohol in excess at the site of venipuncture may be a source of discomfort for the patient (e.g., generating a burning sensation during skin perforation) and, especially, on the conceptual evidence notion that aspiration of alcohol through the collection needle into blood containers may cause spurious hemolysis, which is the leading source of unsuitable specimens in clinical laboratories (8,9). There is evidence that not all phlebotomists follow the best practices for collecting blood, including venipuncture site cleansing (10). Therefore, we planned a prospective, randomized study to establish whether failing to let disinfectant alcohol dry at venipuncture site may be a source of erythrocyte injury and spurious hemolysis while collecting blood.

The study population consisted of 52 consecutive outpatients referred to the outpatient clinic of the academic Hospital of Verona for routine testing, who had their blood collected by a single experienced phlebotomist over one typical working morning (from 7:00 to 10:00 AM). According to our experimental design, blood was always drawn with a 0.8 x 21 mm, 21-gauge straight needle from a vein of the upper limb. In all patients, a 13 x 75 mm, 3.5 mL Venosafe vacuum tube with clot activator and gel separator (Terumo Europe N.V., Leuven, Beugium; ref. n. VF-054SAS06, lot 1203006) was collected immediately after needle insertion into the vein. In the odd group of outpatients (i.e., patients n. 1, 3, 5, etc), the venipuncture site was cleansed with a 2 cm round cotton ball (Artsana S.p.A., Como, Italy) containing 3 mL of 70% isopropyl alcohol (Mani-cute, Esoform, Rovigo, Italy) precisely added with a laboratory pipette. This type of alcohol, which is routinely used in our institution, was then allowed to dry for 30 sec, as for current guidelines (5-7), and the venipuncture was finally performed. In the pair group of outpatients (i.e., patients n. 2, 4, 6, etc), the venipuncture site was cleansed with an identical 2 cm round cotton ball containing 3 mL of alcohol, but the alcohol was not allowed to dry and the venipuncture was performed immediately (i.e., in less than 5 sec after cleansing).

The primary blood tubes were collected and filled up to nominal volume, and various phases of sample collection were homogenized, including identical resting time of outpatients (i.e., not less than 5 min), time of tourniquet placement (i.e., less than 1 min for all patients), as well as use of 21-gauge catheter and blood tubes of identical type and lot. All samples were transported to the core laboratory within 30 min after collection, where they were subjected to standard centrifugation (i.e., 1300 x g per 15 min at room temperature). The serum was separated and tested for potassium, lactate dehydrogenase (LD), aspartate aminotransferase (AST) and hemolysis index (HI) on Roche Cobas 6000 (C501 Module, Roche Diagnostics S.P.A., Milano, Italy). The alert indices were 0.1 g/L for potassium and LD and 0.25 g/L for AST. A previous study showed that the HI, which is measured on Roche instrumentation at 600/570 nm according to the method of Glick et al. (11) and is herein referred as cell-free hemoglobin, is highly correlated with the reference cyanmethemoglobin assay (12).

Results were finally shown as median and interquartile range (IQR). The significance of differences was assessed by Wilcoxon-Mann-Whitney test, using Analyse-it for Microsoft Excel (Analyse-it Software Ltd, Leeds, UK). The level of statistical significance was set at P < 0.05. Each volunteer provided an informed consent for being enrolled in this study, which was also carried out in agreement with the Declaration of Helsinki and under the terms of all relevant local legislation.

No specimen was discarded due to unsatisfactory venipuncture (i.e., difficulty to locate venous accesses or vein missing). Twenty six of the patients had alcohol wiped before venipuncture (odd group), whereas the remaining 26 had alcohol not allowed to dry before venipuncture (pair group), according to our protocol of randomization. No differences for age and gender were observed between groups (Table 1). As regards the four parameters investigated, no significant differences could be observed between patients in whom blood was drawn with and without alcohol wiped (Figure 1). It is also noteworthy that no sample in both groups exceeded the conventional sample rejection threshold of cell-free hemoglobin (i.e., 0.5 g/L).
Table 1. Influence of wiping or not wiping alcohol at the site of venipuncture on potassium, lactate dehydrogenase (LD), aspartate aminotransferase (AST) and cell-free hemoglobin. Values are given as median and interquartile range (IQR). 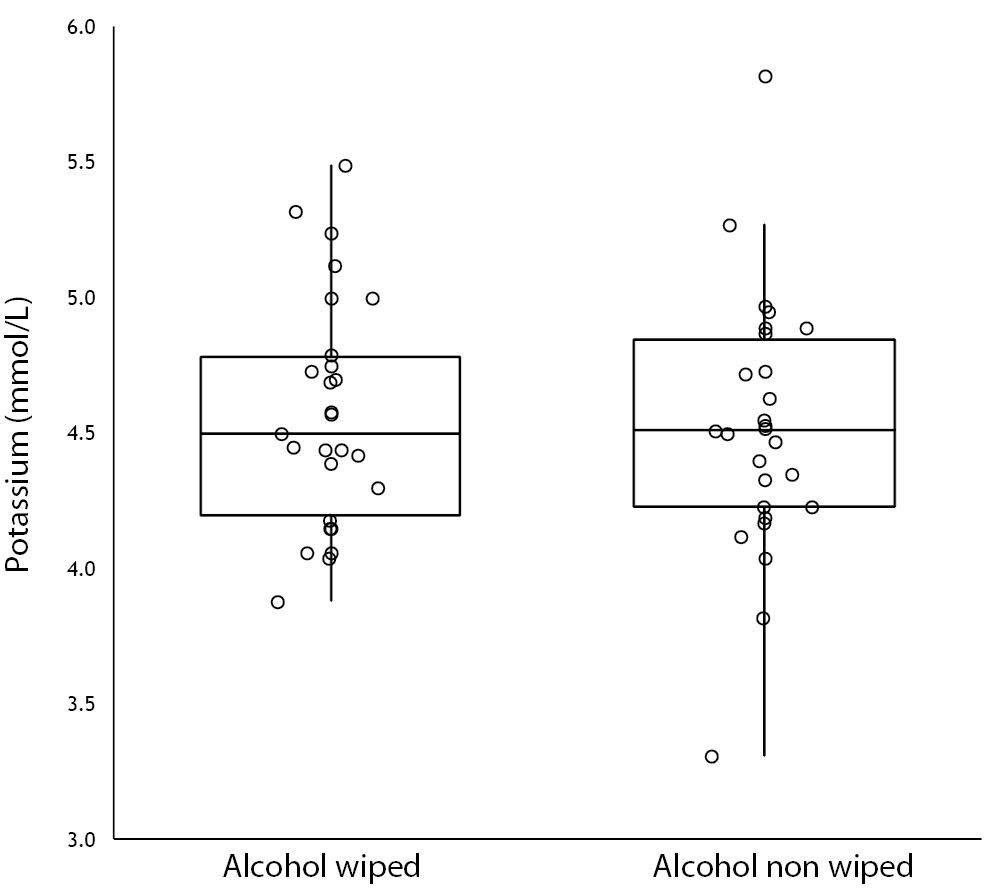 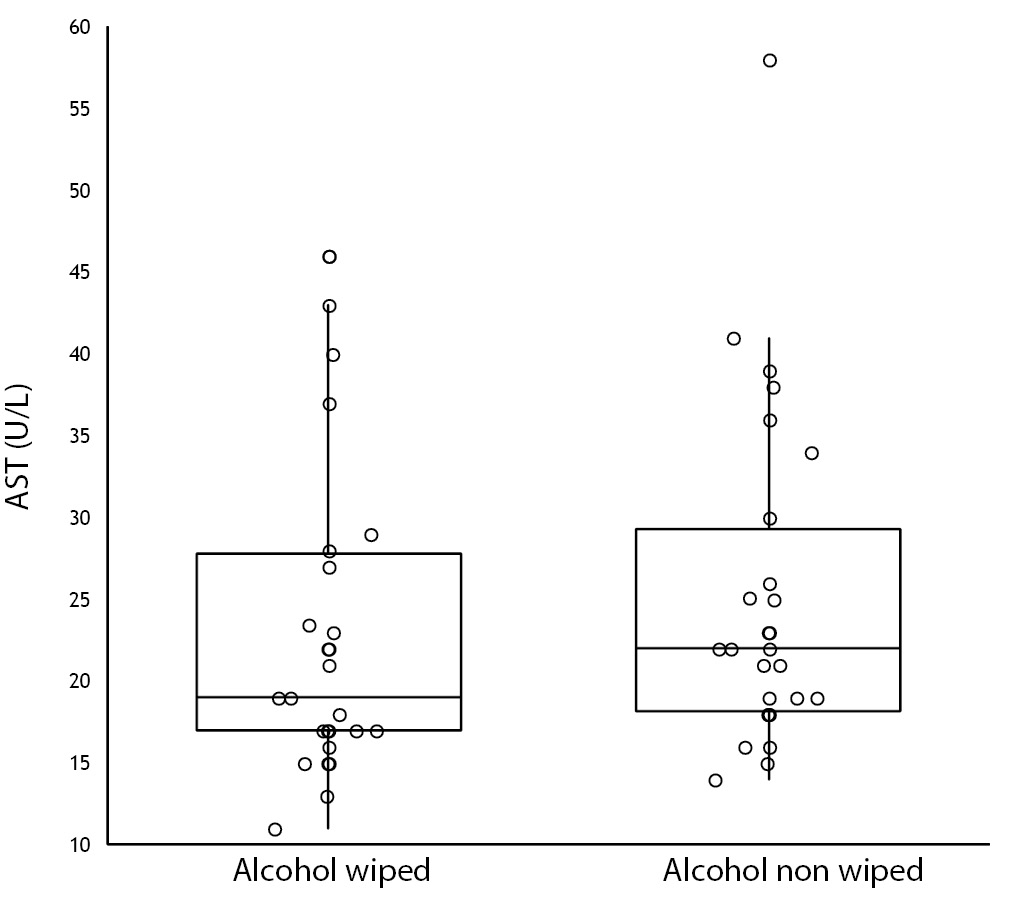 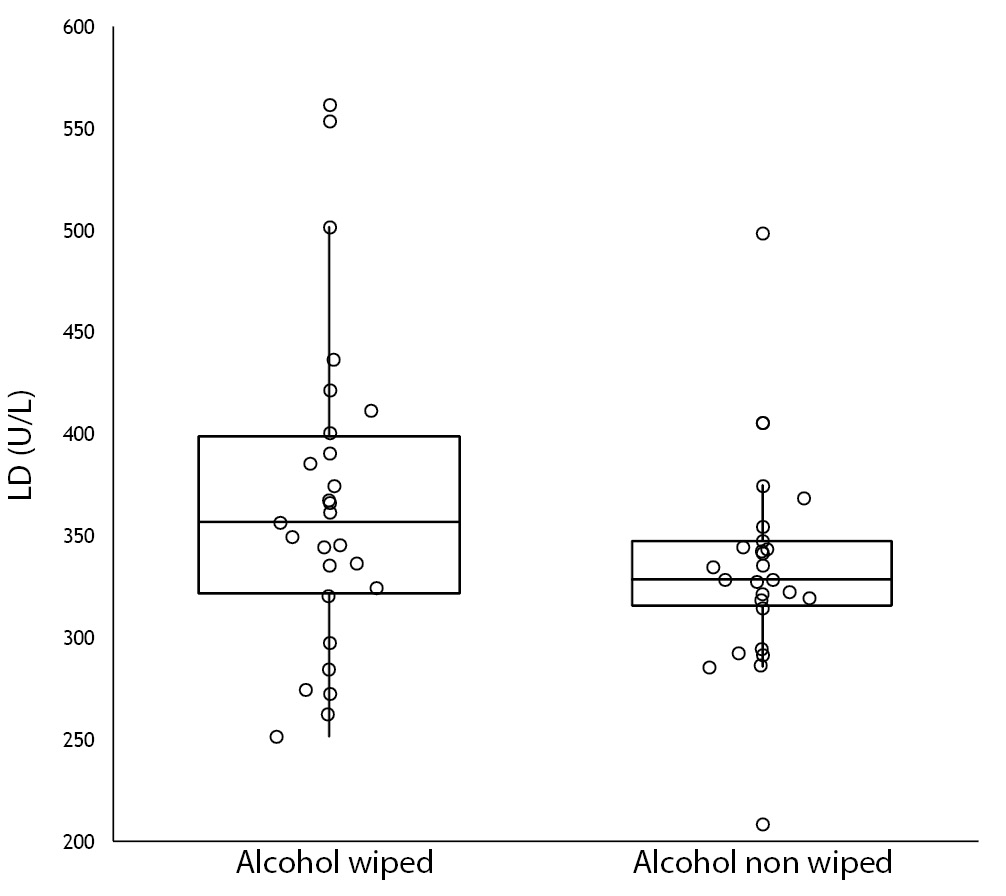 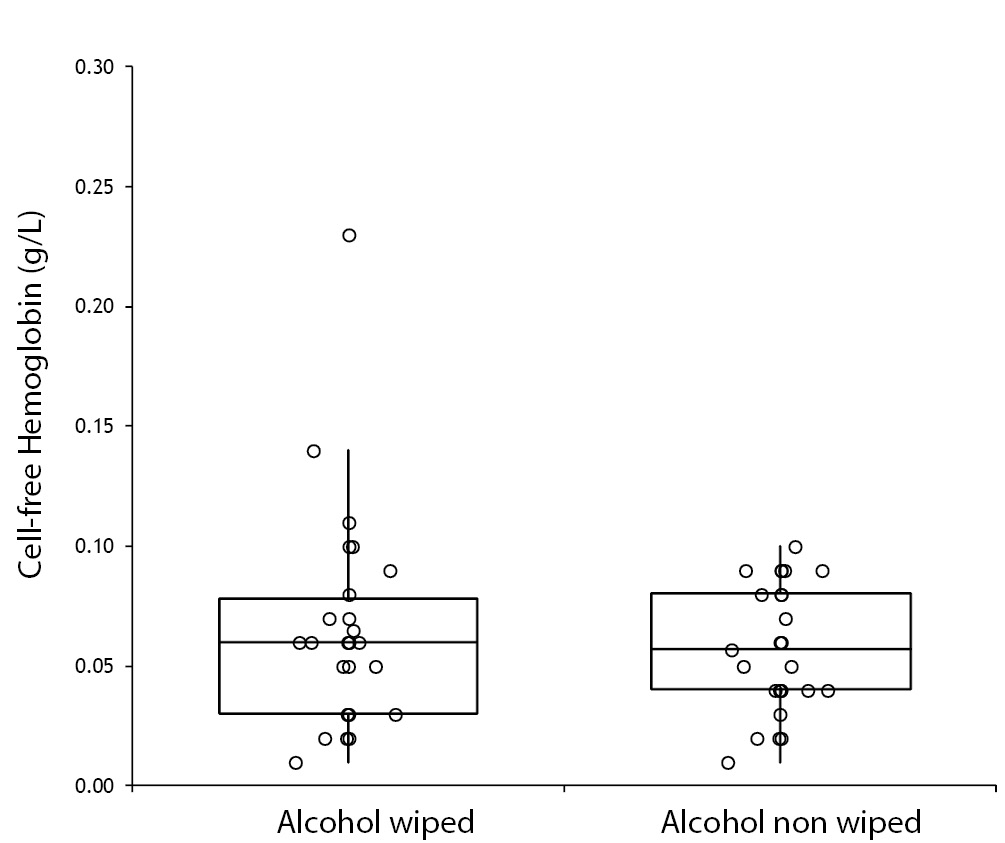 Figure 1. Influence of wiping or not wiping alcohol at the site of venipuncture on potassium (1A), aspartate aminotransferase (AST) (1B), lactate dehydrogenase (LD) (1C), and cell-free hemoglobin (1D). Values are shown on box and whiskers plot as median and interquartile (IQR) range.

The use of skin antiseptics before collection of blood specimens is commonplace, for preventing contamination of blood samples, especially those collected for blood culture and other microbiological examinations, as well as for safeguarding patient safety from accidental contamination with bacteria and other pathogens that colonize the skin (13). Although official guidelines specifically recommend excess alcohol to be removed from the venipuncture site based on the conceptual notion of preventing spurious hemolysis (5-7), no reliable evidence has been previously published to support this practice. It is also noteworthy that the adherence of phlebotomists to best practices is rather heterogeneous, with up to one third of them overlooking the recommended procedures for drawing blood, including avoidance of letting alcohol dry (10,14). It is hence nothing but ancillary to establish whether or not the presence of excess alcohol at the site of needle insertion is a real source of errors and bias in laboratory testing.
The results of this prospective, randomized pilot investigation attest that avoidance to wipe alcohol at the site of venipuncture should not be considered as a potential source of spurious hemolysis when drawing venous blood. This is not really surprising, considering that the limited amount of alcohol that may contaminate the blood during aspiration is probably insufficient to generate a substantial injury to blood cells, especially erythrocytes. Provided that our results can be confirmed in larger cohorts of participants, with much broader spectrum of laboratory tests and type of disinfectants, this finding has some interesting and practical implications. The current CLSI and WHO guidelines specifically indicates that the tourniquet should be placed (step 6) before cleansing the venipuncture site (step 8) (5,6). Considering that it is also recommended that the alcohol should be allowed to dry for 30 sec, this indication substantially prolongs the time of tourniquet placing, which is a well known cause of hemoconcentration (15). According to our data, shortening of time necessary for letting the alcohol dry, or even elimination of this step, would reduce the total time of blood drawing, thus increasing phlebotomists’ efficiency and lowering the risk of hemoconcentration. Another important aspect that emerges from our study is that avoidance to wipe alcohol before venipuncture should be no longer considered as a quality indicator for assessing phlebotomy practice, since this step has virtually no impact on procedure reliability. Finally, we also raised the issue that guidelines for drawing venous blood should be based on evidence rather than on anecdotal or conceptual notions, as in this case (5-7). It is noteworthy that the issue as to whether the presence of excess alcohol may cause discomfort to patients remains a matter of debate, which is hardly objective because it seems reasonable to assume that the potential burning sensation may be overcome by the more acute pain due to perforation of skin by the needle, regardless of alcohol not dried at the site of venipuncture. It is finally important to mention that this study only involved outpatientos. Since it is well-known that hospitalised patients are often sicker and tend to have blood samples (and cells) that behave differently, these findings need to be replicated in other healthcare settings.