Determinants of bone mineral density in patients on haemodialysis or peritoneal dialysis – a cross-sectional, longitudinal study

Introduction: The aim of the study was to identify biomarkers of alteration in bone mineral density (BMD) in patients on haemodialysis (HD) and peritoneal dialysis (PD).
Materials and methods: In a cross-sectional, longitudinal study dual-energy X-ray absorptiometry scans were performed in 146 HD-patients and 28 PD-patients. Follow-up after 14 months (mean) was conducted in 73 patients. As potential biomarkers we investigated parathyroid hormone (PTH), 25-hydroxy vitamin-D, ionised calcium, albumin, phosphate, and total alkaline phosphatases (t-ALP).
Results: Both groups of dialysis patients had lower BMD in the femoral neck (BMDneck) (P < 0.001) and forearm (BMDforearm) (P < 0.001) compared to healthy controls, but comparable BMD in the lumbar spine (BMDspine). BMD did not differ between dialysis types, but patients ever-treated with glucocorticoids had significantly lower BMD, while patients with polycystic kidney disease had higher BMD. BMD correlated with body weight, actual age, age at initiation of dialysis, duration of dialysis and levels of PTH and t-ALP. However, t-ALP only remained associated with low BMDspine after adjusting for other factors (P = 0.001). In the follow-up study all patients had decreased BMD in all three locations, but only for the lumbar spine there was a significant association between BMD and the bone markers t-ALP (P = 0.009) and PTH (P = 0.013).
Conclusions: Both HD and PD patients have low BMD, and increased concentrations of t-ALP is associated BMDspine after adjustment, while PTH and t-ALP is associated with decrease in BMDspine over time. This substantiates the use of these biomarkers in both types of dialysis patients.

Chronic kidney disease (CKD) inevitably leads to dialysis if the patient does not receive a renal transplant. Unfortunately, dialysis patients have a profound co-morbidity including bone disease attributable to hypocalcaemia, hyperphosphataemia, low levels of serum dihydroxy-cholecalciferol and secondary hyperparathyroidism (1). Chronic kidney disease-mineral and bone disorder (CKD-MBD) is furthermore likely to be aggravated by a history of glucocorticoid treatment as used in glomerulonephritis and after renal transplantation (2). Indeed, the incidence of femoral neck fractures is increased approximately four-fold in patients on dialysis compared with a general population (3), while the incidence of vertebral fractures may not be increased (4). Fracture is a significant cause of morbidity and mortality (5), and the incidence of fractures is also increasing with the increasing average age of dialysis patients.
Bone mineral density (BMD) as measured by dual-energy X-ray absorptiometry (DXA) relates to fracture risk in subjects with normal renal function (6), in patients with CKD (7) and patients on haemodialysis (8,9), although not evident from all studies or in all patient populations (10). Previous studies have reported decreased BMD in patients on dialysis (11-13), but although BMD measurements have been found useful for screening or assessing fractures (6) only few larger longitudinal studies are available on dialysis patients (14,15). The pattern of bone loss may be changing with the quality and duration of dialysis treatment and the age of the dialysis population. Of note, differences regarding bone loss may exist between patients on chronic haemodialysis (HD), usually performed four hours three times weekly, and peritoneal dialysis (PD), which may be continuous or performed every night, usually with a lower capacity to eliminate uremic waste products than HD. However, only one study has addressed this issue thoroughly (16).
Assessment of bone turnover markers (BTMs) has lately been recommended for CKD patients and dialysis patients (17). The recommended BTMs include total alkaline phosphatases (t-ALP) and bone-specific alkaline phosphatases (b-ALP), which in combination with serum parathyroid hormone (PTH) have been found useful for assessment of bone loss (15,18). Recently, a study of these BTM in HD patients could not confirm the use of b-ALP in patients with concomitant liver disease (19). The aim of the present study was to compare BMD of the femoral neck, forearm and spine in patients on HD and PD, respectively, and to identify BTMs in both type of dialysis patients.

This study was conducted from November 1999 until February 2001 as part of a single-centre study of dialysis patients at Odense University Hospital, where some preliminary data previously has been reported (20). Participants were selected from the cohort of HD or PD dialysis patients routinely treated on Department of Nephrology and were included if they were > 18 years. As part of a clinical routine patients were physically examined and routine blood sampling was performed to adjust treatment and check for co-morbidity. Patients with known severe diseases such as cancer, bone-metabolic disease or liver affection were excluded by judgement of the attending physician. A total of 174 patients, 146 on HD and 28 on PD, entered the study. They had all regular DXA scans as part of their routine care. None of the patients had any known history of fractures. All female dialysis patients had amenorrhea. Data was retrieved on primary renal disease, age at start of dialysis, dialysis duration, dialysis dose, previous renal transplantation, and glucocorticoid treatment ever. For a period, yearly DXA was intended as part of the clinical routine and for 66 HD patients and 7 PD patients, follow-up DXA was performed after a mean period of 14 ± 3 months (range 9-23 months). The large percentage of drop-out in the follow-up was due to the high mortality in this patient group and also, some patients received a renal transplant in the period and were therefore excluded.

Dialysis dose was calculated as Kt/V: (dialyzer clearance of urea x dialysis time)/patient total body water. According to the Kidney Disease Outcomes Quality Initiative (K/DOQI) Kt/V is given per week for PD patients and per session for HD patients (21). All patients had 1.25 mmol/L calcium in their dialysate and none of them received bisphosphonates.

BMD was measured in the femoral neck, lumbar spine (L1-L4) and distal forearm (the non-shunt arm) by DXA using a Hologic QDR-2000 (pencil-beam mode) or Hologic QRD-1000 scanner (both from Hologic, Waltham, MA, USA). The comparability of results obtained from these two different types of scanners was investigated using a phantom and the variance was found insignificant (coefficient of variation < 0.5%). For comparison of BMD in the forearm, normative data provided by the DXA manufacturer were used. Due to lack of normative data from the manufacturer on BMD in the spine and femoral neck, a control group of 291 self-reported healthy Caucasian subjects (110 males and 181 females) aged 19-79 years was used. This control group has previously been described in detail (22), but of special interest persons were excluded in case of metabolic bone disease including non-traumatic fractures, abnormal renal function (i.e. plasma creatinine values over the age- and gender-specific reference ranges recommended by the Scandinavian Society for Clinical Chemistry (23)), current or past malignancy, and furthermore, current or past treatment with glucocorticoids, bisphosphonates, or calcitonin ruled out participation.

A total of two tubes (a total of 40 mL) (BD Diagnostics, Plymouth, England) were drawn from each patient before dialysis in a fasting state within a week of the DXA scan. All analyses were performed immediately after sampling. For measurement of plasma phosphate, plasma albumin, and t-ALP lithium heparin tubes were used, and samples were spun for 7 minutes at 2000 x g. The analyses were performed on a Modular equipment (Roche Diagnostics, Basel, Switzerland) with dedicated reagents applied as recommended by the supplier. Isotype determination of alkaline phosphatases was not performed. For analysis of ionised calcium, PTH and 25-hydroxy vitamin-D blood was collected in tubes without additives, were left to clot for 1 hour and then spun as described above. Measurement of ionised calcium was performed on an ABL 735 instrument (Radiometer, Broenshoj, Denmark), while PTH analysis was measured with an electrochemiluminescence immunoassay (ECLIA) on Immulite 2000 (Siemens, Munich, Germany), using polyclonal AP-labelled capturing antibody (1-34) and a monoclonal detecting antibody (44-84). Intra- and inter-assay coefficient of variation (CV) for the PTH analysis was 2.5% and 5.8%, respectively (manufacturer’s information). Finally, 25-hydroxy vitamin-D was measured by enzyme immunoassay (IDS, Phoenix, AZ, USA) with an intra- and inter-assay CV of 5-7% (at 39-165 nmol/L) and 5-9% (at 40-132 nmol/L), respectively.

To investigate whether BMD was lower in dialysis patients than in a general population, Z-scores were calculated, as they are a more appropriate parameter than BMD values or T-scores. BMD was transformed into Z-scores using the formula:
Z-score = (observed BMD - mean BMD for age- and sex-matched healthy subjects) / SD for age- and sex-matched healthy subjects.
Changes in BMD were expressed as the annual percentage change calculated by the formula:
((BMD2-BMD1)/BMD2) x 100 / (time2-time1).
Normality was checked by inspection of scatter plots and the use of probit plots. Age was normally distributed, while PTH and duration of dialysis were log-normally distributed and non-parametrical statistics was therefore used for these parameters. Also, variance between groups was investigated using Levene’s test, which did not indicate significant differences. Co-linearity was checked using the SPSS procedure for multiple regression and in all cases tolerance was above 0.20. Differences between groups were compared using Mann-Whitney or Chi-square test as appropriate. The relationship between all parameters was investigated in a bivariate analysis using Pearson’s correlation. For multiple regression analysis we chose to enter variables with well-documented relationship with BMD (i.e. age, sex and weight), added by variables that may be modifiable or related to treatment (i.e. duration of dialysis) and finally variables potentially confounding the correlation (bone turnover). The model was built by entering age, sex, weight, dialysis type (HD/PD), duration of dialysis (ln-transformed), PTH (ln-transformed), t-ALP and glucocorticoids ever (yes/no); parameters were however only used if the r value in our bivariate analysis exceeded 0.25 for the specific BMD investigation (i.e. femoral neck, lumbar spine or forearm). P-values < 0.05 were considered significant. No corrections for multiple comparisons were made. Data are shown as median (first quartile-third quartile) unless otherwise stated. Statistical analyses were performed using SPSS ver. 17.0 (SPSS Inc, Chicago, IL, USA).

Baseline characteristics of patients and controls are shown in Table 1, while bone turnover markers are shown in Table 2. There was a higher percentage of male participants in the PD group than in the HD group (P = 0.031), and the participants in the PD group were significantly taller than those in the HD group (P = 0.007). PD patients also had alower plasma albumin compared with patients on HD (P = 0.012).
Table 1. Baseline characteristics of individuals included in the study. 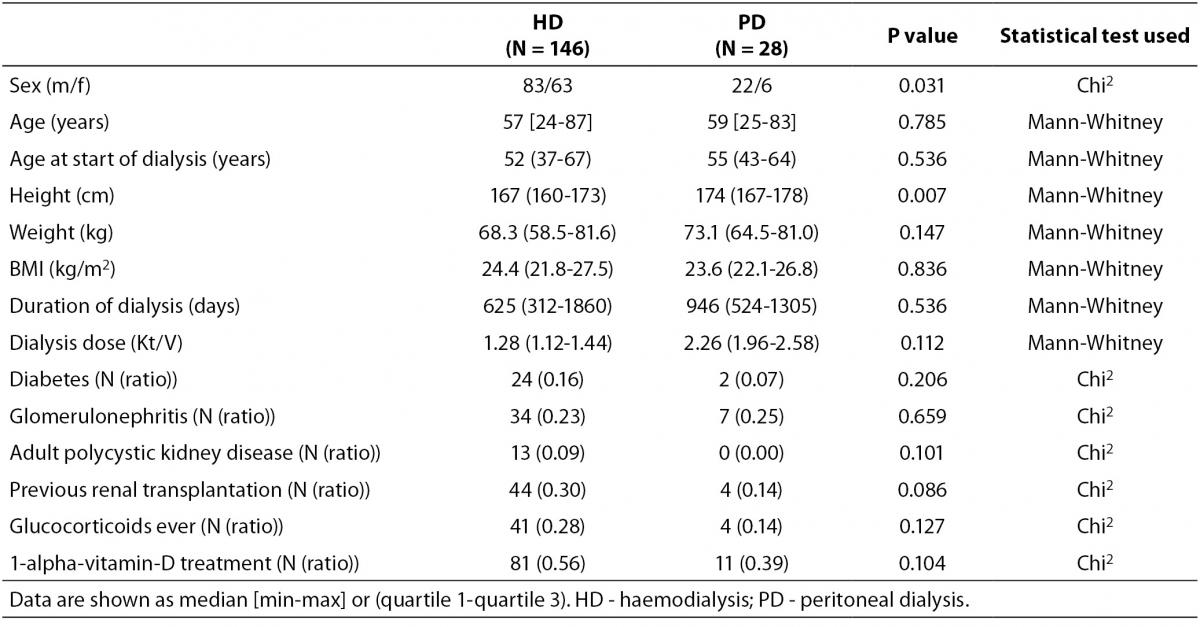 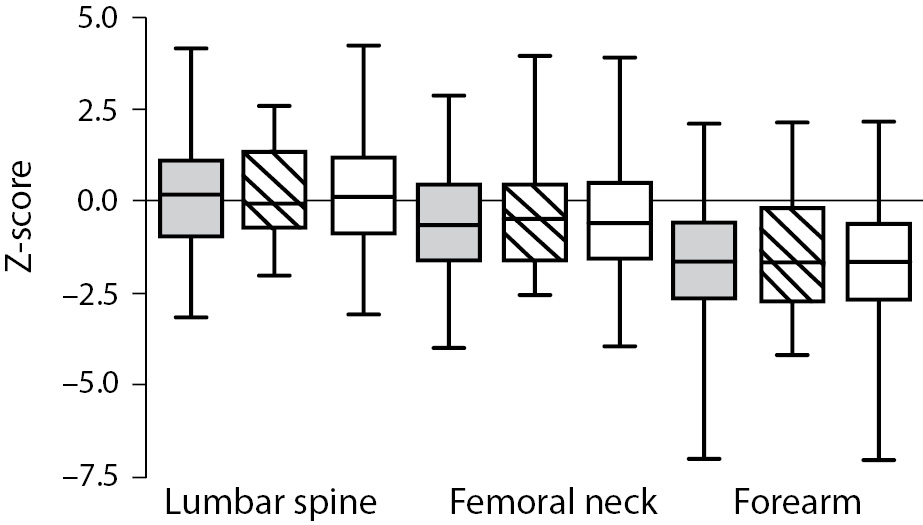 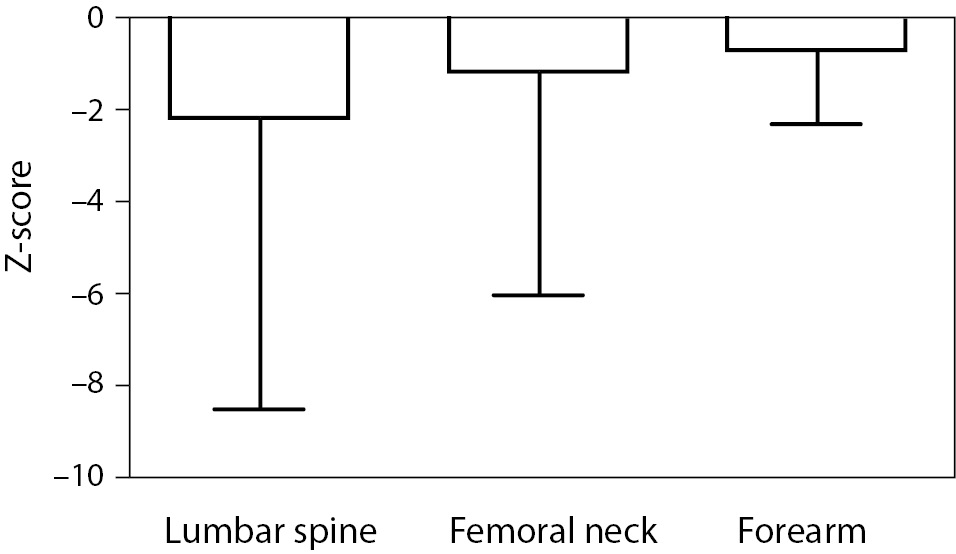 Figure 2. Change in bone mineral density Z-score over time in 73 dialysis patients after a mean period of 14 months. Data are shown as mean and SD.