Introduction: Vaspin (visceral adipose tissue-derived serpin) was first described as an insulin-sensitizing adipose tissue hormone. Recently its anti-inflammatory function has been demonstrated. Since no appropriate data is available yet, we sought to investigate the plasma concentrations of vaspin in sepsis.

Materials and methods: 57 patients in intensive care, fulfilling the ACCP/SCCM criteria for sepsis, were prospectively included in our exploratory study. The control group consisted of 48 critically ill patients, receiving intensive care after trauma or major surgery. Patients were matched by age, sex, weight and existence of diabetes before statistical analysis. Blood samples were collected on the day of diagnosis. Vaspin plasma concentrations were measured using a commercially available enzyme-linked immunosorbent assay.

Conclusion: In the sepsis group, vaspin plasma concentration was about three-fold as high as in the median surgical control group. We demonstrated a weak positive correlation between vaspin and CRP concentration, as well as with two scoring systems commonly used in intensive care settings. Although there seems to be some connection between vaspin and inflammation, its role in human sepsis needs to be evaluated further.

Sepsis is a major health care problem, responsible for approximately 10% of all intensive care unit (ICU) admissions. It is associated with long hospitalization times and poor patient outcome (1-3). Due to recent advances in training and prompt initiation of anti-microbial therapy, the mortality rates of septic shock, which were once as high as 80 percent, have been reduced to 20 to 30 percent (1,4).

Visceral adipose tissue is suspected to play a pathophysiological role in the development of systemic inflammation during sepsis. Adipocytokines are cytokines secreted by adipose tissue. A sepsis-specific profile of adipocytokines has first been reported Hillenbrand and colleagues in 2010 describing low concentration of adiponectin and high concentration of resistin (5). In another study, a correlation between these two hormones and the severity of the inflammatory response during sepsis has been demonstrated (6).

Human visceral adipose tissue–derived serpin (i.e. vaspin) is a 47 kDa protein of the serine protease inhibitor family. It has been linked with inflammation, but its exact physiological functions are not yet completely understood. Vaspin was first described as an insulin-sensitizing adipocytokine (7,8). It is considered to promote insulin secretion from pancreatic β-cells (9). Furthermore, it was also demonstrated that vaspin influences circulating levels of the adipocytokines adiponectin and resistin in rats (7). Moreover, vaspin inhibits apoptosis induced by free fatty acids in vascular endothelial cells (10) and expression of pro-inflammatory cytokines (11,12).

Since no data is yet available concerning the possible involvement of vaspin in sepsis, we sought to investigate vaspin concentration in sepsis by comparing the plasma concentrations of the adipocytokine vaspin in patients with sepsis to those of a surgical control group also admitted to the ICU.

This exploratory study was approved by the Ethics Committee of the Medical University of Vienna and is in accordance to good scientific practice and the Helsinki Declaration. We included 57 patients (35 male patients) with diagnosed sepsis admitted to our General Intensive Care Units of the Department of Anaesthesiology, General Hospital of Vienna, Vienna, Austria, over the period from July 2010 to March 2013. Sepsis, as systemic inflammatory response to infection, was diagnosed using current criteria as defined by the American College of Chest Physicians / Society of Critical Care Medicine (ACCP / SCCM) (13). At least two of the following symptoms as a result of infection need to be present to confirm sepsis diagnosis: 1) a body temperature greater than 38 °C or less than 36 °C, 2) heart rate > 90 beats per minute, 3) respiratory rate > 20 breaths per minute or arterial concentration of CO2 (pCO2) < 32 mm Hg as an indicator of hyperventilation and 4) white blood leukocyte count (WBC) > 12 x 109/ L or < 4 x 109 / L. The control group included 48 patients (37 male patients) admitted to the same ICU after major surgery (ear-nose-throat-, thoracic-, abdominal or orthopaedic surgery). These patients showed no evidence of sepsis.

All patients included were over 18 and under 90 years of age. Pregnant patients and patients suffering from chronic infectious diseases, such as viral hepatitis, HIV infection or autoimmune diseases were not included. Patients were matched by age, sex, weight and existence of diabetes mellitus.

On the day of inclusion, blood samples were obtained from each patient. 4.5 mL of venous blood was drawn and collected in a 1:10 dilution of 0.11 M trisodium citrate (BD, New Jersey, USA). Blood for samples were drawn in the course of routine clinical work. Blood was additionally taken every 24 hours for up to eight days. Due to organisational difficulties it was not possible to get samples for time series analysis from all patients. Samples were centrifuged at 3500 rpm for 15 minutes at 4 °C. The obtained plasma was stored at -80 °C for up to 1.5 years until assayed. All samples were thawed simultaneously only once.

Patient-related data such as sex, age, weight, existence of diabetes mellitus, cause of death, length of stay, WBC, concentration of C-reactive protein (CRP) and the scores of Simplified Acute Physiology Score version II (SAPS II), maximum of Sequential Organ Failure Assessment (SOFA) within the first 24 hours and Acute Physiology and Chronic Health Evaluation version II (APACHE II) scoring systems (severity of illness scoring systems commonly used in intensive care medicine) were obtained from the electronic case documentation system used at our clinic. The scoring systems used are well established for prognostic categorization of septic patients and take into account various physiological parameters such as blood pressure, body temperature, heart rate or blood electrolyte concentrations as well as overall function of specific organ systems, patient-specific risk factors such as chronic health impairments or known organ dysfunction and necessity of therapeutic intervention (14). As is usual for SOFA scoring, the maximum score within the first 24 hours after admission was taken for analysis (14).

Vaspin plasma concentration was measured using a commercially available enzyme-linked immunosorbent assay (ELISA; Vaspin (human) ELISA Kit, AdipoGen, Liestal, Switzerland). The manufacturer’s coefficient of variation (CV) was 1.31% at vaspin plasma concentrations of 0.59 ng/mL, 3.85% at 0.64 ng/mL and 3.64% at 0.71 ng/mL. Plasma samples were randomized before assaying and tested in duplicates, using a dilution of 1:5 according to the manufacturer’s specifications. The assay was performed according to the manufacturer’s manual. Photometric readings were performed using a Victor 3 Microplate Reader (Perkin Elmer, Waltham, USA).

For each continuous parameter the Shapiro-Wilks normality test was performed. Non-normally distributed parameters were described using median and interquartile range. Since this study was designed as matched case-control study, all comparisons were made using tests for paired samples. Comparison of groups (sepsis vs. control) was performed using the non-parametric Wilcoxon signed rank test, since all data were not normally distributed. Regarding categorical data, the Pearson Chi-squared test was used to compare the groups.

To equalize the characteristics (age, sex, weight, diabetes mellitus) a genetic matching algorithm was applied using the additional package for patient matching “GenMatch” (15,16) to confirm significant differences despite unequal distribution of characteristic parameters of both groups. Using this non-parametric matching method, optimal balance between groups is found using multivariate matching where a genetic search algorithm determines the weight each covariate is given. Friedman test was used to compare daily vaspin plasma concentrations in nine patients for eight continuous days.

Table 1. Study population demographic before and after matching. 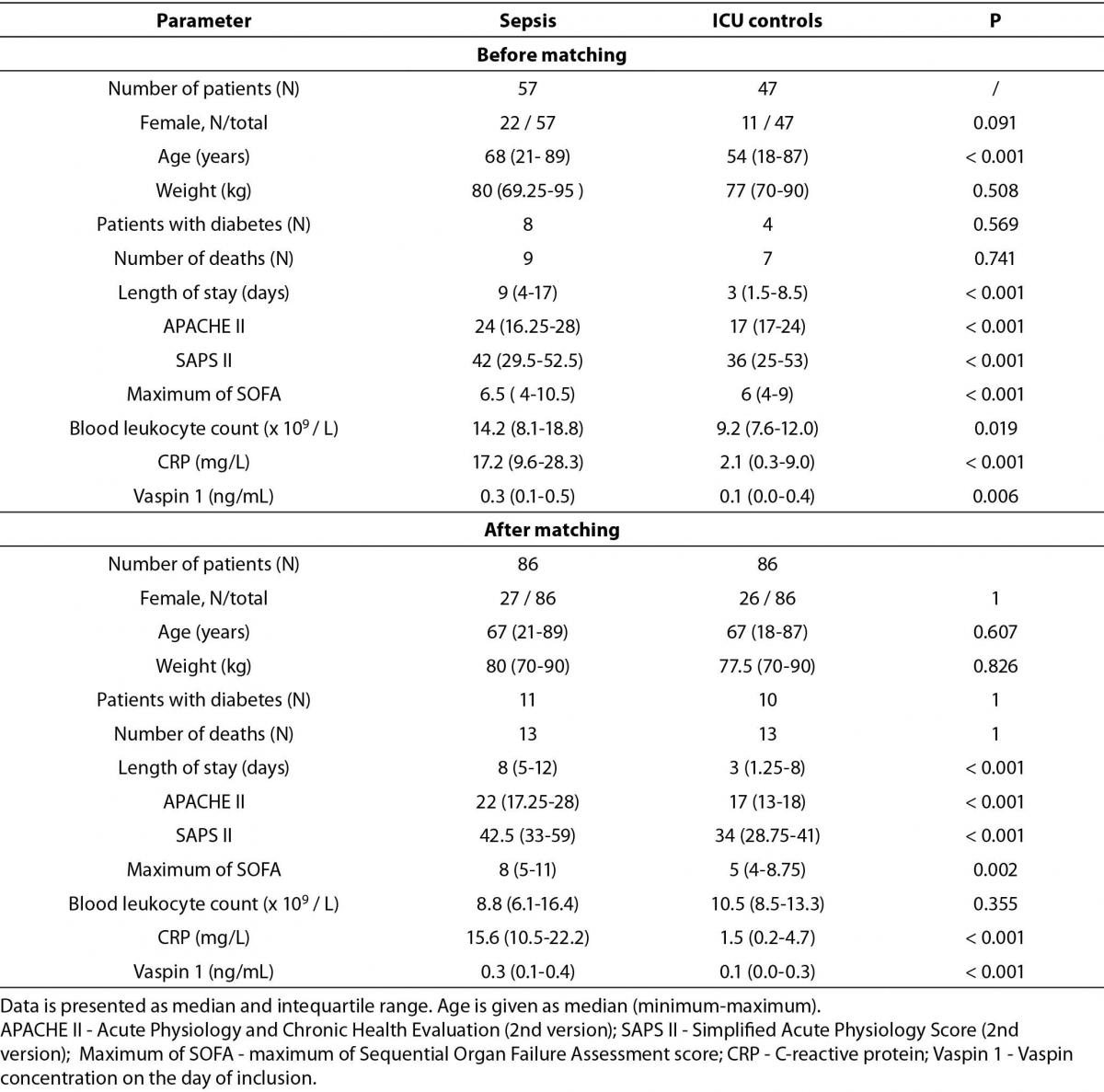 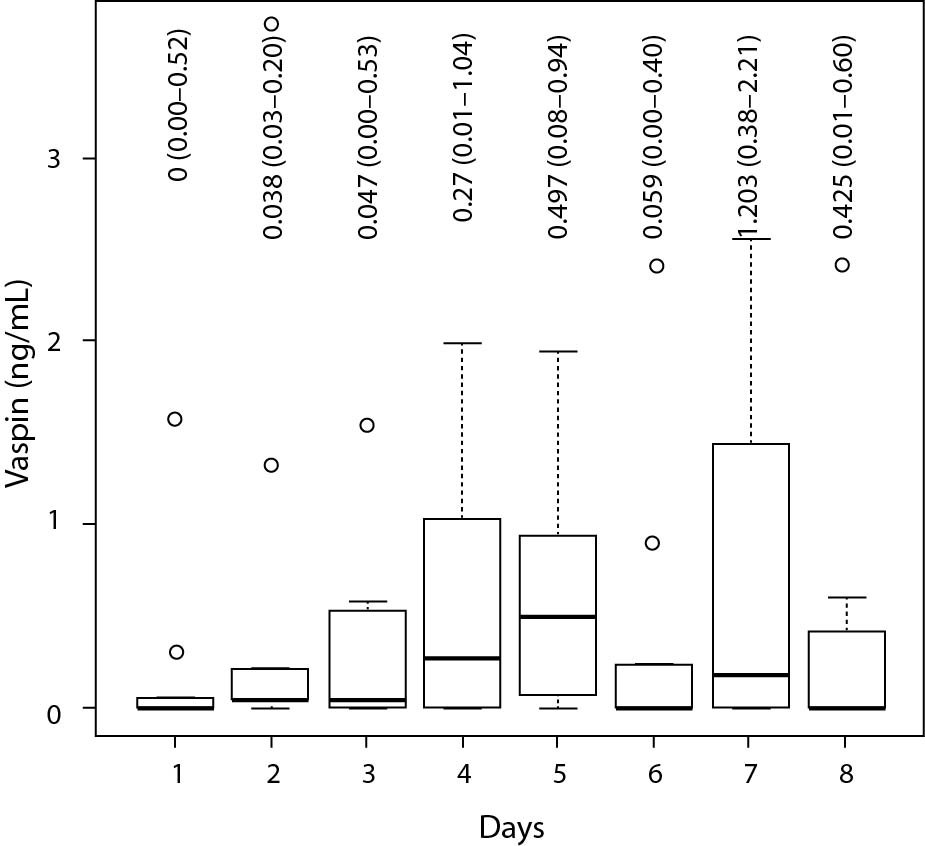 Sepsis is defined as a systemic inflammatory response syndrome to infection, where infection initiates a complex and prolonged host response, in which both pro-inflammatory and anti-inflammatory mechanisms occur. Pro-inflammatory cytokines like TNF-α, IL-1β, and IL-6 extend the inflammatory cascade, directed at eliminating invading pathogens. However, this inflammation may compromise other organ systems (2,3,17).

Recently, the visceral adipose tissue came to attention as a source of adipose-derived hormones and adipocytokines which may have a role in the development of systemic inflammatory response during sepsis (5,6,18).

Vaspin is member of the serine protease inhibitor family and is expressed in visceral adipose tissue of Otsuka Long-Evans Tokushima fatty rats in obesity, when insulin plasma concentrations are high (7). In humans, elevated vaspin concentrations are associated with obesity as well as impaired insulin sensitivity, whereas low vaspin concentration is indicative of a high level of fitness (19). The exact mechanisms how vaspin secretion influences the glucose metabolism and insulin sensitivity are not entirely understood.

We did find significantly increased vaspin plasma concentrations in septic patients as compared to the control group. However, the mechanism behind higher plasma vaspin concentration was not investigated in this study. Since vaspin also exerts anti-inflammatory properties, like the suppression of TNF-alpha (similar to the inflammatory adipocytokines leptin and resistin) (7), it would be conceivable that the increased vaspin plasma concentration is a consequence of the increase of pro-inflammatory cytokines during sepsis and therefore vaspin release belongs to the anti-inflammatory mechanisms during sepsis. Interestingly plasma vaspin also correlated with the CRP concentration in our patients. However, this correlation should be interpreted with caution, as it was weak and only available for the overall study population. These results are in contrast with our previous findings: we showed elevated plasma concentration of zonulin, a protein regulating gut wall permeability which is associated with poor insulin sensitivity, in septic patients. For zonulin however, there were no correlations between plasma concentration and biomarkers of inflammation or severity-of-illness scoring systems (20).

Vaspin, like resistin and adiponectin, correlates with the SAPS II and maximum of SOFA scoring systems during sepsis (5). We were able to demonstrate statistically significant correlations of equal strength as in the aforementioned study between concentration of vaspin and those scores in our study patients.

The present study has some limitations. Vaspin concentration was only measured in plasma. As there is limited knowledge about molecular targets, elimination or distribution of vaspin, plasma concentration may not be representative of function or quantity of vaspin in other tissues.

Since only nine patients were included for time line analysis, this sample size is too small for proper inference about the dynamics of vaspin concentrations after the first day of diagnosis of sepsis. We also state that some of our septic patients have been included in our previous study exploring zonulin plasma concentrations as a potential marker for gut wall integrity in sepsis. However, aliquoted samples were only used once. Lastly, as the recruitment of patients lasted for 1.5 years, unknown stability issues could affect the measurement of vaspin.

In conclusion, our data provide evidence that plasma vaspin concentration is significantly increased in septic patients as compared to non-septic ICU patients. Vaspin release may belong to the anti-inflammatory mechanisms during sepsis. Our results, however, warrant further larger clinical studies to elucidate vaspin’s function during sepsis, especially the role of vaspin in the monitoring of the course and severity of the disease.