Objectives: To validate the utility of both pro- and antioxidative stress markers along with erythrocyte osmotic fragility profile in preeclamptic patients compared with normal controls. The levels of nonenzymatic and enzymatic pro- and antioxidative parameters were determined and compared.
Methods: In the present study, we compared two groups of pregnant women: 27 women with severe preeclampsia and 25 normotensive healthy women as a control group. Blood levels of reduced glutathione (GSH), oxidized glutathione (GSSG), malondialdehyde (MDA), uric acid, and of antioxidant enzymatic parameters of superoxide dismutase (SOD), glutathione peroxidase (GPx), glutathione reductase (GRx) and catalase activities were determined by respective laboratory methods and compared to evaluate alterations due to preeclampsia.
Results: In preeclamptic women, the levels of the oxidative markers MDA and GSSG were increased by 33% (P = 0.001) and 19% (P = 0.001), respectively, whereas erythrocyte GSH was decreased by 20% (P = 0.001). The level of uric acid was increased by 36.5% (P < 0.001) as compared with normotensive healthy controls. An increase in osmotic fragility indicated decreased erythrocyte deformability in severe preeclampsia. During the development of preeclampsia, the antioxidant enzymes SOD, GRx and GPx lost 23.7% (P < 0.001), 21.9% (P = 0.014) and 14.5% (P = 0.109) of their activities, respectively. The only relief from oxidative stress was recorded in the catalase activity, which increased by 26.8% (P = 0.002).
Conclusions: We concluded that higher reactive oxygen species (ROS) production, decreased SOD, GRx and GPx activities, and elevated levels of MDA and GSSG along with low GSH supported the hypothesis of higher oxidative stress in preeclampsia. Only the increased catalase activity may have provided compensatory regulation in response to the increased oxidative stress. We also concluded that the increased osmotic fragility of preeclamptic red blood cells suggested a loss in their membrane integrity resulting in their shortened life span.

Preeclampsia is a complex multisystem disorder that is associated with hypertension, edema and proteinuria during pregnancy. An adaptive mechanism enhancing the maternal antioxidant defense system to counteract the effect of free radicals through enzymatic induction as well as through nonenzymatic free radical protectors and scavengers like reduced glutathione can prevent the occurrence of oxidative stress. However, pregnancy is a state where this adaptation may be easily disrupted.
Consensus does not exist whether the activities of the antioxidant enzymes superoxide dismutase (SOD), glutathione peroxidase (GPx) and catalase increase or decrease in preeclampsia. Several authors have reported a decrease in the activity of SOD, GPx and GRx (1-4), whereas others found their activities to increase (5-7). Similarly, the activity of catalase has been reported to increase (1,8), or suggested to decrease in preeclampsia (9).
Our laboratory has for long been involved in pursuing studies on pathological blood. Considering the contradictory reports and the seriousness of preeclampsia, the present study was carried out to determine the activities of catalase, SOD, GPx and glutathione reductase (GRx) in the blood of normal and severely preeclamptic women, along with the levels of malondialdehyde (MDA) and oxidized glutathione/reduced glutathione (GSSG/GSH) to collectively evaluate the alteration in pro-oxidant and antioxidant balance.
Literature reveals very little information on preeclamptic erythrocyte osmotic fragility, and this parameter is also important to assess the pathophysiological status of preeclampsia. There is a report on decreased GSH content in red blood cells of preeclamptic women, which has been correlated to the increased osmotic fragility and consequently reduced cellular deformability and membrane fluidity (10). Thus, we also included this parameter in our study, which yielded very interesting results.

In India, pregnant women are encouraged to attend regular antenatal check ups. Standard antenatal care is defined as monthly visits up to 28 weeks, fortnightly until 34 weeks, and weekly visits thereafter. The present study was carried out with prior approval from the local Ethics Committee. The study included pregnant women with normal blood pressure as a control group and preeclamptic women admitted to our hospital that had been or had not been under regular care and also those referred from private sectors or primary health centers. Twenty-five normal pregnant women and 27 severely preeclamptic patients with term pregnancy were selected. They gave their consent in writing and the objectives of the study were fully explained to them in detail prior to taking consent. Body height and weight of the subjects were measured to calculate their body mass index (BMI). Clinical examination and history taking excluded women addicted to tobacco, patients with diabetes, ischemic heart disease, a history of stroke, kidney diseases or other conditions of known free radical etiology. The criteria for dividing women into normal primipara and preeclamptic primipara groups were set at a blood pressure of 140/90 mm Hg or higher, proteinuria and edema.

Determination of osmotic fragility (OF)

Osmotic fragility (OF) experiments were performed following the method of Dacie and Lewis (11).The NaCl concentration of 50% hemolysis was taken as a measure of mean erythrocyte fragility (MEF). Color measurement was made using Systronics colorimeter.
Blood samples were centrifuged at 1000xg for 15 min at 4 °C and isolated red cells were washed 4–5 times with 0.154 M NaCl to remove plasma and buffy coat. After final wash, the required packed red cells were lysed by hypotonic shock and different dilutions were used as hemolysates.
Hemoglobin content of the erythrocyte was measured by cyanmethemoglobin method of Drabkin (12).

Packed red cells (0.2 mL) were used in the assay. GSH was made to react with 5’5-dithiobis(2-nitrobenzoic acid), which reacts with sulfhydryl groups, to develop a stable color. The absorbance was measured at 412 nm and GSH content expressed as μmol/gHb (13).

Erythrocyte lysate was deproteinized with 0.5M HClO4. Then estimation was made on the basis of reduction of GSSG in the presence of NADPH and glutathione reductase (GRx), and decrease of NADPH at 340 nm after initiating the reaction by adding GRx was taken as an index of GSSG content, which was evaluated and expressed as μmol/gHb (14).

GPx activity was measured spectrophotometrically (17) at 340 nm in 50 mM phosphate, 5 mM EDTA, pH 7.0 containing 0.3 mM NADPH, 0.3 U/mL GRx, 5 mM GSH, 4 mM sodium azide, 75 μM H2O2 and 10 μL of erythrocyte lysate in a final reaction mixture of 3 mL. The hemolysate was pretreated with Drabkin’s reagent to produce stable cyanmethemoglobin, eliminating methemoglobin-reductase-mediated (or nonenzymatic) oxidation of NADPH. One unit of GPx was considered to be the amount necessary to oxidize 1 μmol NADPH/min. The activity was expressed as U/gHb.

Catalase decomposes H2O2 and forms water and molecular oxygen. H2O2 absorbs maximum light at 240 nm. The absorbance decreases as H2O2 is being decomposed by catalase. Determination of catalase activity was assayed by monitoring the rate of H2O2 decomposition spectrophotometrically at 240 nm following the procedure of Aebi (18). The assay mixture contained 0.9 mL of 1M Tris, 5 mM EDTA buffer, pH 7.0 and 0.1 mL of the sample. The reaction was started by adding 1.0 mL of 200 mM hydrogen peroxide (H2O2) in the test cuvette and by adding the same volume of distilled water instead of hydrogen peroxide in the reference cuvette. The decrease in absorbance was measured with a recorder at an interval of 30 seconds for 3 minutes. The value of absorbance of the reference cuvette was subtracted from that of the test cuvette before calculating the units of activity. The activity of catalase was evaluated and expressed as kU/gHb. 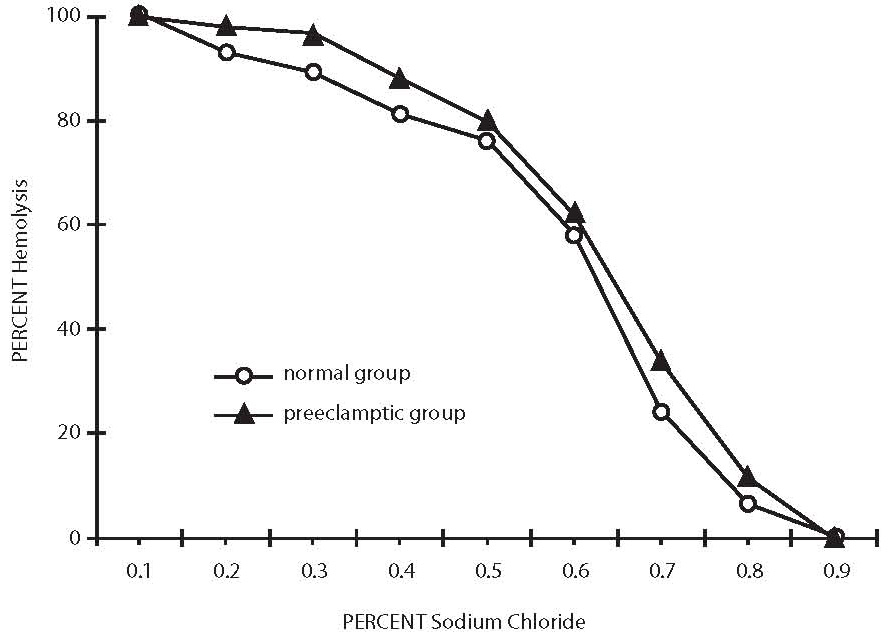 Alterations in the enzymatic antioxidant status

We evaluated the quantum of enzymatic antioxidant defense both in normal and severely preeclamptic women, and found much variation in their profiles (Table 3). The antioxidant enzymes (SOD, GRx and GPx) showed a decrease in their activities in preeclamptic women as compared with normal women, indicating the loss in their antioxidant capacity, whereas a significant increase in catalase activity showed its compensating regulatory role in response to the increased oxidative stress.
Table 3. Activities of various antioxidant enzymes in control and severe preeclampsia subjects

We are highly grateful to those patients of our hospital who volunteered to donate their blood when needed for this project. The authors would also like to thank the paramedical staff of this hospital for their assistance in collection and storage of blood samples.