Introduction: Measurement and monitoring of blood glucose levels in hospitalized patients with portable glucose meters (PGMs) is performed widely and is an essential part of diabetes monitoring, despite the increasing evidence of several interferences which can negatively bias the accuracy of measurements. The purpose of this study was to evaluate the effect of the hematocrit on the analytical performances of different PGMs as compared with a reference laboratory assay.
Materials and methods:The effect of various hematocrit values (~0.20, ~0.45 and ~0.63 L/L) were assessed in three whole blood specimens with different glucose concentration (~1.1, ~13.3, and ~25 mmol/L) by using six different commercial PGMs. The identical samples were also tested with the laboratory reference assay (i.e., hexokinase). The percentage difference from the laboratory assay (%Diff) was calculated as follows: % Diff = average PGM value - value from laboratory assay x 100 / value from laboratory assay.
Results: The %Diff of the six different PGMs were rather broad, and comprised between 56.5% and -34.8% in the sample with low glucose concentration (č1.1 mmol/L), between 40% and -32% in the sample with high glucose concentration (~13.3 mmol/L), and between –50% and 15% in the sample with very high glucose concentration (~25 mmol/L), respectively. It is also noteworthy that a very high hematocrit value (up to 0.63 L/L) generated a remarkable negative bias in blood glucose (-35%) as measured with the laboratory assay, when compared with the reference sample (hematocrit 0.45 L/L).
Conclusion: The results of this analytical evaluation clearly confirm that hematocrit produces a strong and almost unpredictable bias on PGMs performances, which is mainly dependent on the different type of devices. As such, the healthcare staff and the patients must be aware of this limitation, especially in the presence of extreme hematocrit levels, when plasma glucose assessment with the reference laboratory technique might be advisable.

The chronic hyperglycaemia of diabetes mellitus is associated with long-term organ dysfunction and increased risk of complications such as cardiovascular disease, renal failure, retinal and neurological diseases (1). Regular monitoring of blood glucose along with appropriate pharmacological treatment are effective to improve the glycaemic control and thereby decrease the burden of long term complications of hyperglycaemia (2). In agreement with the current position of the American Diabetes Association (ADA), self-monitoring of blood glucose (SMBG) is recommended for all patient undergoing insulin therapy (3). In particular, ADA suggests that SMBG should be used in patients on intensive insulin therapy, in patients not in pharmacological treatment but in diet therapy alone to achieve an optimal glycaemia control, and to achieve the optimal postprandial glycaemic target (4). The National Academy of Clinical Biochemistry (NACB) also recommends that SMBG should be made available to all diabetic patients on insulin therapy (5). Portable glucose meters (PGMs) are widely used by patients for home testing, and despite these devices are fast and easy to use, the patients must be trained on the correct handling. Moreover, PGMs are currently used in other clinical settings, including departments of acute and chronic care (hospital, clinics) as well as internal medical wards to monitor hypoglycaemic therapy in diabetics and patients with acute myocardial infarction. In internal medicine wards, PGMs are used directly by the healthcare staff, which should be appropriately trained to their use and maintenance, so that the risk of improper application can be eliminated or limited at least. Nevertheless, some variables can affect the efficacy of glucose monitoring by PGM also in this setting, including the hematocrit level, hypoxemia, hypotension, hypertriglyceridemia, temperature and humidity of the environment (6). The purpose of this study was to evaluate the interference of the hematocrit on the analytical performances of different PGMs as compared with the laboratory measurement.

To evaluate the effect of hematocrit on reliability of PGM test result, three different hematocrit levels (0.22, 0.45 and 0.62 L/L) were studied. Three levels of glucose (target ranges as č20 mg/dL, č240 mg/dL and č450 mg/dL; i.e., č1.1 mmol/L; č13.3 mmol/L and č25 mmol/L) were assessed. We obtained discarded venous blood collected in heparin tubes without separator gel (Venosafe, Terumo Europe, Leuven, Belgium) from healthy donors. Assuming that samples with very low glucose concentrations are not easily available, these were obtained by collecting the blood the day before the evaluation and maintained the whole anticoagulated blood on a rocker to allow consumption of glucose. We ensured the blood was saturated with oxygen by opening the tubes. Afterwards, a glucose stock solution (Concentration 20 g/dL) supplied by Nova Biomedical Corporation (Waltham, CA, USA)(i.e., the addition of 7.5 μL of glucose spiking solution to a 1 mL whole blood sample increases the glucose concentration by 8.3 mmol/L) was spiked into each blood collection tube to obtain the target glucose ranges andthe blood tubes were then placed on blood tubes rocker for 10 minutes to allow adequate mixing.

The initial hematocrit of the stock blood (i.e., 0.469 L/L) was assessed on a hematological analyzer (Coulter LH750 Analyser, Beckman Coulter, Fullerton, CA, USA). In our laboratory the reference interval of hematocrit values are 0.37-0.47 L/L for females and 0.42-0.52 L/L for males, respectively. Three aliquots of 1 mL samples were thereby prepared (labelled as A1, A2, A3) by adding fixed amount of packed red blood cells and plasma to achieve final hematocrit concentrations in the tubes as follows: A1: 0.22; A2: 0.45; A3: 0.62 L/L. The tubes were then placed on tube rocker for 10 minutes and glucose was tested afterwards with six PGMs and, after centrifugation of the samples (then minutes at 3500 rpm), by the reference laboratory assay (i.e., hexokinase, Olympus AU 2700, Beckman Coulter, Fullerton, CA, USA). Table 1 shows the main characteristics of the PGMs used in this study (Accu-Chek Compact Plus Roche Diagnostics GmbH, Mannheim, Germany; Breeze2 Bayer, Basel, Switzerland; One touch Vita, Life Scan Inc., Milpitas, CA, USA; Optium Xceed Abbott Diabetes Care, Oxon, UK; Ratisbonne BGM, Acon Laboratories Inc. San Diego, CA, USA; Stat-Strip Xpress Nova Biomedical, Waltham,CA, USA). Only one test strip lot was used for each PGMs. The PGMs and the laboratory assay were all calibrated according to manufacturer’s instruction. All the measurements were performed simultaneously (within 10 min) in duplicate by two skilled laboratory technologists.
Table 1. Characteristic of the GPMs used in this study.

The results of this investigation are shown in figures 1, 2 and 3 and in tables 2, 3 and 4. At low glucose concentration (~1.1 mmol/L) the %Diff from the value obtained by the laboratory method are comprised between 56.5% and -34.8%. Among the different PGMs, the Stat-Strip Xpress shows the best performance in comparison with the reference laboratory assay (%Diff between -4.3 and +8.7). It is however noteworthy that the bias of some PGMs (as compared with the reference laboratory assay) at normal hematocrit level and very low glucose concentration was broad and clinically meaningful (Figure 1). 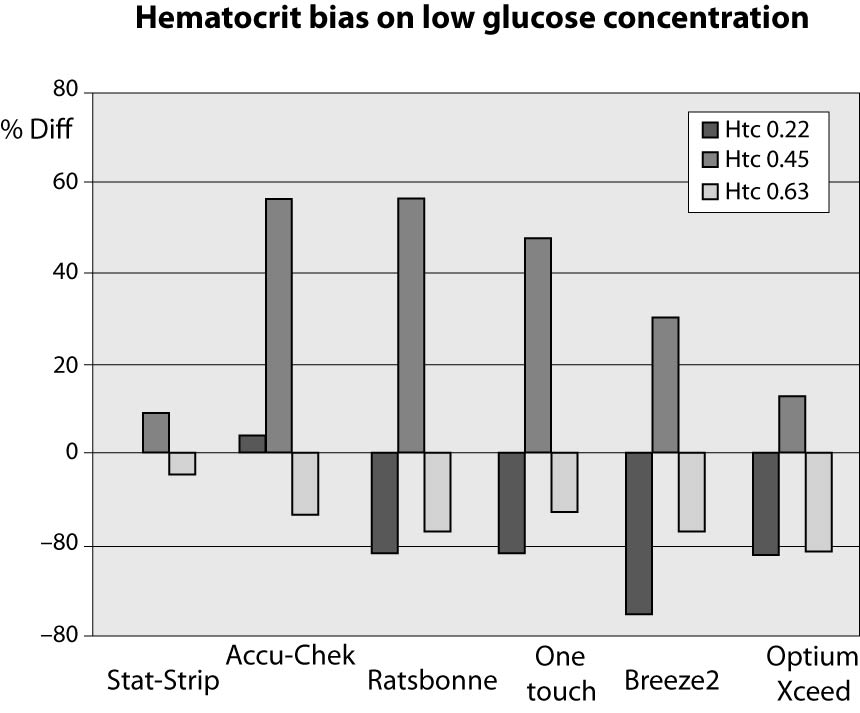 Figure 1. %Diff from laboratory method at different hematocrit levels (0.22, 0.45 and 0.63 L/L) in the sample with very low glucose concentration (~1.1 mmol/L).
At high glucose concentration (~13.3 mmol/L) the %Diff were comprised between -32% and +40%. In such case, the modest performance by PGMs is conceivably attributable to the effect of high levels of hematocrit. Interestingly, the observed bias of PGMs was mostly negative (i.e., from -32% to -17%), with the only exception of the Ratisbonne (+40%). The Stat-Strip Xpress and the Accu-Chek showed the best performance in comparison with the laboratory assay (Figure 2). 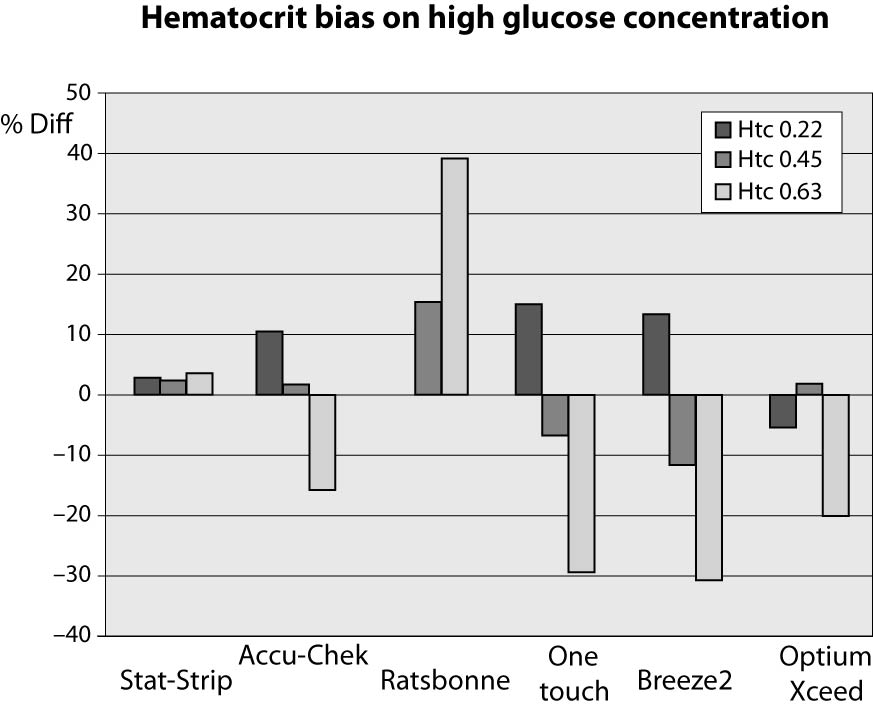 Preanalytical variability and analytical quality both have a strong influence on the reliability of laboratory testing, on common laboratory assays (7-11) and point of care testing (POCT) (12).
The revised Clinical and Laboratory Standards Institute (CLSI, the former National Committee for Clinical Laboratory Standards) guidelines (9), and further adopted by the International Organization for Standardization (ISO), recommend that less than 5% of the samples should have a bias of ± 0.83 mmol/L (for glucose concentrations < 4.2 mmolL), or within ± 20% (for glucose concentrations > 4.2 mmol/L), when compared with the reference laboratory assay. Therefore the results of this analytical investigation confirm that the hematocrit value can substantially bias glucose measurements on PGMs and reference laboratory assay, producing a bias that largely exceed the quality requirements established by the CLSI and which can thereby be considered clinically significant. Noteworthy, the hematocrit bias appeared extremely heterogeneous and mostly unpredictable among the different PGMs, with differences as high as 40%. This finding has substantial clinical implication for both the clinical decision making and the therapeutic management, especially in subjects who are characterized by unusually high or low hematocrit values, such as newborns and critically ill patients, respectively. In particular, we have shown that this bias is also evident in samples with very low glucose levels (i.e., č1.1 mmol/L) as compared with the reference laboratory technique (Figure 1). Recently Roth-Kleiner report that before daily use in the newborn population, careful clinical evaluation of each new POCT system for glucose measurement is of utmost importance, concluding that the bench analyzer ABL 735 was the most accurate system, being however characterized by an important drawback (i.e., the blood volume needed is more than 15 times higher than for handheld PGMs) (13). So, the users of PGMs (both the healthcare personnel and the patients) must be aware of this limitation and, as recommended by Tang et al. (14), we suggest that clinicians must interpret with great caution the results obtained with PGMs in patients with abnormal (especially very high or very low) hematocrit levels. In these circumstances, the measurement of plasma glucose using the laboratory technique might be advisable.
Although the mechanism underlying the preanalytical interference of hematocrit has not been fully established, it has however been suggested that the presence of an increased number of red blood cells might (mechanically) prevent the diffusion of plasma through the layers of the test strips, thereby decreasing the volume of plasma available for the enzymatic reaction (6). This interference has been eliminated in some PGMs that measure hematocrit along with glucose in the drop of blood, operating a further correction of test results (15). Some authors have also developed a simple mathematical correction formula for some commonly used PGMs used in the United States that is effective to reduce, as claimed by the authors, the inaccuracy caused by anemia (16,17). More recently, Hoedemaekers et al. failed to observe an effect of hematocrit on the accuracy of PGMs performance in critically ill patients (18).

We would like to thank the technical staff (Maria Gabriella Groppo, Nadia Trevisan and Sara Negrisolo) for their collaborative work.