Glycogen phosphorylase isoenzyme BB in the diagnosis of acute myocardial infarction: a meta-analysis

Background: Early diagnosis is crucial for management of patients with suspected acute myocardial infarction (AMI). Among innovative and promising biomarkers, the recent interest raised on glycogen phosphorylase isoenzyme BB (GPBB) has prompted us to perform a meta-analysis of published studies.
Materials and methods: A systematic electronic search was carried out on PubMed, Web of Science and Google Scholar, with no date restriction, to retrieve all articles that have investigated the early diagnostic performance of GPBB in patients with suspected AMI, and directly reported or allowed calculation of sensitivity and specificity. A meta-analysis of the reported sensitivity and specificity of each study and pooled area under the curve (AUC) was then performed by random effect approach. Heterogeneity was assessed by I-square statistics.
Results: Eight studies were finally selected for analysis (941 subjects; 506 cases and 435 controls), with a high heterogeneity (I-squared, 86.3%). The resulting pooled estimates and 95% confidence interval were 0.854 (0.801-0.891) for sensitivity, 0.767 (0.713-0.815) for specificity, 0.826 (0.774-0.870) for negative predictive value, 0.802 (0.754-0.844) for positive predictive value, and 0.754 (0.602-0.907) for AUC. In those studies that have simultaneously assessed GPBB and a troponin immunoassay, the combination of these biomarkers did not significantly improve the performance of troponin alone.
Conclusion: GPBB does not meet the current requirements for an efficient diagnosis of AMI when used as a stand-alone test, whereas its combination with troponin merits further investigation in larger trials.

Acute myocardial infarction (AMI) is the most disabling and deadly disease in western countries, causing ~15% of all deaths in the United States, according to the recent statistics of the American Heart Association (1). An early diagnosis (i.e., within 3 to 6 hours from onset of the symptoms) and an efficient risk stratification are crucial for management of patients with suspected acute coronary syndrome, since effective myocardium salvage is only achieved when revascularization is established within 6 hours from onset of the symptoms. An efficient triage is also essential to face the constant overcrowding of emergency departments (EDs), which inherently causes inadequate quality of care and patient distress (2). Beyond consolidated use of troponin testing, which is the biochemical gold standard in the diagnostic approach of patients with suspected AMI, there is spasmodic research on additional biomarkers that would enable fast and appropriate triage of patients in the ED, as well as in the coronary care unit (CCU) (3,4). Among innovative and promising biomarkers of AMI, the development of commercial immunoassays has contributed to renew the interest on glycogen phosphorylase isoenzyme BB (GPBB).
GPBB is a fundamental enzyme in the regulation of carbohydrate metabolism by mobilization of glycogen. Three different isoenzymes exist; glycogen phosphorylase isoenzyme MM (GPMM) is prevalently contained in human skeletal muscle, glycogen phosphorylase isoenzyme LL (GPLL) is contained in liver and all other tissues except heart, skeletal muscle, and brain, whereas GPBB is predominantly produced by brain and heart, wherein the 94 kD monomer is present in comparable tissue concentration (5). A serum increase of GPBB should hence be highly specific for myocardial injury when damage to the brain and consequent perturbation of blood-brain barrier has been ruled out.
The very first evidence of GPBB testing in patients with AMI was provided more than 25 years ago by Rabitzsch et al., who showed that this biomarker is rapidly released into the circulation in the early phase of AMI (6,7). These preliminary findings paved the way to a series of further trials. In a recent article published in this journal, Cubranic et al. concluded that GPBB may contribute to early diagnosis of ischemic heart disease, with sensitivity of 0.97 and specificity of 0.81 in patients with AMI admitted within 3 hours from onset of the symptoms (8). These interesting results prompted us to perform a meta-analysis of published studies that have assessed the diagnostic performance of GPBB in patients with suspected AMI.

We carried out a systematic electronic search on the three most accessed scientific databases (i.e., PubMed, Web of Science and Google Scholar) (9), with no date restriction, to retrieve all articles that have investigated the early diagnostic performance (i.e., within 6 hours from the onset of the symptoms) of GPBB in trials with a sample size of not less than 20 patients with suspected AMI. The following keywords were used: “myocardial infarction” or “ischaemic heart disease” “or “acute coronary syndrome”, in combination with “glycogen phosphorylase isoenzyme BB” or “GPBB” or “GP-BB”. The bibliographic references of the articles published in English, French, Spanish and Italian were reviewed for additional relevant studies. All the articles identified according to these search criteria were systematically assessed for quality by two authors (GL and GC), according to the Quality Assessment of Diagnostic Accuracy Studies (QUADAS) checklist criteria (10). Disagreements were resolved by a third opinion (CM). After careful reading of abstract and text, only articles directly reporting or allowing calculation on a 2×2 contingency table of sensitivity and specificity according to accuracy data in combination with prevalence and sample size were deemed eligible for meta-analysis. When multiple time points were available, we limited the extraction to data of the earliest sampling (i.e., within 6 hours). Abstracts, review articles, and/or lecture presentations, as well as articles that were not fulfilling the aforementioned criteria were discarded. The number of patients with a true-positive, false-positive, false-negative and true-negative test results of GPBB in patients with suspected AMI was extracted, along with information on assays used and cohort enrolled.

The electronic search according to the above mentioned criteria identified 45 citations of studies and abstracts after elimination of replicates among the three searchable databases. Thirty six studies were excluded after abstract and/or full text reading because GPBB was not assessed in the setting of AMI diagnostics. The remaining nine studies were carefully assessed for quality after revision of the full text, and one was excluded because it did not contain sufficient information for calculating either the pooled AUC, or the pooled estimates of sensitivity and specificity. Inter-rater reliability was excellent (k = 0.93; P < 0.001).
Overall, eight studies were finally selected for analysis, all containing complete data for calculating the pooled AUC, whereas only seven provided sufficient information for calculating the cumulative sensitivity, specificity, NPV and PPV (Table 1) (8,12-18). The eight studies (mean quality score, 10.3) totaled 941 subjects (506 AMI cases and 435 controls). The between-study variation was high and attributable to heterogeneity (chi-squared, 58.40; DF, 8; I-squared, 86.3%; P < 0.001). In 5 out of 8 studies (62%) the setting was the ED, whereas patients were directly admitted to the CCU in two studies, and to the intensive care unit in one trial. GPBB was assayed with the Diacordon® GPBB–ELISA test (Diagenics, Woburn, MA, USA) in six studies, whereas it was measured with Evidence® Cardiac Panel (RANDOX Laboratories Ltd., United Kingdom) and in-house developed immunoassay in the remainders. The diagnostic threshold of GPBB was comparable across the studies, being comprised between 7 and 10 μg/L. The diagnostic performances of the eight studies as well as the pooled data are shown in Table 1. The pooled estimates and 95% confidence intervals were 0.854 (0.801-0.891) for sensitivity, 0.767 (0.713-0.815) for specificity, 0.826 (0.774-0.870) for NPV and 0.802 (0.754-0.844) for PPV. The AUCs of the eight single studies as well as the pooled AUC (0.754 [0.602-0.907]) are shown in Figure 1. 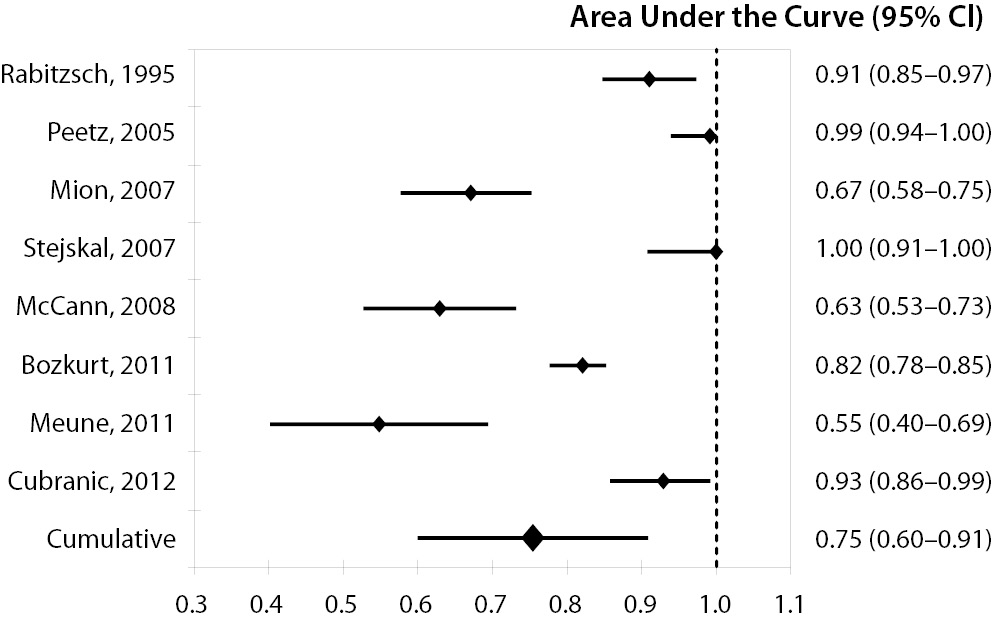 Figure 1. Diagnostic performance of glycogen phosphorylase isoenzyme BB (GPBB) for diagnosis of acute myocardial infarction (AMI).
Area under the receiver operating characteristic (ROC) curve (AUC) of the eight studies included in the meta-analysis and cumulative AUC, pooled and weighted for sample size of the studies.

Only a few reliable studies have been published so far on the potential role of GPBB as a stand-alone test in the triage approach of patients with suspected ischaemic heart disease. Although the outcome of some of these was promising, showing excellent values of sensitivity and specificity, the results of others were instead disappointing (Table 1). Regardless of the broad heterogeneity that we found across the studies included in this meta-analysis, our results clearly attest that the diagnostic performance of GPBB are much lower than those of the current high-sensitive immunoassays, which are typically characterized by AUCs of ~0.96, sensitivity greater than 0.85, NPV greater than 0.99 and specificity values comprised between 0.80 and 0.93 (19). No one of the pooled estimates of GPBB outweighed or even approximated these excellent diagnostic performances. The lowest estimate of GPBB was obtained for specificity, but this is not surprising inasmuch as the concentration of this biomarker is influenced by skeletal muscle injury, as clearly shown by Lippi et al. who reported a significant post-exercise GPBB increase of ~40% after a 21-km run in trained athletes (20). The assessment of the article of Figiel et al., which had been originally excluded from our meta-analysis due to the lack of a reference group which did not allow to gather information on specificity and AUC, also revealed a poor sensitivity (i.e., 0.47) of GPBB in 20 patients with AMI, in whom the biomarker had been assessed < 3 hours from the onset of the symptoms (21). It is noteworthy, however, the four studies that enrolled the patients within 1 to 3 hours from the onset of chest pain showed a much better sensitivity (0.96-1.0) than the remainders, and this is attributable to early release of GPBB due to burst in glycogenolysis and a concomitant increase in plasma membrane permeability that both occur immediately after myocardial ischemia (5).
Table 1. Studies that have assessed the diagnostic performance of glycogen phosphorylase isoenzyme BB (GPBB) for diagnosis of acute myocardial infarction (AMI). 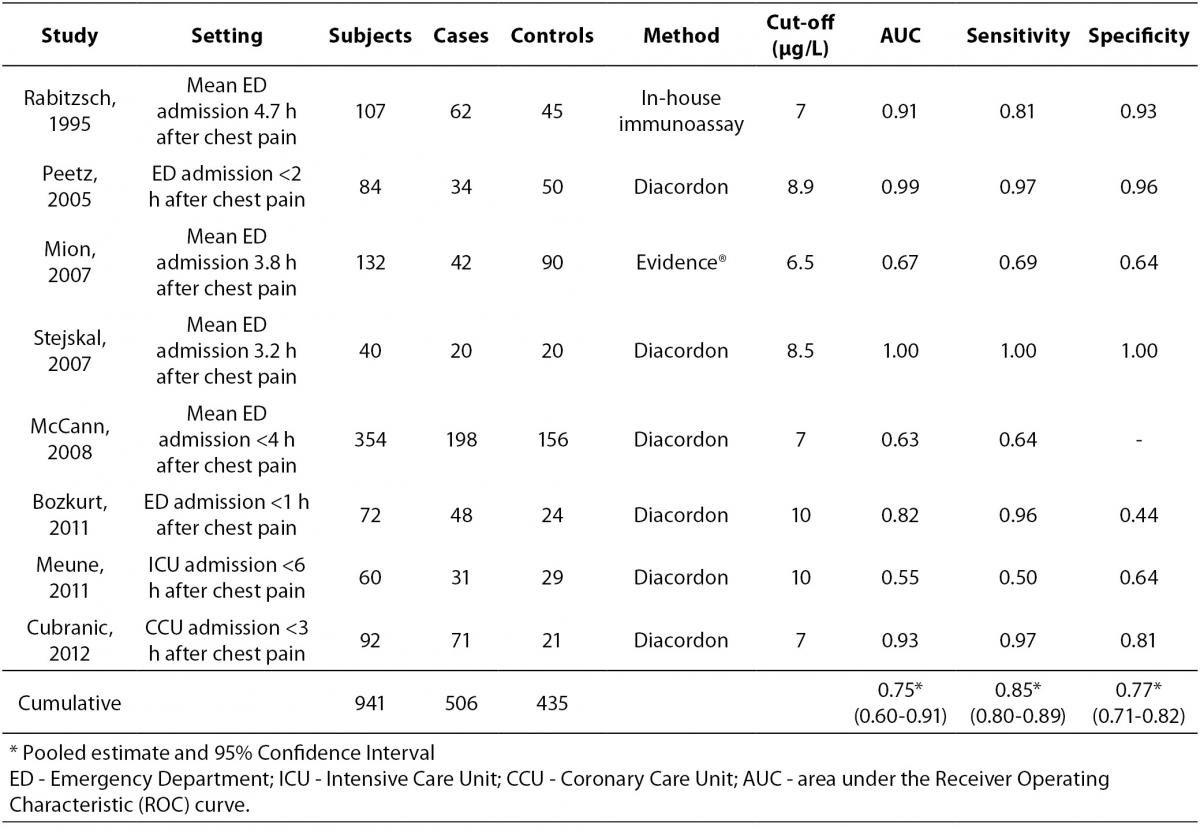 In those studies that have simultaneously assessed GPBB and a troponin immunoassay (14,16,18), their combination (either marker positive) did not significantly improve the performance of troponin alone. For example, Meune et al. reported an AUC of 0.842 for troponin alone versus 0.854 for the combination (P = 0.728) (18). Even more interestingly, in the study of Mion et al., the diagnostic efficacy of troponin alone was even greater than that combining troponin and GPBB (83.3 versus 69.7%) (14). We thereby conclude that GPBB does not met the current requirements for an efficient diagnosis of AMI when used as a stand-alone test, whereas its combination with troponin merits further investigation in larger trials.