Introduction: Zonulin is a eukaryotic protein structurally similar to Vibrio cholerae’s zonula occludens toxin. It plays an important role in the opening of small intestine tight junctions. The loss of gut wall integrity during sepsis might be pivotal and has been described in various experimental as well as human studies. Increased levels of zonulin could be demonstrated in diseases associated with increased intestinal inflammation, such as celiac disease and type 1 diabetes. We therefore investigated the role of plasma levels of zonulin in patients with sepsis as a non-invasive marker of gut wall integrity.
Materials and methods: Plasma level of zonulin was measured in 25 patients with sepsis, severe sepsis or septic shock according to ACCP/SCCM criteria at the first day of diagnosed sepsis. 18 non-septic post-surgical ICU-patients and 20 healthy volunteers served as control. Plasma levels were determined by using commercially available ELISA kit. Data are given as median and interquartile range (IQR).
Results: Significantly higher plasma concentration of zonulin were found in the sepsis group: 6.61 ng/mL (IQR 3.51-9.46), as compared to the to the post-surgical control group: 3.40 ng/mL (IQR 2.14-5.70) (P = 0.025), as well as to the healthy group: 3.55 ng/mL (IQR 3.14-4.14) (P = 0.008).
Conclusion: We were able demonstrate elevated levels of plasma zonulin, a potential marker of intestinal permeability in septic patients. Increased zonulin may serve as an additional mechanism for the observed increased intestinal permeability during sepsis and SIRS.

Despite some progress in the last decade, sepsis and sequential multiple organ failure/dysfunction syndrome (MOF/MODS) correlate with poor clinical outcome and the mortality of patients suffering from severe sepsis or septic shock is still unacceptably high (1). The gut is thought to play a pivotal role in the development of the systemic inflammatory response syndrome (SIRS) (2). There is ample evidence for a dysfunction of the intestinal barrier function in critically ill patients, compromised epithelial tight junctions leading to increased permeability and persistent release of inflammatory cytokines. Pro-inflammatory mediators from the intestine, therefore may extend the inflammatory cascade compromising other organs (3,4).
Proper functioning of tight junctions is crucial to maintain normal physiologic processes in the intestinal tract. The tight junction is considered as a narrow band, which is made up of several strands wrapping around the circumference of the apical portion of the intestinal epithelial cells. There is a correlation between the number of these strands and the tightness of the junction (3,5). Proteins associated with tight junctions are the membrane-associated, guanylate kinase–like proteins ZO-1, ZO-2, and ZO-3 as well as the integral membrane proteins occludin and claudin (3,6).
Human zonulin is a ≈47-kDa protein that increases intestinal permeability in epithelia of the small intestine; it is the eukaryotic counterpart of the Vibrio cholerae zonula occludens toxin (7). Zonulin is the only physiological mediator known, which increases intestinal permeability by reversibly modulating the intercellular tight junctions. Increased plasma zonulin levels have been described in celiac disease, type 1 diabetes as well as obesity-associated insulin resistance (8-10).
Although zonulin’s role as potent modulator of intestinal permeability in health and disease is well defined, its exact physiologic function however is still incompletely understood (11). Furthermore, there is no description of zonulin’s participation in states of grave acute inflammation like sepsis.
Circulating plasma zonulin has been suggested as potential marker of intestinal permeability (9,12). Increased intestinal permeability during sepsis and SIRS has been described in various animal models as well as human studies (3,4). We hypothesized those patients suffering from sepsis exhibit elevated plasma zonulin levels as compared to healthy controls. Furthermore we studied the correlation of plasma zonulin to various clinical parameters.

A blood sample was obtained from each patient and control. 4.5 mL venous blood were collected in a 1:10 dilution of 0.11 M trisodium citrate and well mixed. After blood draw, samples were centrifuged at 3500 x g for 15 minutes at 4 °C to extract plasma afterwards. For analysis plasma was snap frozen and stored at -80 °C until assayed. If there was no reason for exclusion, blood was drawn within 12 hours after the diagnosis of sepsis in the sepsis group, and additionally every 24 hours for up to eight days. In the post-surgical control group blood draw was taken out within 12 hours after admission to the ICU. In the healthy group blood was taken once after food abstinence of at least 6 hours.
For quantitative assessment of the plasma levels of zonulin a commercial enzyme-linked immunosorbent assay (ELISA, Zonulin ELISA Kit, Immundiagnostik, Bensheim, Germany) was used; according to the manufacturer’s instructions, coefficient of variation (CV) was 0.6-15.0%. Plasma samples were randomized before running the tests. The assay was performed according to manufacturer’s manual; tests were carried out in duplicates. Photometry was executed with Victor 3 Microplate Reader (Perkin Elmer, Waltham, USA).

Comparisons between two groups were determined by unpaired t-test with Welch’s correction. A two-tailed P < 0.05 was used as statistically level of significance. According to the Bonferroni adjustment for multiple comparisons, an individual P < 0.025 was necessary to reach statistical significance at the 5% level.Three or more independent groups were analysed with Kruskal-Wallis ANOVA. For correlation of zonulin plasma levels and laboratory parameters Spearman’s rank correlation coefficient was used. Data are given as median and interquartile range (IQR). All data were calculated with GraphPad Prism Version 5.01, GraphPad Software, Inc. 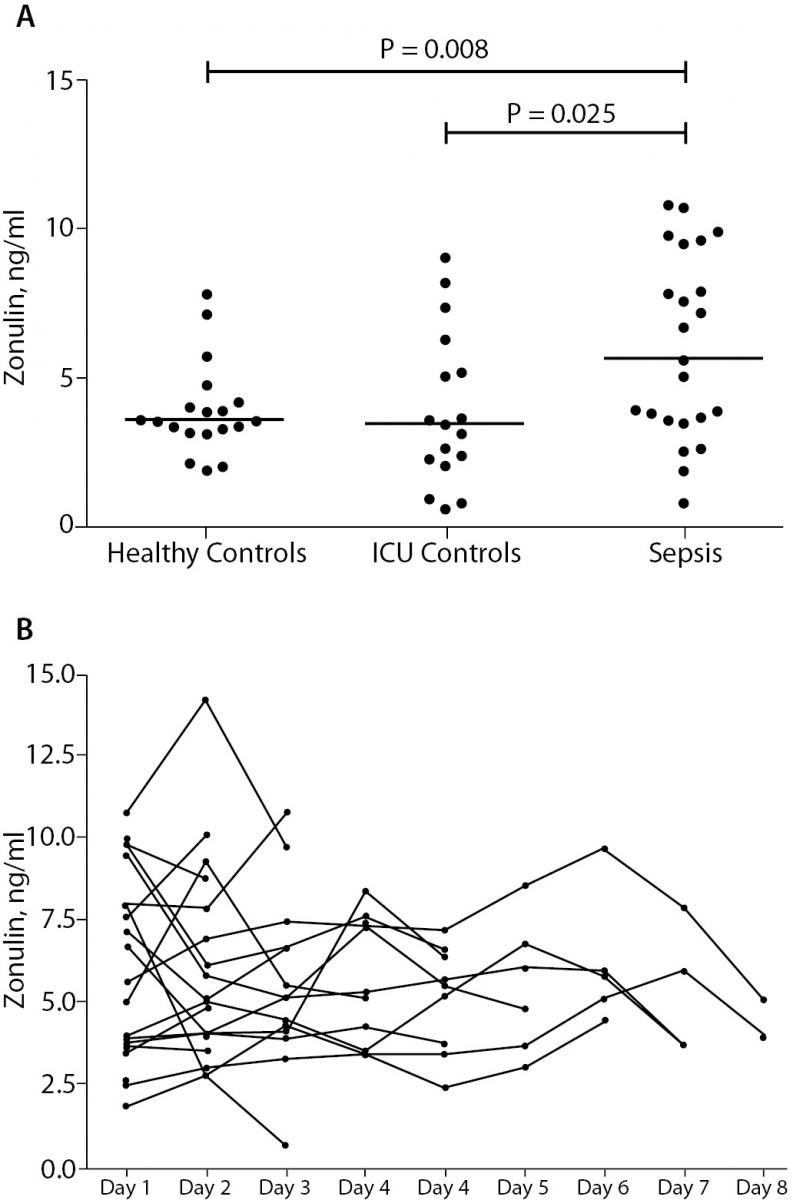 Our data show higher levels of plasma zonulin in patients with sepsis as compared to non-septic patients, as well as healthy controls. The data of individual subjects with lower plasma concentrations of zonulin in the sepsis group are partially overlapping with those in the ICU control and the healthy control group. No significant decrease of plasma zonulin could be observed during the first days after begin of the sepsis. Moreover, no correlation of plasma zonulin and mortality as well as other clinical parameters was found. Interestingly we did no observe a difference between sepsis from abdominal causes and non-abdominal sepsis.
The increase in paracellular intestinal permeability has been clearly demonstrated in critically ill patients during a variety of clinical conditions such as severe burns, trauma as well as sepsis (14-16). The resulting translocation of bacteria and toxins has been suggested to augment of systemic inflammation and cause distant organ dysfunction leading to MOF/MODS during sepsis and SIRS (17).
Zonulin is well known to alter the intestinal barrier function by modulation of the intercellular tight junctions. Most likely zonulin does reversibly alter tight junction integrity, through modification of the actin filament regulatory protein PKCα, like its prokaryotic equivalent the Vibrio cholerae zonula occludens toxin (8,11,18). Zonulin has been studied as marker for increased intestinal permeability in other disease entities like type I diabetes or obesity-associated insulin resistance (9-10), which are also characterized by high circulating levels of pro-inflammatory cytokines like sepsis (19). The increased levels of plasma zonulin, therefore may be the consequence of the proinflammatory cytokine milieu during sepsis and SIRS. In this context it is also of note, that we were unable to find a difference between sepsis from abdominal causes and non-abdominal sepsis. Moreover, plasma zonulin levels remained elevated for days after the diagnosis of sepsis. It is therefore conceivable, that in addition to other discussed mechanisms like for example gastrointestinal mucosal microcirculatory perfusion deficits, zonulin may play a role in the origin of altered gut wall integrity during sepsis and SIRS.
Macrophages play a key role in the release of zonulin and the consecutive decrease in intestinal barrier function. In celiac disease gliadin induces a MyD88 dependent activation of intestinal macrophages with a subsequent release of the zonulin by the epithelial cells. Moreover bacterial exposure has been shown to cause zonulin secretion in the intestine (20-22). The presence of activated macrophages in the intestine during sepsis and SIRS is well established (23,24), and may be a possible explanation for the increased plasma zonulin levels during sepsis.
Our small pilot study is however limited through the sparse data available on half time, metabolism and especially clearance of zonulin, also the concentration of zonulin in the intestinal lumen has not been studied. We were also not able to demonstrate a statistically significant correlation between plasma zonulin and mortality as well as other clinical parameters.

In conclusion we provide evidence for elevated plasma zonulin levels during sepsis as compared to healthy controls. Increased zonulin may serve as an additional mechanism for the observed increased intestinal permeability during sepsis and SIRS. Our study warrants larger clinical trials for the meaning of zonulin and sepsis.