Von Willebrand factor (vWF) is a multimeric glycoprotein that plays a major role in the primary hemostatic process. It is synthesized in endothelial cells and megakaryocytes, and secreted as ultra-large vWF (ULvWF). vWF multimers are formed within the endoplasmic reticulum and secreted into the plasma primarily by endothelial cells where additional processing occurs (1). At sites of vascular injury, vWF induces platelet adhesion and aggregation (2). ULvWF are very active and must be processed. This occurs on the surface of endothelial cells by ADAMTS13, a specific metalloproteinase belonging to the ADAMTS (a disintegrin and metalloprotease with trombospondin type 1 repeats) family (3). ADAMTS13 regulates the size of vWF and is therefore crucial for its normal physiological activity. In the case of ADAMTS13 deficiency, vWF forms large multimers in the plasma, which spontaneously bind platelets and induce aggregation (4,5). A deficiency in ADAMTS13 activity has been implicated in the development of thrombotic thrombocytopenic purpura (TTP). The congenital form of TTP is caused by a mutation in the ADAMTS13 gene, while autoantibodies diminish ADAMTS13 activity in the acquired form. The activity of ADAMTS13 in TTP patients is severally deficient, being less than 5% of normal plasma activity (6,7).
Laboratory results are associated with a certain degree of variation, mainly due to analytical and biological variations. In automated and standardized test systems, the analytical variation is often much lower than the biological variation. Biological variation has two main components: within-subject variability, which is the result of the variability in the same subject over time, and between-subject variability, which due to heterogeneous physiology among subjects (8). For accurate interpretation of patient vWF and ADAMTS13 test results, the biological variation associated with these assays must be determined. In the present study, we aimed to investigate the biological variation of ADAMTS13 antigenicity and activity for the first time. We also measured the biological variations of vWF antigenicity and activity which have shown heterogeneity in the results in earlier studies (8-11). Additionally, the reference change value (RCV) and index of individuality (II) for both vWF and ADAMTS13 antigenicity and activity were calculated.

This study was conducted at the Acibadem Labmed Clinical Laboratories in Istanbul, Turkey. The study protocol was approved by the Ethical Committee of Acibadem University. All participants signed informed consent. A total of 19 subjects (10 male, 9 female) with a mean age of 30 years (range 21–40) were recruited to estimate the biological variations of vWF and ADAMTS13 antigenicity and activity. Different number of samples were used for vWF (19 samples) and ADAMTS13 antigenicity (16 samples) and activity (15 samples). The subjects were apparently healthy and did not have a history of bleeding disorders, pregnancy, drug abuse or medical prescription.

Fasting venous blood samples were collected weekly between 8 and 10 am on the same day for 5 consecutive weeks. All subjects were in a sitting position, and 2 mL of blood samples were collected (in BD Vacutainer tube, containing Na3-citrate as anticoagulant, Plymouth, UK) after 10 min of rest by a single phlebotomist. All blood samples were transported to the laboratory under identical conditions in terms of temperature and elapsed time. All samples were centrifuged at 1500 ´ g for 10 min and the plasma was aliquoted and stored at -80 ºC until analysis. ADAMTS13 antigenicity and activity were determined using ELISA methods as described by the manufacturer (Technoclone GmbH, Vienna, Austria). According to the data given by the manufacturer, the detection limit of the ADAMTS13 antigenicity assay was 0.02 µg/mL, while that of the activity assay was 0.2%. The vWF antigenicity was determined by an immunoturbidimetric method (Diagnostica Stago, Asnieres sur Seine, France). vWF activity was determined using the ristocetin cofactor assay (RICOF) with optical-turbidimetric detection (CHRONO-LOG Lumi Aggregometer, PA, USA). We used the same lot of reagents. According to the data given by the manufacturer, the detection limits of vWF antigenicity and activity were both 1.0%. For internal quality control (QC), we routinely use commercially available QC samples to calculate the analytical variation (CVA) of high and low level of ADAMTS13/vWF antigenicity and activity. The result of internal QC data was within acceptable range. Due to matrix problem, we preferred patients’ samples instead of commercially available QC samples. For each method, we selected a patient plasma sample randomly and measured the tests several times in the same run to calculate within-run CVA.

Table 2. Biological variation, RCV and II for each test. 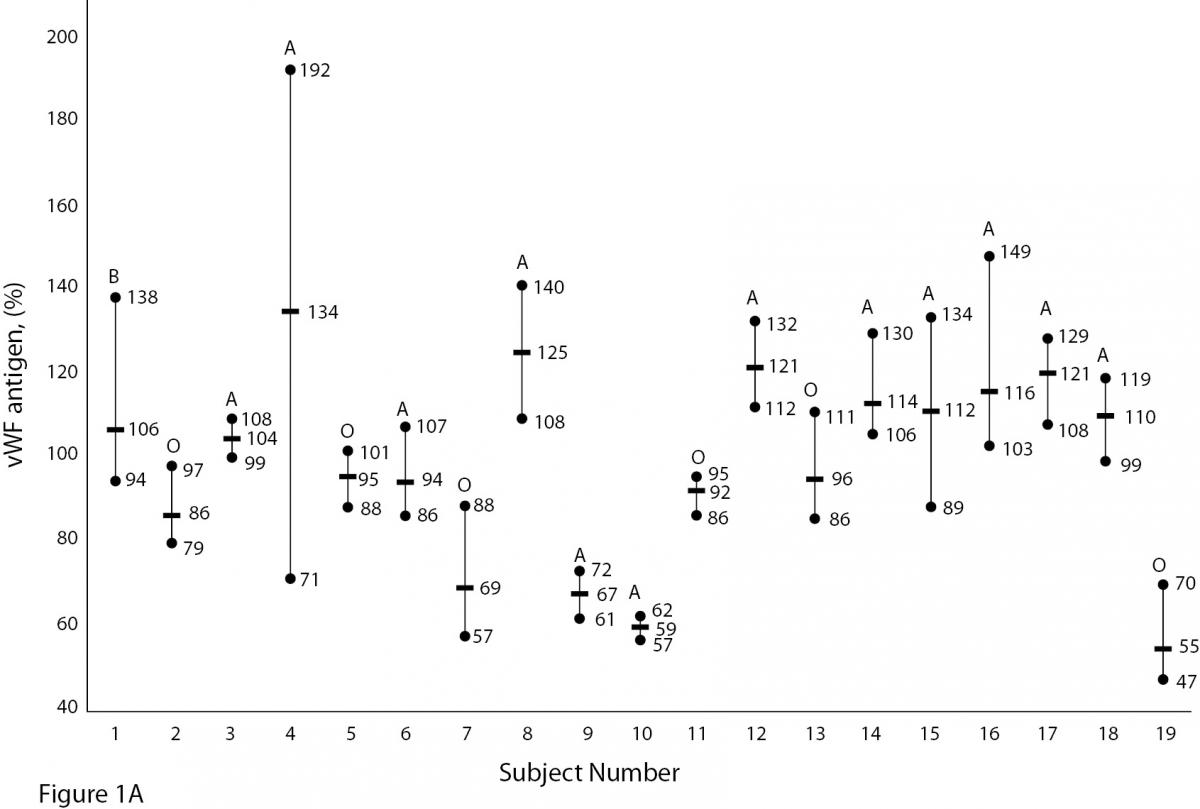 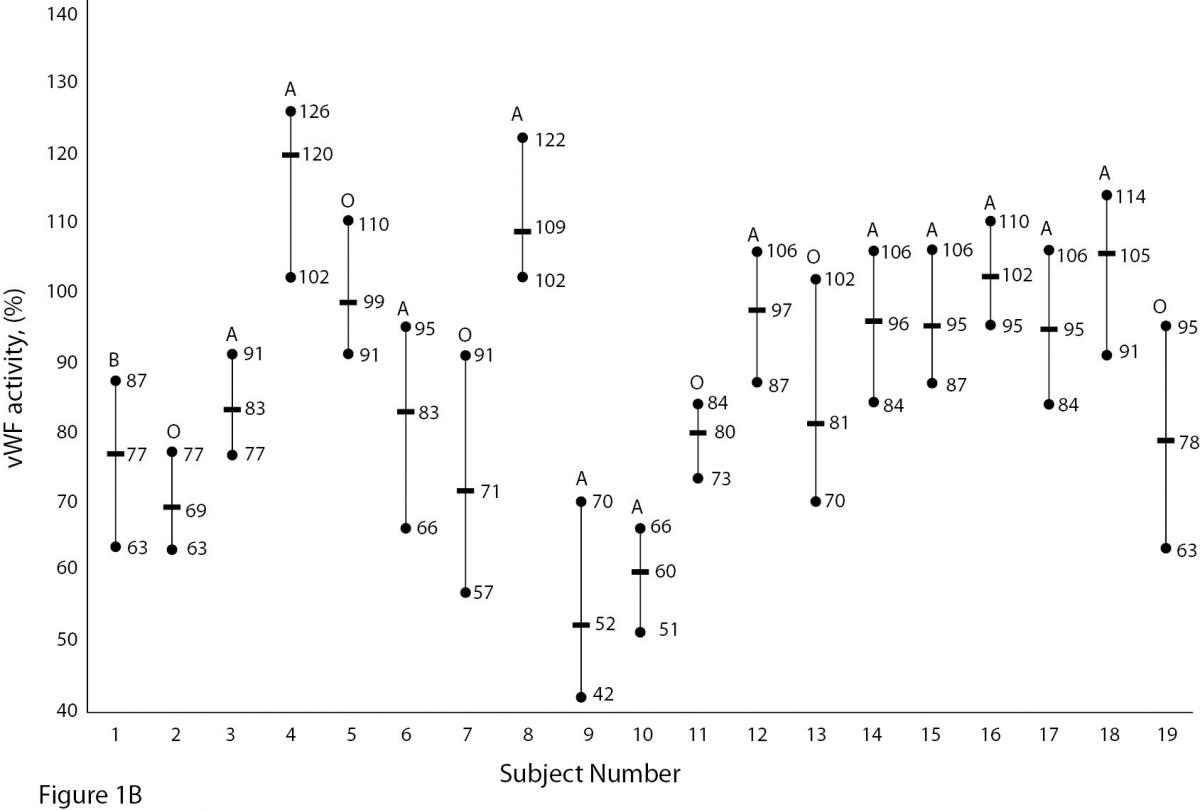 Figure 1A and B. The mean and absolute range of vWF antigen and activity in human adults (1-10: men; 10-19: women). The subjects in Figure A and B have been denoted by the same number on the X-axis. 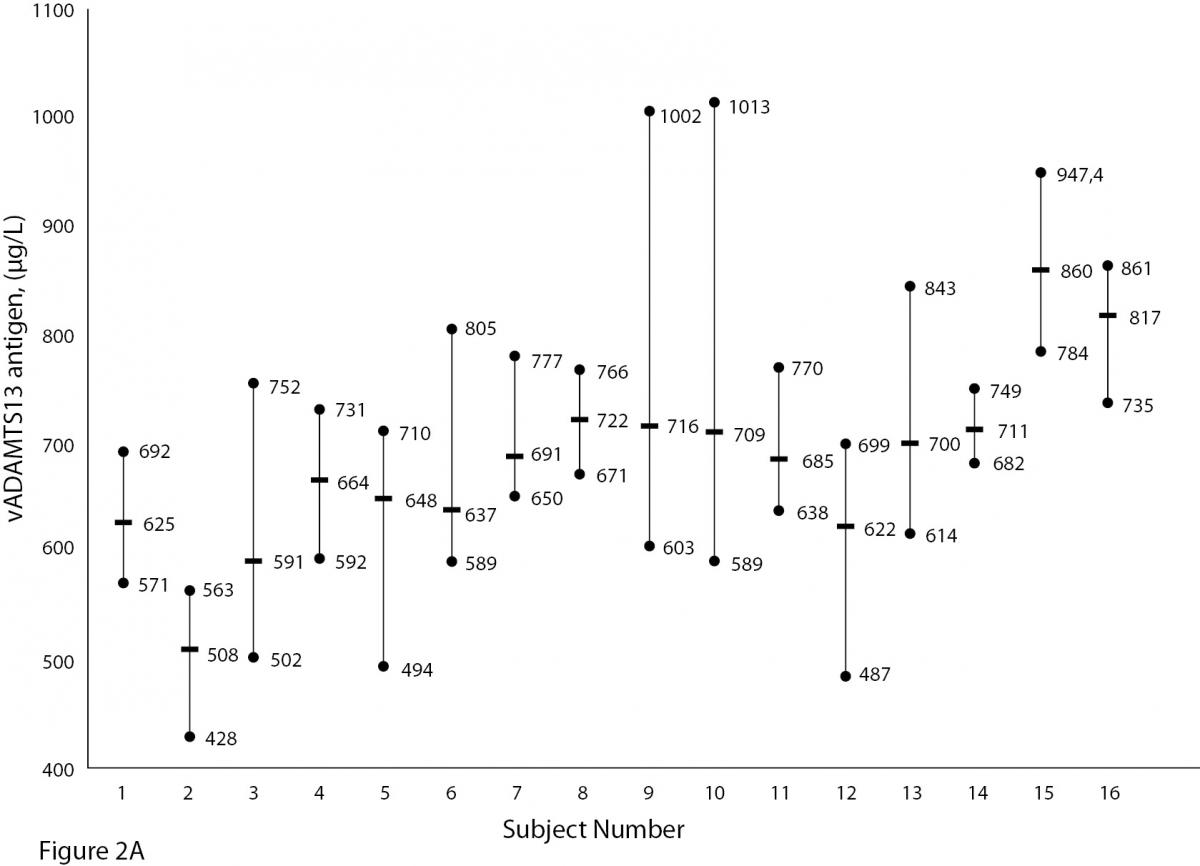 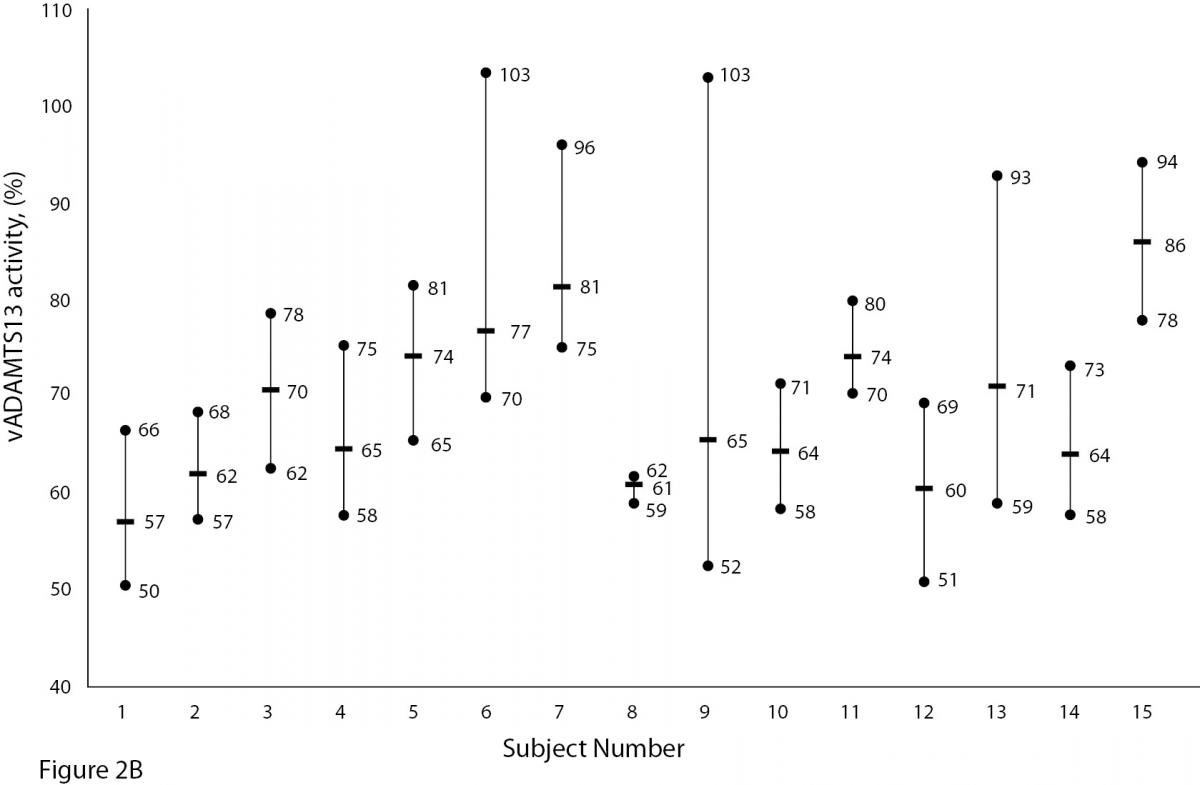