Introduction: Sample type recommended by the manufacturer for the digoxin Abbott assay is either serum collected in glass tubes or plasma (sodium heparin, lithium heparin, citrate, EDTA or oxalate as anticoagulant) collected in plastic tubes. In our hospital samples are collected in plastic tubes. Our hypothesis was that the serum sample collected in plastic serum tube can be used interchangeably with plasma sample for measurement of digoxin concentration. Our aim was verification of plastic serum tubes for determination of digoxin concentration.
Materials and methods: Concentration of digoxin was determined simultaneously in 26 venous blood plasma (plastic Vacuette, LH Lithium heparin) and serum (plastic Vacuette, Z Serum Clot activator; both Greiner Bio-One GmbH, Kremsmünster, Austria) samples, on Abbott AxSYM analyzer using the original Abbott Digoxin III assay (Abbott, Wiesbaden, Germany). Tube comparability was assessed using the Passing Bablok regression and Bland-Altman plot.
Results: Serum and plasma digoxin concentrations are comparable. Passing Bablok intercept (0.08 [95% CI = -0.10 to 0.20]) and slope (0.99 [95% CI = 0.92 to 1.11]) showed there is no constant or proportional error.
Conclusion: Blood samples drawn in plastic serum tubes and plastic plasma tubes can be interchangeably used for determination of digoxin concentration.

Digoxin is one of the most prescribed drugs in treatment of patients with diagnosis of cardiac heart failure and certain types of cardiac arrhythmias. It has narrow therapeutic range and its determination represents valuable tool for efficient management of patients (1). Reliable information on digoxin concentration is necessary for patients from the emergency department suspected for taking toxic concentration of digoxin or patients who need dosage adjustment (2).
Selection of plasma as sample type has advantages and disadvantages when therapeutic drug monitoring is concerned. Advantages of plasma in relation to serum are reduced risk of haemolysis and sample volume and disadvantage is related to dilution and interfering effect of anticoagulant (3). Manufacturers of the test kits for therapeutic drug monitoring usually recommend various sample types dependent of the drug tested, leaving the decision on the most suitable sample in particular setting to the laboratory manager. Serum test tubes containing separator gel generally should be avoided in therapeutic drug monitoring because of its influence on the tested drug (4). Only 25% of the digoxin concentration is protein-bound. Measurement of fraction of free digoxin concentration is needed when immunoreactive digoxin-like substances are present or digoxin-intoxicated patients are treated with digibind (5).
Automated processing of the patient samples ensures reliable results. Nevertheless, preanalytical phase of the total processing of the sample is still weak point (6). Many efforts are taken for improvement and quality assurance from the number of industrial representatives, as well as international expert working groups (7).
In last two decades, blood collection device manufacturers switched from glass to plastic tube production (8,9). In the package insert for the reagent for determination of digoxin concentration (Digoxin III, Ref. 6L07, Abbott, Wiesbaden, Germany) manufacturer recommends serum collected in glass serum tubes or plasma (sodium heparin, lithium heparin, citrate, EDTA or oxalate) collected in plastic tubes as sample type convenient for digoxin assay. In our daily practice we use plastic tubes. We wanted to investigate the comparability of digoxin concentration in plastic serum and heparinized plasma tubes respecting the guidelines for tube verification (10).
Our hypothesis was that the serum sample collected in plastic serum tube can be used interchangeably with plasma sample for measurement of digoxin concentration. Our aim was verification of plastic serum tubes for determination of digoxin concentration.

Specimen collection was performed on hospital wards of Medical School University Hospital Sestre Milosrdnice in the period from 18th April to 4th June of 2013. Only patients for whom digoxin analysis was routinely requested on that day were recruited into study. Venous plasma and serum samples from plastic tubes drawn from 28 patients were analysed for concentration of digoxin. For two patients concentrations of digoxin were excluded from data analysis, one because of results below the lower limit of the measurement range, and other because of the specific error code which demands additional pre-treatment of the sample. Occasionally specific error codes occur during analysis, for which manufacturer recommends using one or both pre-treatment procedures for the sample. These pre-treatments are manual dilution of the sample with original Calibrator A (digoxin = 0 nmol/L) and centrifuging of the specimen. After recommended procedure is performed, result within measurement range is obtained. Out of the total number of patients included in the study (N = 26), thirteen patients were from Emergency department, nine from Cardiology department, two were outpatients from University Department of Chemistry and single samples were obtained from Hemato-oncological and Pulmology department, respectively. Blood sampling was done in the morning. For patients from the hospital wards, timing of sampling was defined by physician and for laboratory outpatients sampling was performed after fasting in the period of 7.30-9.00 a.m.
For each patient one additional tube was drawn. Venous blood samples were taken to serum (Vacuette®Z Serum Clot Activator, 4 mL, Ref. 454204, Greiner Bio-One GmbH, Kremsmünster, Austria) and then to plasma plastic tubes (Vacuette® LH Lithium Heparin, 4,5 mL Ref. 454049, Greiner Bio-One GmbH, Kremsmünster, Austria) in a single venipuncture respecting the order of blood draw (11). The study complies with the ethical principles of the Declaration of Helsinki.

Data were presented as median and interquartile range. Wilcoxon test for paired samples non-normally distributed was used for assessment of significance of difference between data sets. Mean bias between serum and plasma tubes were calculated and compared with the acceptable % root mean standard deviation according to RiliBÄK of 14% (12). Passing and Bablok regression analysis and Bland-Altman plot were performed according to the guidelines (10,13). On the horizontal axis were results of the digoxin concentration from plasma tube and on the vertical axis were results from serum tube. Proportional and constant errors were assessed by means of Passing and Bablok regression equation and relation of mean values to the difference between measurements by the Bland-Altman plot. For data analysis MedCalc statistical software version 12.1.4.0 (MedCalc software, Mariakerke, Belgium) was used. P-value < 0.05 was considered statistically significant.

In total, twenty-six paired patient data were analysed. Median digoxin concentrations and respective mean bias are shown in Table 1. The mean bias did not exceed the method quality specifications for total allowable error. Wilcoxon test for paired samples was used for data analysis and result for significance level was P = 0.025. Although statistical difference was found, mean bias was within limits for acceptable % root mean standard deviation according to RiliBÄK.
Table 1. Calculated bias for digoxin concentrations measured in serum and plasma.

Lowest concentration of digoxin concentration obtained was 0.62 nmol/L, and the highest value was 4.44 nmol/L, covering the assay measurement range. Data analysis using Passing and Bablok regression (Figure 1) showed the absence of bias and proportional differences. Intercept and slope were 0.08 (95% CI = -0,10 to 0.20) and 0.99 (95% CI = 0.92 to 1.11), respectively. Bland-Altman plot (Figure 2) did not show significant differences in data sets. 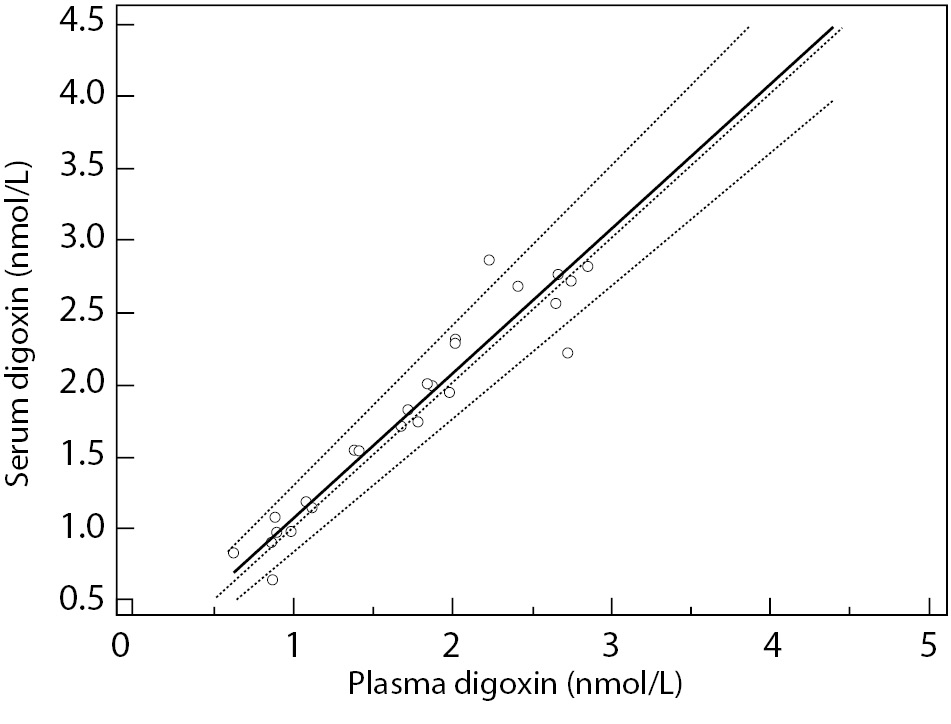 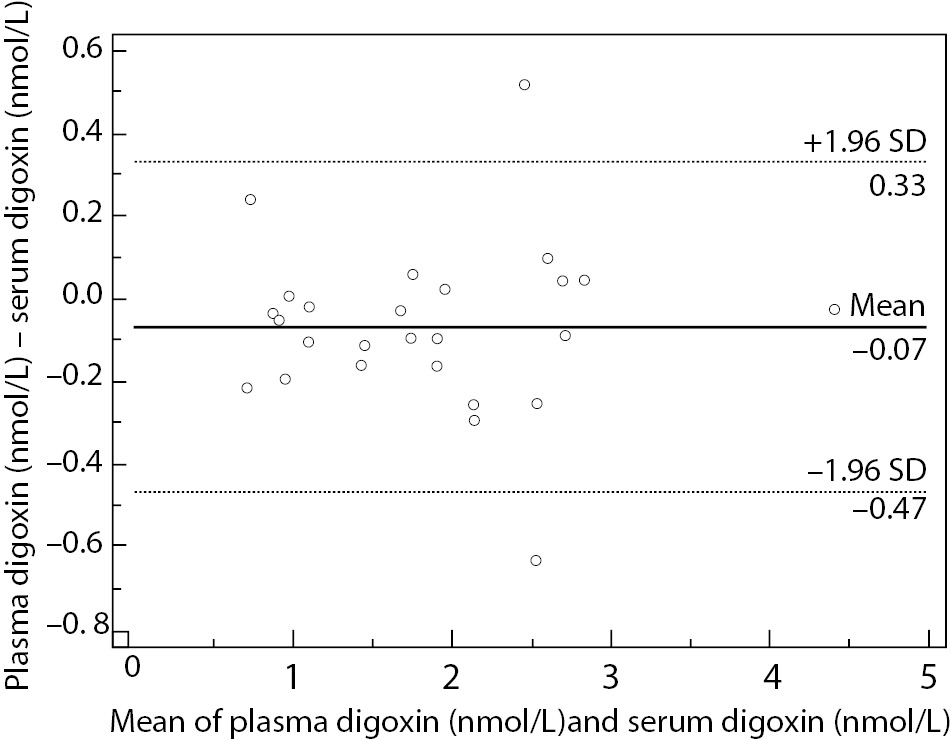 Figure 2. Bland-Altman plot represents scatter diagram of the differences between plasma and serum digoxin concentration in relation to their mean values.

Our study showed that digoxin concentration results obtained from venous plasma or serum plastic tubes can be used interchangeably. In manufacturers declaration regarding sample type there is recommendation to use only serum glass tubes. It would be more convenient to evaluate plastic serum tube vs. glass serum tube taking the glass tube as reference. As we use plastic tubes almost exclusively, we decided to take plasma plastic tube as the reference tube.
Preanalytical phase makes the most vulnerable part of the total testing process (7). There is a vast number of factors affecting correct and reliable process of patient identification, blood sampling and preparation for analysis. One of them is for sure specimen collection tube. There is a vast number of venous blood tubes available in the market. In order to secure reliability of test results, CLSI established protocol for tube validation for manufacturers similar to the protocols used for assay validation (11).
Plastic blood collection tubes are more resistant to breakage which makes them safer for handling in relation to glass tubes. Their weight is smaller and they are more convenient for disposal. On the other hand, glass tubes are more resistant to penetration of water or air into the collecting system and less susceptible on temperature changes (8,9,14). Most of the plastic tubes are produced from polypropylene (PP) and polyethylene terephtalate (PET) (15). In our study, PET tubes were used. They are generally considered more reliable regarding declared shelf life because of their ability to maintain vacuum. Their disadvantage in relation to PP tubes is inability to maintain proper concentration of anticoagulant because of liquid evaporation.
Routine clinical chemistry parameter results from different blood collection tubes were compared finding no significant differences for the most of the routine parameters (16). However, authors emphasized the importance of tube validation for prevention of possible errors in laboratory testing. Another study focused on routine hematology parameters and tested performance characteristics of different hematology tubes from various manufacturers. Testing was performed in specialized laboratory before their intended use and author found remarkable variations in quality of anticoagulants used and declared shelf-life (17). In the comparison study of glass and plastic tubes for digoxin concentration testing which included also study on storage effect no significant differences were found (18). We did not evaluate effect of storage in plasma or serum tubes for digoxin concentration.
Further efforts are needed in order to improve quality of all in-vitro devices and more strict regulations for manufacturers and end-users in order to avoid errors caused by inappropriate blood containers.
Limitations of our study are lack of glass tube as reference material and small number of samples included in validation protocol. It would be also interesting to check effect of storage in plasma and serum plastic tubes. Nevertheless, we managed to check the reliability of the testing in different matrix by simple method. For quality improvement it is necessary to record all the changes in testing process and evaluate their impact on patient results using the defined guidelines.
In conclusion, plasma heparin tubes and plastic serum tubes can be used interchangeably for monitoring of digoxin concentration.